Characterization of Gentisate 1,2-Dioxygenase from Pseudarthrobacter phenanthrenivorans Sphe3 and Its Stabilization by Immobilization on Nickel-Functionalized Magnetic Nanoparticles
Previous Article in Journal

Benzophenone-3 (BP3) is an organic UV filter whose presence in the aquatic environment has been linked to detrimental developmental impacts in aquatic organisms such as coral and fish. The genus Rhodococcus has been extensively studied and is known for possessing large genomes housing genes for biodegradation of a wide range of compounds, including aromatic carbons. Here, we present the genome sequence of Rhodococcus sp. USK10, which was isolated from Chinese riverbank sediment and is capable of utilising BP3 as the sole carbon source, resulting in full BP3 mineralisation. The genome consisted of 9,870,030 bp in 3 replicons, a G+C content of 67.2%, and 9722 coding DNA sequences (CDSs). Annotation of the genome revealed that 179 of these CDSs are involved in the metabolism of aromatic carbons. The complete genome of Rhodococcus sp. USK10 is the first complete, annotated genome sequence of a Benzophenone-3-degrading bacterium. Through radiolabelling, it is also the first bacterium proven to mineralise Benzophenone-3. Due to the widespread environmental prevalence of Benzophenone-3, coupled with its adverse impact on aquatic organisms, this characterisation provides an integral first step in better understanding the environmentally relevant degradation pathway of the commonly used UV filter. Given USK10′s ability to completely mineralise Benzophenone-3, it could prove to be a suitable candidate for bioremediation application. View Full-Text
Keywords: oxybenzone; UV filter; biodegradation; whole-genome sequencing; Rhodococcus oxybenzone; UV filter; biodegradation; whole-genome sequencing; Rhodococcus
►▼ Show Figures 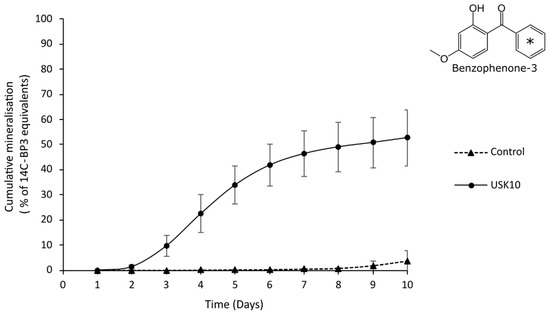