Partially substituted cerias are attractive materials for use as electrolytes in intermediate-temperature solid oxide fuel cells (SOFCs). Ceria doped with Sm or Gd has been found to have high ionic conductivities. However, there is interest in whether doping with multiple elements could lead to materials with higher ionic conductivities. The present study looks at the effects of co-doping Sr and Sm in ceria. A compositional series, Ce0.8+xSm0.2−2xSrxO2−δ (with x = 0–0.08), designed to have a constant oxygen vacancy concentration, was successfully prepared using the citrate–nitrate complexation method. A solubility limit of ~5 cation% Sr was found to impact material structure and conductivity. For phase-pure materials, with increasing Sr content, sinterability increased slightly and intrinsic conductivity decreased roughly linearly. The grain boundaries of phase-pure materials showed only a very small blocking effect, linked to the high-purity synthesis method employed, while at high %Sr, they became more blocking due to the presence of a SrCeO3 impurity. Grain capacitances were found to be 50–60 pF and grain boundary capacitances, 5–50 nF. The variation in the bulk capacitance with Sr content was small, and the variation in grain boundary capacitance could be explained by the variation in grain size. Slight deviations at high %Sr were attributed to the SrCeO3 impurity. In summary, in the absence of deleterious effects due to poor microstructure or impurities, such as Si, there is no improvement in conductivity on co-doping with Sr and Sm. View Full-Text
Keywords: solid oxide fuel cell; oxygen ion conductor; electrolyte; impedance spectroscopy; ceria; strontium solid oxide fuel cell; oxygen ion conductor; electrolyte; impedance spectroscopy; ceria; strontium
►▼ Show Figures 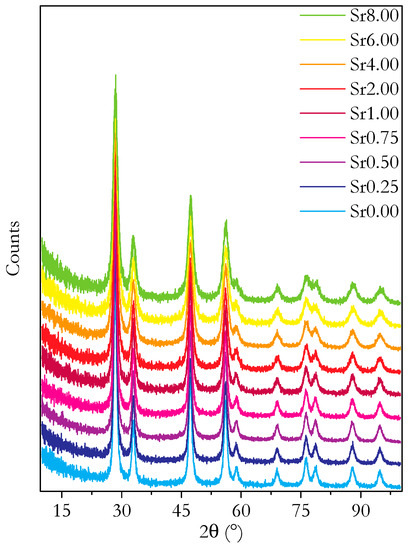