A Global Survey of Current Zoo Housing and Husbandry Practices for Fossa: A Preliminary Review

This study compared the resource use of juvenile zoo-living Chinese crocodile lizards, Shinisaurus crocodilurus crocodilurus across three observation windows, spanning nine months, accounting for time of day and lizard age, and under consistent environmental conditions. Lizards showed a significant difference in proportionate resource use, quantified using a modified spread of participation indices between the second and final sampling period, such that with increasing age, resources were more equally utilised. The time of day did not have a significant effect on resource use. Lizards in this study significantly increased their use of water bodies and branches outside the bask zone and decreased their use of the land areas within the bask zones over time. Resource use data suggests the importance of providing enclosures which cater to ontogenetic shifts in captive individuals or within mixed age groupings.
Keywords: resource; animal welfare; captive management; niche use resource; animal welfare; captive management; niche use

Understanding how individuals of a particular species utilise their enclosures and the resources available to them can help to inform captive management and enclosure design, as well as aiding in assessing animal welfare. One conception of animal welfare is described as how well an animal can cope in its environment [1,2]. Resource utilisation differences between age groups have been documented in several taxa but are not well studied in reptiles [3]. The size of an animal may impact resource utilisation in mixed age captive groups and may constrain juveniles to niches that are not being used by adults, regardless of whether or not it is appropriate for their welfare [4]. The restriction of available resources in wild animals may be influenced by competition, predation, and physiological constraints and tolerances, as well as often complex interactions between these variables [5,6]. The availability of environmental resources may have long-term impacts on growth in reptiles; in particular, limited access to heat sources may affect behavioural responses and the speed of biochemical reactions, impacting individual fitness [7,8,9,10]. To maintain the best welfare for animals in captivity, enclosure design may need to be adapted to meet the needs of individuals in mixed age groups, prevent the involuntary restriction of resources to certain subsets, and tailor enclosures to the ages of the animals. Furthermore, the management of reptiles in captivity should be based on the natural history of the focal species; therefore, to facilitate this, the best approach to take is the union of field and captive data [11].
The Chinese crocodile lizard Shinisaurus crocodilurus is a semi-aquatic, viviparous, diurnal species of lizard that specialises in occupying fresh water and evergreen broadleaf forests [12,13]. They are habitat specialists that exhibit a preference for small, remote streams along mountain ridges, within undisturbed, tropical forest [12,14,15]. This species is currently assessed as endangered [16] and is the only living species in the family Shinisauridae. There are two recognised subspecies: S. c. crocodilurus and S. c. vietnamensis [12]. This evolutionary distinctiveness coupled with a very restricted range, limited to riparian habitats within Southern China and Northern Vietnam, renders this species particularly at risk. Both in situ and ex situ conservation and efforts to expand the current knowledge of the natural history of this species are of high importance for the continued survival of the species [12,14,15,17].
Resource use preferences across ages in Shinisaurus crocodilurus is poorly documented in captivity, although resource partitioning has been shown to vary ontogenetically in other lizards [18,19]. However, wild habitat preferences in S. c. vietnamensis showed variation between juveniles and adults; juveniles typically favour low lying ferns, shrubs, and canes with a median height of ≈63.5 cm above water level, while adults perch within densely vegetated branches with a median height of ≈119 cm above water level. Lizards are rarely observed on the forest floor, but utilise refuges such as tree holes, rock shelters, densely vegetated perches, and utilise vertical over horizontal space [15,17]. Wild observations of adult S. c. vietnamensis found that animals are inactive for large proportions of the day; activity begins at sunrise, with peak activity during the morning and noon. However, hours of peak activity were not specified, so the timing of resource use through the day is unknown [17]. If the behaviour of captive lizards reflects that of wild animals, enclosures should be designed to allow equal opportunities to access resources, to benefit mixed age groups or to correlate with preferences as animals age. We assessed whether resource use in juvenile Shinisaurus crocodilurus alters with age, which would have implications for resource provision in captive settings.

Eight Shinisaurus c. crocodilurus animals born between 2 November 2019–25 November 2019, at around 4 g mass and 150 mm total length, from two separate females (six juveniles from one female and two from the other) were housed individually in 30 cm3 Exo Terra vivaria (Exo Terra, Alfeld, Germany) with a water depth of c. 6 cm, a land area comprised of cork bark, and branches c. 1 cm in diameter. Enclosures were furnished as similarly as visually possible, with identical layouts and the cork bark sections also being approximately equal; any differences due to the natural origins of the perching were considered negligible in terms of their utilisation by a lizard. Branch size was considered appropriate for this size, as adult S. c. crocodilurus have been reported to perch on branches with diameters <1 cm, while adult S. c. vietnamensis perch on branches of mean diameter c. 1.3 cm and juveniles occupy smaller stemmed canes, ferns, and shrubs [17]. Observations (see below) began on 12 February 2020 (Day 0). Vivarium size was increased to 45 cm3, and branch size was adjusted to branches ranging from c. 2–3 cm in diameter to cater for the increased size of the lizards on Day 202–215 (corresponding to the last observation period) when animals were around 15 g in weight. Water depth reached 10–11 cm in the larger vivaria, with temperatures ranging from 18–23 °C (night and day ambient temperatures, respectively). A 40 W incandescent lamp, later changed to an Arcadia 50 W Solar floodlight and a 6% Arcadia T5 UV lamp with reflector, provided localised bask zones, ranging between 26–31 °C surface temperature, and ultraviolet index (UVI) across the enclosure of 0–4. Minimum temperatures of 20.6 °C (day) and 17.5 °C (night) on the land area outside of the bask zone were recorded with an infrared thermometer. Room climate control provided ambient temperatures ranging from 18–23 °C. The lighting was adjusted when the animals were roughly 6 months old (between the first and second observation periods); bask temperatures were within the same temperature range between changes. Temperatures throughout the year were consistent, with no extreme seasonal variation. Animals were weighed every month using On Balance Digital Scales (Model: DT-1000; 0.1 g increments) and were not sexed at any point during the study; sex cannot be reliably distinguished from external morphology [17], and there was insufficient management requirements to justify sexing through invasive veterinary investigation.
Enclosures were divided into six resources; branches within the bask zone (BB), non-bask zone branches (BN), cork within the bask zone (CB), non-bask zone cork (CN), shorelines of the cork and submerged branches (S), and the water body (W). Resources in this study represent distinct areas which provide different opportunities to thermoregulate. Instantaneous focal sampling of resource use occurred at three time periods; the resource occupied by each lizard was recorded once anytime within the set time periods AM (8:00–11:00), midday (11:01–14:00), and PM (14:01–17:00) daily over three observation periods: days 0–35 (February/March), days 102–136 (May/June), and days 200–219 (August/September) from the start of the study. Instantaneous sampling of all individuals occurred in succession within the same observation periods. Observations were performed live, viewing through the front of the enclosure. This was predominantly performed by one person. However, due to work constraints a small percentage of the observations were performed by other keepers. Instructions on noting observations were given to maintain consistency in recording.
Mean proportionate surface areas for resources were calculated using ImageJ [20] from an image above the enclosure (Figure 1). Overlapping resources were taken into account when measuring, for example the full representative surface area of the water body was measured over the overlapping cork. Modified spread of participation indices (mSPI) [21], allowing for unequal zones, were calculated for each lizard at each time period in each observation period (i.e., a mSPI score was generated for AM, midday, and PM time periods in each of the three observation periods for each lizard). A mSPI is a measure of evenness of resource use, allowing for inequality of resource sizes; a mSPI value of 0 would indicate the maximum enclosure use, where all zones are used equally relative to size; while a value of 1 indicates that only one area is being utilised (21). A repeated measures ANOVA was performed on the mSPI data using the model mSPI = ObservationPeriod + TimePeriod + ObservationPeriod*TimePeriod. Data were normally distributed (Shapiro–Wilk test; p = 0.39) and did not violate sphericity (Mauchly’s test of sphericity; observation period, p = 0.287; time period, p = 0.812; observation period*time period, p = 0.247). Fisher’s LSD post hoc tests with bonferroni adjustments for multiple comparisons were then used to compare between treatments for significant variables. A Friedman test for repeated measures was then used to compare mean proportionate resource use (=number of observations in a given resource/total observations) for each lizard for each resource between observation periods. All statistical analyses were performed in SPSS 26.0 for Windows (IBM, Armonk, NY, USA).

Ethical review and approval were waived for this study, due to only naturally occurring behaviours being recorded during routine husbandry.

The data presented in this study are available on request from the corresponding author. The data are not publicly available due to institutional data sharing policies.

We thank all members of the Herpetology team at ZSL London Zoo who assisted in the husbandry of the animals in this work and inputted into the data collection; in addition to the authors, Francesca Servini, Joe Capon, Unnar Ævarsson, and Charlotte Ellis, and to Lewis Rowden for guidance and project administration. 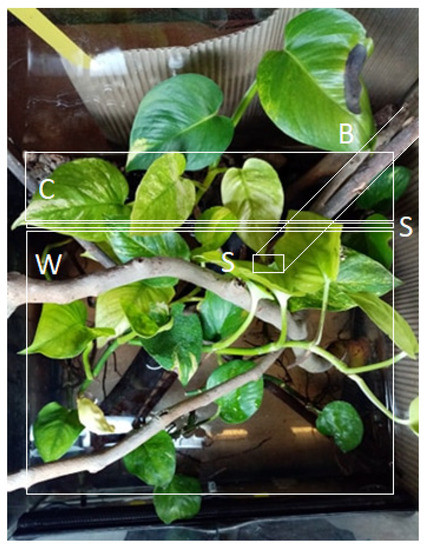 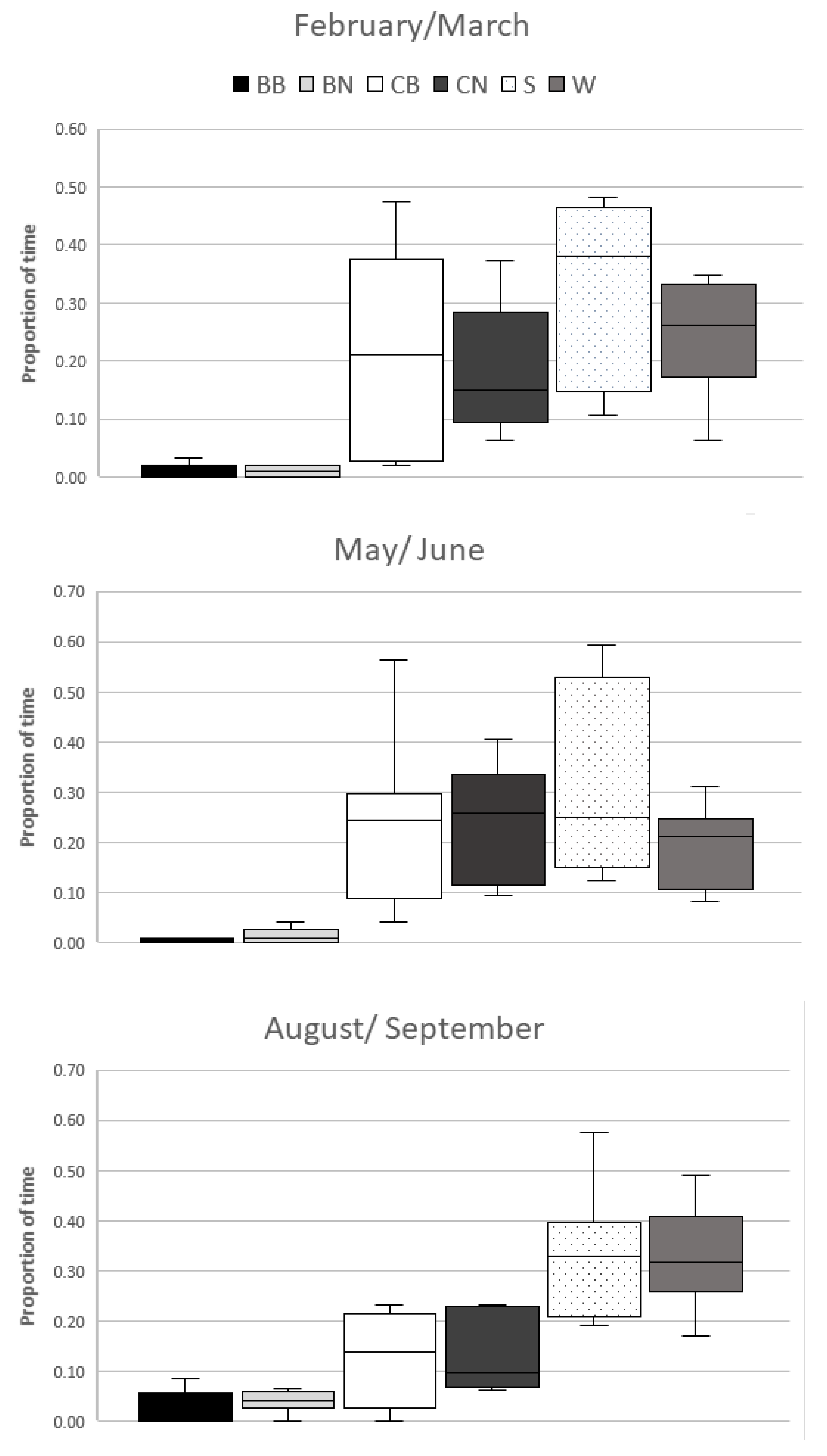