Conservation Education: Are Zoo Animals Effective Ambassadors and Is There Any Cost to Their Welfare?
Previous Article in Special Issue

In order to be successful and have high standards of animal welfare, modern zoos strive to regularly modify, improve, and build animal enclosures and visitor areas. However, these periods of development could result in temporary durations of sub-optimal welfare for animals housed nearby. In this study, we monitored the behavior of three Asiatic lions (Panthera leo persica) prior to, during, and following a period of construction on a nearby building. Our results provide evidence that welfare may have been temporarily reduced during the construction period. Compared to the pre-construction period, the male exhibited an increase in pacing behavior and all three lions reduced the time they spent resting. We infer that the most significant negative stimulus related to the construction was sound and/or ground vibrations, as a physical barrier ruled out stress from visual stimuli. The behavioral response to the construction work was relatively short-lived and no long-term changes were observed one year on. This research highlights the importance of measuring animal behavior around events outside routine husbandry, and considering animal welfare on an individual basis. Finally, this work adds to the body of literature surrounding the impacts of construction on animal wellbeing and outlines some suggestions for potential mitigation.
Keywords: behavior; welfare; lion; individual differences; sound; construction behavior; welfare; lion; individual differences; sound; construction

Modern zoos strive to maintain optimum animal husbandry and welfare, whilst also providing an outstanding visitor experience [1]. To achieve this, many zoos continually assess their exhibits and modify, improve, and build animal enclosures and visitor areas where appropriate. This construction work is vital for improving animal facilities, which subsequently enhance animal welfare and management practices, increasing visitor knowledge and relaying conservation messages, and for boosting income [2,3]. However, these periods of development have the potential to cause temporary disruptions to the welfare of animals housed nearby [4].
Animals in zoos are exposed to different types of stimuli to those experienced in a natural setting, including noise from visitors, the presence of vehicles, and routine husbandry practices [5]. A number of studies have shown that construction or machinery noise can act as a novel, undesirable stimuli and have adverse effects on zoo animal behavior [6,7]. For example, during periods of construction, snow leopards (Unica unica) [8] and giraffes (Giraffa camelopardalis) [9] increased their proximity to other individuals in the group, suggesting an increase in threat perception. Sulser et al. [8] found that under noisy conditions, snow leopards at Basel Zoo spent significantly less time utilizing their outdoor enclosure, compared to quiet days. Jakob-Hoff et al. [9] showed that giraffes, Asian elephants (Elephas maximus), and emus (Dromaius novaehollandiae) displayed an increase in behaviors indicative of stress, including vigilance and locomotion, in response to increased sound exposure. A female anteater (Myrmecophaga tridactyla) at Disney’s Animal Kingdom also exhibited an increase in negative welfare indicators and a decrease in positive welfare indicators, which included physical, behavioral, and husbandry parameters, attributed to an increase in construction-related activity and sound levels in the area [10]. A significant increase in fecal glucocorticoid metabolite concentrations and decrease in visibility were found in felids in response to construction work at Lincoln Park Zoo [11].
It has also been demonstrated that individuals of the same species can show varying responses to the same environmental stimuli. While a male giant panda (Ailuropoda melanoleuca) at the Smithsonian’s National Zoological Park was found to spend more time close to the work site during a demolition period, the female exhibited no change in enclosure use [4]. Individual differences in response to construction work has also been found in servals (Leptailurus serval) [11]. A review by Ijichi et al. [12] suggested that differences in reactions to the same stimuli can be explained by examining the personalities of individuals. Individuals that score highly for neuroticism as a personality factor are more sensitive to stressors, which is often suggested as a trigger for stereotypic behavior [12]. Carnivores are of particular concern due to their propensity to exhibit stereotypic behaviors in captivity, of which pacing is the most commonly observed [13,14].
It is important to monitor behavior during events outside of normal husbandry practices (such as construction work) in order to understand what impact (if any) they have on individual animal welfare and how this can be mitigated. In this study, we monitored the behavior of three Asiatic lions (Panthera leo persica) at Chester Zoo, UK, prior to, during, and following a period of construction work on Oakfield House, located adjacent to their enclosure, which was renovated and converted into a restaurant. The first aim was to quantify the behavioral response, as an indicator of welfare state, to the three conditions, with a focus on natural active behaviors, resting behavior, pacing behavior, and visibility, and secondly, to investigate whether these responses were different between the three individuals.

Data were collected at Chester Zoo, Chester, UK, with the subjects being three 9-year-old Asiatic lions: two related females (full sisters, F1 and F2) and one unrelated male (M). They were housed in a 2255 m2 enclosure, comprised of an indoor den and a multi-substrate outdoor exhibit with varying height levels created by a grassy mound in the center. Aside from keeper maintenance times, the group had 24-h access to the entire enclosure.

Observations took place on weekdays only (little construction work took place on Saturday or Sunday) and the total observation time was 120 h. Data were collected during three conditions:
For each condition, we used 30-s time interval group scan sampling over a 60-min observation period per day using a pre-determined ethogram (Table 1). Behaviors of interest included pacing and resting, while other active behaviors (that did not include pacing) were grouped into a ‘natural active’ category (Table 1). Time spent out of sight from the observer was also noted. All observations took place from the visitor viewing areas of the exhibit, which had a full view of the outdoor exhibit. Observation times were between the hours of 09:00–17:00 (no construction work occurred outside of these times), with an equal number of observations per hour across three conditions. Data were collected by three observers, achieving >90% inter-observer reliability.
There were no other major management changes for the group throughout the observation period other than an annual ‘Lanterns’ evening event running from November–December in 2017 and 2018. In 2017, the event ran for 20 days (24–26 November, 1–3 December, 8–10 December, 15–17 December, 20–23 December, and 27–30 December). In 2018, there were 9 days during the study period (23–25 November, 30 November–2 December, 7–9 December). A previous analysis of data collected on-site showed no significant behavior change following a ‘Lanterns’ evening event, which has been running since 2011 [15].

Statistical analyses were conducted in R (version 3.6.2) [16]. As the aim of this research was to explore individual differences in response to construction, the behavior of each lion was analyzed separately. Following Shapiro–Wilk tests, non-parametric statistical tests were used after transformations failed to normalize the data. We treated days as the experimental unit and accepted the pseudoreplication; therefore, the results are not applicable to the wider population [17]. Kruskall–Wallis tests were used to compare time spent in each of the behavioral categories (i.e., natural active, pacing, resting, and out of sight) for each lion across construction periods (‘pre’, ‘during’, and ‘post’). Post hoc Dunn’s multiple comparison tests were used to determine if differences were significant between the three conditions; the p values reported are adjusted using the Bonferroni correction. Results are presented in graphical form using median and interquartile range (IQR), however, due to the number of zeros reported within some behaviors, the mean percentage of time (plus standard error) has also been included in table format to describe the relative frequency of the behaviors of interest.

This research has been approved by the Chester Zoo Science Committee (reference number 2016.27).

The authors would like to thank the students who assisted with the project, the Carnivore Team and Mammal Curators at Chester Zoo for their support and facilitation of this research, and four anonymous reviewers for their valuable feedback. 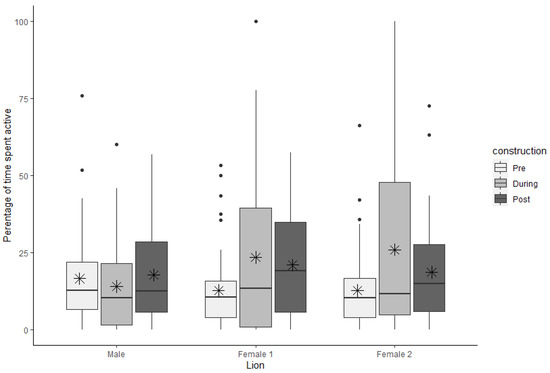 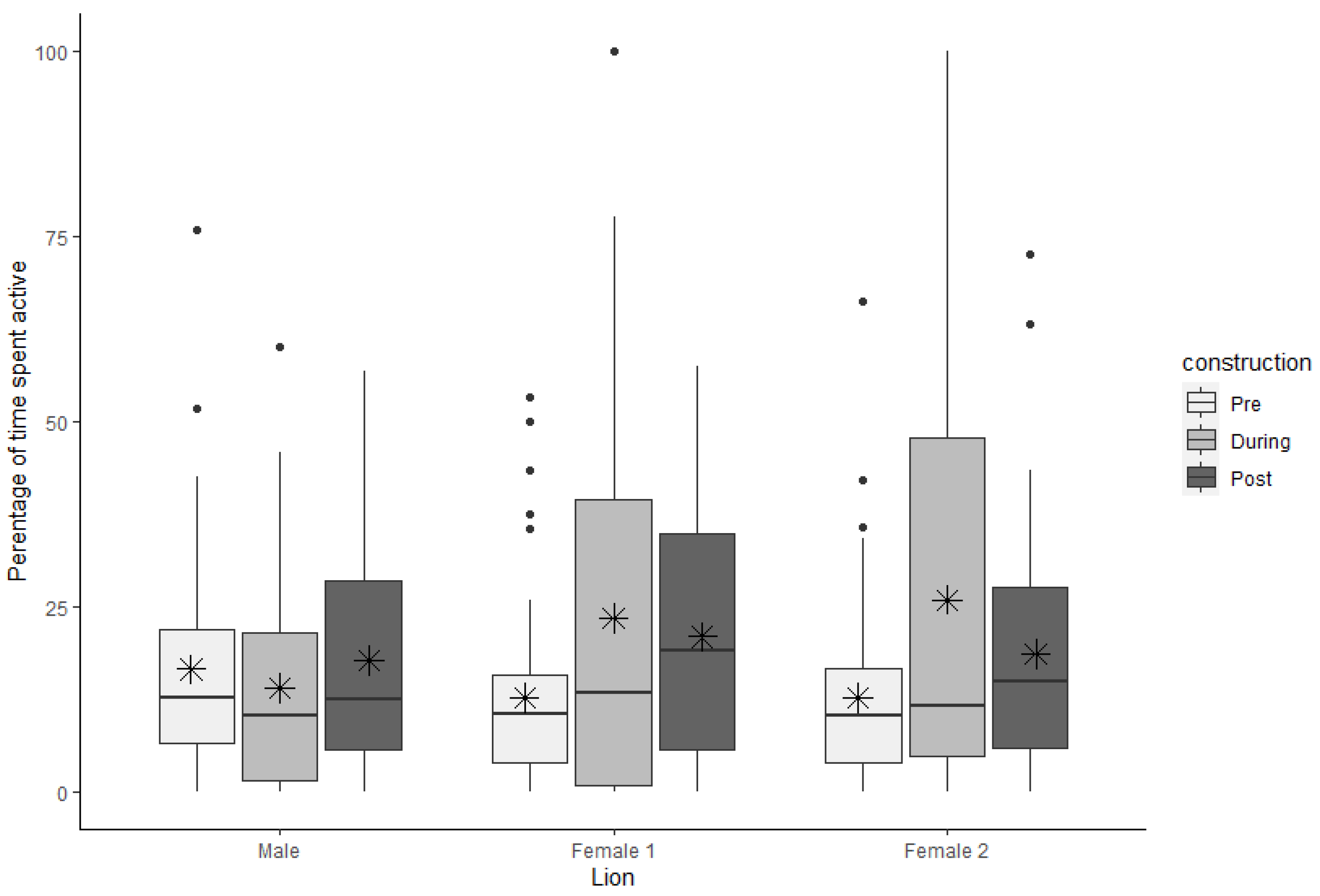 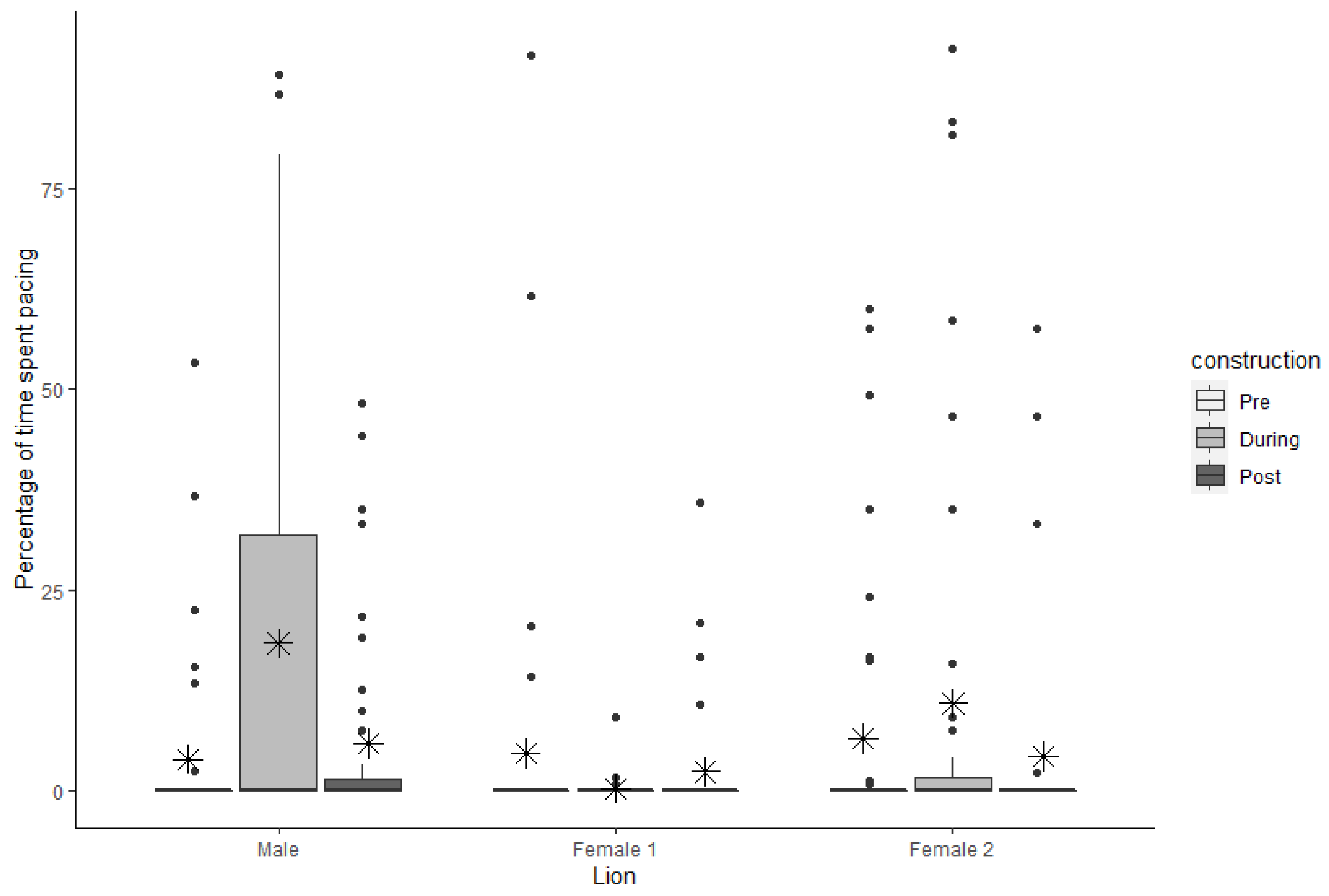 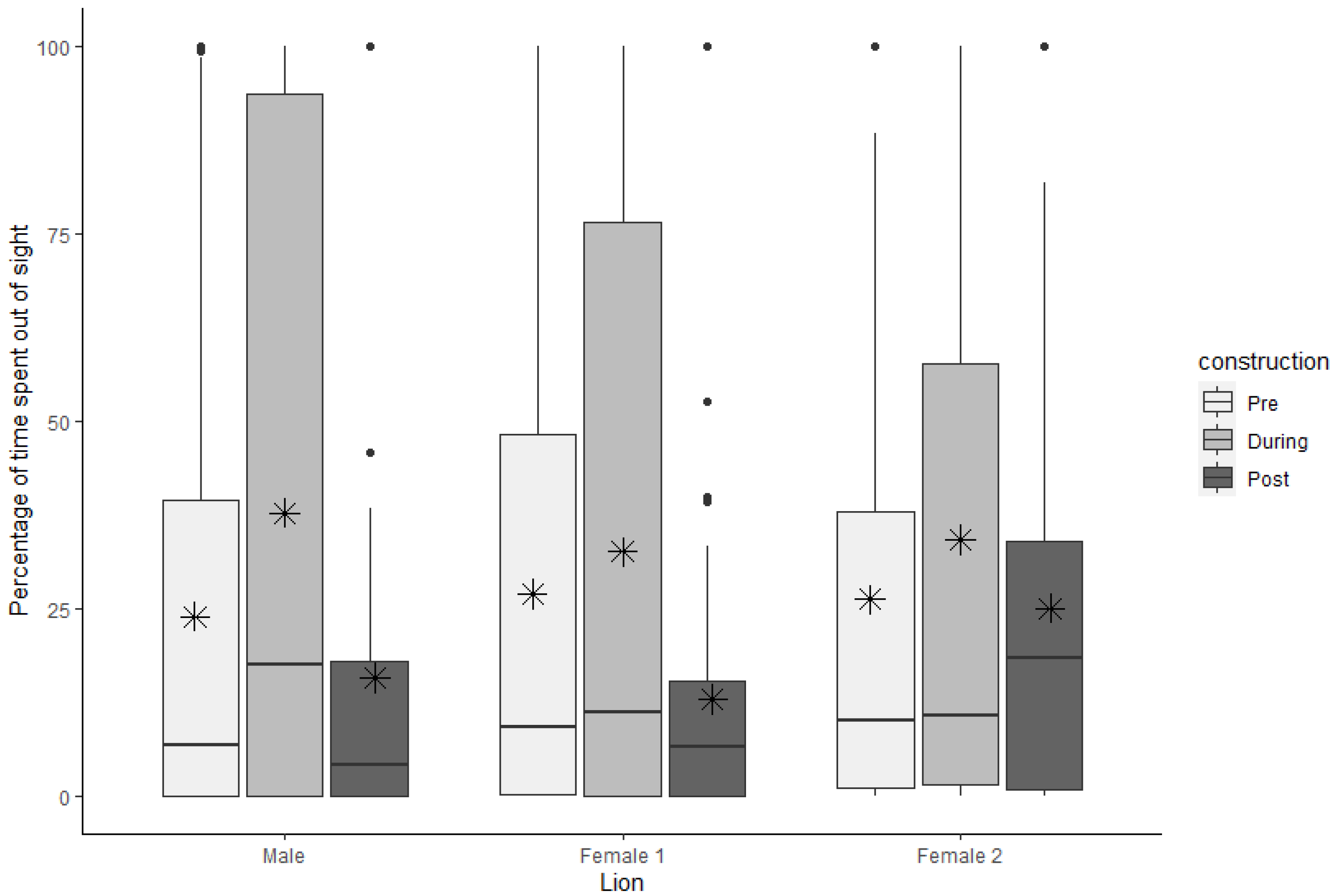