A cross-sectional, descriptive-correlational design was performed at the initial phase of the study that was followed by a parallel group trial design where a perfectionism-focused CBT group intervention was compared with a no intervention concurrent control. The allocation ratio was 1:1.

Participants were recruited through posters displayed in two universities of the city of Thessaloniki, Greece, and also through posts in social media pages of various departments of both universities. Two-hundred and fifteen participants responded and completed the questionnaires (Figure 1). Inclusion criterion was the degree of perfectionism as it is reflected by the total score in the Frost Multi-Dimensional Perfection Scale (without the FMPS subscale of Organisation). Mean value of the FMPS plus one standard deviation was the cut-off point [59,60,61,62]. Students with FMPS scores higher that the cut-off point were considered for participation in the study. Appropriate candidates that were invited for the study were 135, and 60% of them (n = 81) consented to participate in the second phase of the study. Mean age was 21.95 (SD= 3.62, range 18–40). Participants were randomly allocated to the intervention group (IG; n = 40) and the control group (CG; n = 41). Thirty-four participants completed the second phase of the study. Intervention completers were 19 participants (Mage = 22.47 SD = 2.55, 73.7% females). Control group completers consisted of 15 participants (Mage = 19.80 SD = 0.86, 86.7% females).
Participation in the study was on a voluntary basis, and no money or credits were given to participants. The research was approved by the ethics committee of the university.

Frost Multi-Dimensional Perfection Scale (FMPS) [1]: Frost et al. [1] hypothesised that perfectionism is based on six dimensions. In their model, the first dimension was concern over mistakes (CM). The second dimension was (Personal Standards, PS) setting high and relatively inflexible standards for personal performance since perfectionists tend to set high goals that are almost impossible to meet adequately. The third (Parental Expectations, PE) and fourth (Parental Criticism, PC) dimensions were the perception of the degree to which individuals perceive their parents as exceptionally demanding or critical. The fifth dimension (Doubts about Action, D) of perfectionism was the tendency to question the quality of one’s performance, emphasizing the overall feeling that it is not satisfactory. Finally, the sixth dimension (Organisation, O) concerns Organisation, as people with high perfectionism seem to accentuate order and accuracy [1]. The first five subscales represent the core dimensions of the FMPS, so the Organisation subscale is excluded when calculating the FMPS total score. The scale consists of 35 items that assess perfectionism in the aforementioned six dimensions. High scores on the Organization subscale are not intrinsically problematic but, combined with high scores on the other factors, may exacerbate dysfunction. The questionnaire is scored in 5-point Likert scale ranging from 1 (strongly disagree) to 5 (strongly agree). Good internal consistency and convergent validity with other measures of perfectionism have been demonstrated within community and clinical samples of adults [1,63]. In the present study, the Cronbach’s alpha for the total scale was 0.89, and Cronbach’s alpha for the subscales ranged from 0.76 to 0.88.
Depression Anxiety Stress Scale-21, (DASS-21) [64]: The scale assesses negative feelings and the degree to which the individual experiences these feelings. It consists of 21 items grouped in three subscales: (i) Depression, (ii) Anxiety, and (iii) Stress. There is evidence for high internal consistency for the subscales and good fit for the three-factor structure of the measure [65]. In the present study, we used the Greek version of DASS-21 [66]. In the present study, Cronbach’s alpha for Depression, Anxiety, and Stress subscales were 0.90, 0.84, and 0.86, respectively.
Spielberger State-Trait Anxiety Inventory (STAI) [67]: The scale is a 40-item questionnaire assessing two types of anxiety—(i) state anxiety, or anxiety about an event and (ii) trait anxiety, or anxiety level as a personal characteristic anxiety. Participants answered on 4-point Likert scale from 1 (never) to 4 (always). The State-Trait Anxiety Inventory (STAI) is a reliable and valid measure that has been extensively used in research and clinical practice. It has been translated and validated in the Greek language [68]. In the present study, the State subscale had a Cronbach’s alpha of 0.90, and the trait subscale had 0.80.
Measure of Parental Style (MOPS) [69]: This scale consists of 15 items that assess the perceived parenting styles. There are different subscales for Mother and Father. The MOPS focuses on three parenting styles of Indifference, Abuse, and Overcontrol. The questionnaire is scored in a 4-point Likert scale ranging from 0 (not true at all) to 3 (extremely true). The sum of each subscale shows the degree to which that parental style was experienced by an individual. In the present study, the Cronbach’s alpha for MOPS subscales ranged from 0.66 to 0.93.

Call for participation in the study was announced through posters displayed in universities of Thessaloniki and through posts in social media pages of various schools of both universities. Participants were instructed to follow a link to a page that included information about the research, consent forms, and the questionnaires. Two-hundred and fifteen adults completed the questionnaires. Adults that reported high perfectionism in the self-reported FMPS questionnaire (at least one standard deviation above the mean score of the present sample) were invited to participate in the intervention study. From this initial sample, 135 (63%) participants presented high perfectionism, but only 81 (60%) of them opted to continue and were selected for the program. Participants were allocated either to the intervention or the wait-list group. Researchers used a schedule from a random number generator to assign participants to intervention (IG) or control group (CG).
The intervention lasted 10 weeks and consisted of two-hour weekly sessions. Consequently, the second measurements in both groups took place after 10 weeks. Nineteen participants out of forty from the intervention group completed the intervention program and the post- intervention measurement (Time 2). Participants in the IG who were absent for two consecutive sessions were excluded. If a participant was not able to attend a session, there was a filler session in between. The drop-out rate was 52.5%. Concerning the control group, 26 out of the original 41 failed to respond to the 2nd assessment.
The intervention protocol included the following sections: (i) The identification of dysfunctional/unhealthy perfectionism and those factors and behaviours that contribute to its maintenance; (ii) the recognition of dysfunctional thinking and the modification and reduction of dysfunctional behaviours; (iii) the application of behavioural experiments to challenge dysfunctional thoughts and to expose the individual to conditions they previously avoided; (iv) the application of cognitive techniques to reshape inelastic patterns and reduce self-criticism when high expectations are unmet; (v) the modification of cognitive distortions; and (vi) the application of cognitive-behavioural techniques to reduce related ineffective behaviours, such as procrastination [27,54,55].
Ethics approval was granted for this study by the Research Ethics and Deontology Committee of the University of Macedonia. The study was funded by Greece and the European Union (European Social Fund–ESF) through the Operational Programme «Human Resources Development, Education and Lifelong Learning 2014–2020».

Table 1 shows the means and standard deviation of all measures in Time 1 before the randomization into two groups.

Table 2 shows all the correlations among FMPS subscales and the other measures. There was a significant correlation among most variables.

Overall, the present results suggest that parenting style is associated with the development of specific, maladaptive aspects of perfectionism. In addition, it shows clearly that a ten-session, cognitive-behavioural group intervention can be effective in the management of maladaptive perfectionism. Furthermore, the CBT intervention addressing perfectionism may also be beneficial for individuals with other difficulties related to clinical perfectionism, such as anxiety or other symptoms. More research is, however, needed to determine its efficacy in the long-run. Further research in the drop-out rate will be useful in the future to examine why some people commit to the therapeutic process while others do not. Finally, further research on related variables, as potential predictors of treatment outcome, will be important in order to improve therapies. As Egan et al. [27] suggested, an important clinical implication is that, if perfectionism is elevated in a patient to the degree that interferes with their quality of life, then it should be addressed directly in therapy, particularly if it appears to undermine change.

This research is co-financed by Greece and the European Union (European Social Fund- ESF) through the Operational Programme «Human Resources Development, Education and Lifelong Learning 2014–2020» in the context of the project “A randomized, controlled CBT intervention for maladaptive perfectionism: Outcome and predictors” (MIS 5047241).

The study was conducted according to the guidelines of the Declaration of Helsinki and approved by the Institutional Review Board (or Ethics Committee) of University of Macedonia. 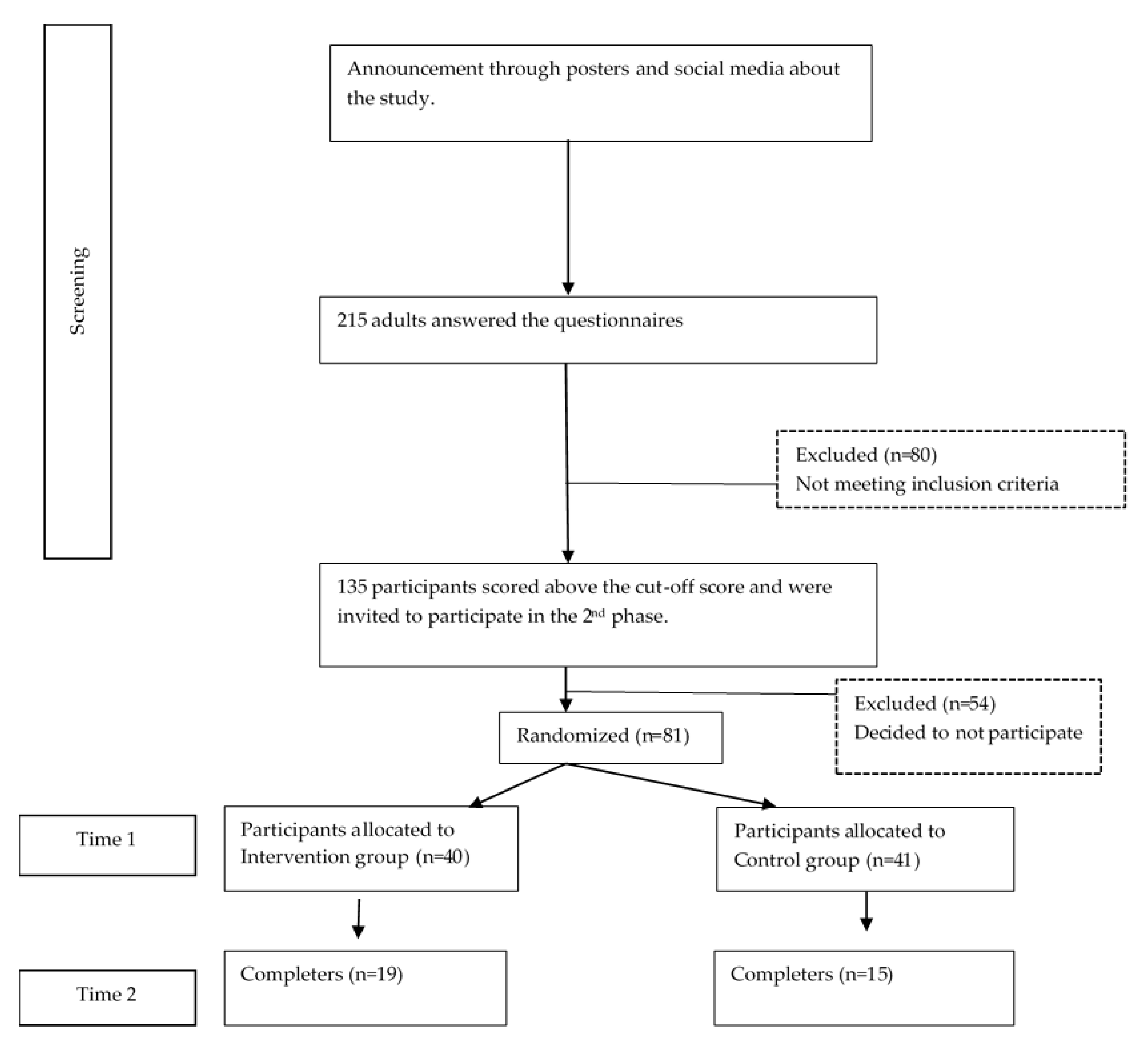