The Air Quality during the Confinement and Coronavirus 2020–2021 Period: The Case of Tunisia

Extratropical cyclones (ECs) are a synoptic phenomenon that typically cause severe weather in midlatitudes, including heavy rainfall and strong winds [1,2,3,4,5,6]. Chang et al. [7] showed that ECs play an important role in the poleward transport of heat and momentum. In the North Atlantic and Northern Europe, rainfall associated with cyclones account for 70–80% of total precipitation [8].
ECs intensity and the amount of precipitation are linked to the processes of transport and distribution of moisture during their development phases [9]. Moreover, it has been accepted that the moisture transport intensity is significantly different at different times, mainly depending on the location and intensity of the cyclone [10]. Regarding moisture transport mechanisms in ECs, Sodemann and Stohl [11] showed that individual cyclones were responsible for the formation and maintenance of atmospherics rivers (ARs). However, very long ARs require more than one cyclone to be maintained before the moisture is released as precipitation [9]. Some studies consider that ARs are portions of the EC system [12,13,14,15]. Furthermore, Gimeno et al. [16] pointed out that ARs are associated with the pre-cold frontal region and the warm conveyor belt [17] of ECs.
ECs transport and distribution processes have been broadly discussed, as well as the origin of their moisture. Stohl and James [18] investigated an extreme precipitation event over Europe associated with an EC, identifying the Mediterranean Sea as the major evaporation source region of the water that became precipitation. These authors, also, identified that the trajectories of the particles involved in the EC describe pathways from North Africa, which gained moisture over Argelia and Mediterranean Sea. Dacre et al. [15] used the water vapor budget of 200 ECs to determine that tropical moisture reaching the extratropics only contributes to mid-level moisture, above the boundary layer. Additionally, Zhao et al. [10], for a heavy snowstorm over northeastern China, caused by an EC featuring a back-bent warm front structure, found that the moisture mainly comes from the middle and lower troposphere.
Specifically, in the Iberian Peninsula (IP), where 85% of recorded precipitation and wind-extreme events are clearly associated with ECs [19], western IP coasts are the areas most exposed to ECs [20]. According to the results in Hénin et al. [19], in this region the winter climatological is mostly driven by the North Atlantic flux and moisture transport. Moreover, Eiras-Barca et al. [21] studied an explosive cyclogenesis occurring in October 1987 northwest to the IP. The related AR event resulted in record winds of 100 km h−1 and daily precipitation of over 100 mm day−1 in Galicia (on the northwestern corner of the IP) and Portugal. The authors discovered, for this event, that more than 60% of the resulting precipitation was of tropical origin.
To estimate moisture sources and sinks, several authors have used Lagrangian and Eulerian moisture tracking models extensively. The Lagrangian technique is able to track the particle transport routes and moisture gain/loss along the trajectories, while Eulerian ones have limitations to clarify the moisture sources and processes affecting moisture accumulation (see Gimeno et al. [22] and references therein). The Lagrangian approach has been widely applied to understand the hydrological cycle in more than a few regions around the world, e.g., [10,18,23,24,25,26,27,28,29,30,31,32].
Considering that the origin of moisture in ECs is still an important discussion, the aim of this work was to investigate the moisture sources for the explosive cyclogenesis Miguel developed over the North Atlantic on 4–9 June 2019 through a Lagrangian backward-trajectory technique. We selected the EC Miguel as the case of study due to its significant impact in the region [33], and the alarming projections of natural hazards attributed to these types of meteorological systems [34,35,36,37].
According to the Spanish Agency of Meteorology (AEMET, spanish acronym) [33], when Miguel moving towards the east, in the North Atlantic, it underwent an explosive cyclogenesis near the Galicia coast. Later, Miguel moved quickly towards France and the British Isles. Finally, it continued moving to the northwest until it reached Scandinavia, where it completed its life cycle. Among the ECs that have affected Europe in the May–June period from 1979 to 2019, Miguel is considered peculiar because it exhibits an unusual explosive cyclogenesis and a very exceptional track record for this type of event during this period of the year [38].

In this study, we used the European Center for Medium-Range Weather Forecasts (ECMWF) ERA-5 reanalysis [39] and ERA-Interim reanalysis [40]. The FLEXPART model [41] was forced by ERA-Interim data with horizontal grid spacing of 1° of latitude by longitude and 61 vertical levels, from 1000 to 0.1 hPa. From ERA-5, we extracted the geopotential height data at the constant pressure level of 1000 hPa (z1000), Vertically Integrated Moisture Flux divergence (VIMF), and the sea-level pressure every 6 h (0000, 0600, 1200, and 1800 UTC), on a regular latitude longitude grid 0.25° in horizontal resolution.

To investigate the moisture sources for EC Miguel, the outputs from the Lagrangian particle dispersion model FLEXPART v9.0 [41] were used from 0000 UTC 4 June to 1800 UTC 9 June. The global model simulated the trajectory of approximately 2.0 million particles homogeneously distributed in the atmosphere. Particles were then allowed to move freely with the winds for the duration of the simulation [18]. Model global outputs were obtained every 6 h on the initial grid resolution (1° × 1°).

2.3. Trajectory of the Explosive Cyclogenesis Miguel and Characteristic

Using the University of Hamburg approach [42], the EC center was determined as local minima in the geopotential 1000 hPa field. The radius from Miguel center was set to 400 km, in accordance with the results of Pepler and Dowdly [43]. Figure 1 shows the trajectory of Miguel from 0000 UTC 5 June to 1800 UTC 9 June.
To estimate the period of explosive cyclogenesis, the normalized deepening rate (NDR) criterion of Sanders and Gyakum [44] was applied. These authors proposed an EC as explosive cyclogenesis when the surface pressure drop in the center of the low was higher than 24 hPa in 24 h, at a normalized latitude of 60° N, following Equation (1): where is the pressure drop in hPa in 24 h; and is the mean latitude (in degrees) of the center of the cyclone during the 24 h period.
Figure 2 shows that the NDR exceeded, by the first time, the limit value of 1 at 1200 UTC on 6 June. This suggests that the explosive cyclogenesis started from 5 June at 1200 UTC, intensifying even more still 18 UTC 6 June, and it occurred over the North Atlantic Ocean near northwest IP, as is shown in Figure 3b. Naray [38] showed that the intensification of Miguel was favored by the presence at low levels of a baroclinic region and an intense AR. At high levels, atmospheric conditions were characterized by a local intensification of the Jet Streak in western Europe, and a possible downstream development caused by the existence of a quasi-stationary Rossby wave in the North Atlantic.

Following Stohl and James [18], from the FLEXPART output, changes in specific humidity over time (dq/dt) were used to diagnose the moisture budget of a particle. The net rate of change of the water vapor content of a particle was estimated as: where (e − p) represents the freshwater flux in the parcel.
The sum of all the (e − p) values for all particles residing in a specific atmospheric column over an area A represents the surface freshwater flux over. It was computed as: where E is the evaporation rate per unit area and P is the precipitation rate per unit area. It is possible to identify the regions where particles either gained (E − P > 0) or lost (E − P < 0) moisture along their path towards the selected area. The enclosed area by the radius of each EC Miguel track position was selected as the target region for the analysis of their moisture sources. Thus, the particles within this contour were tracked backward in time up to 10 days, which is typically used in the Lagrange approach as the estimated residence time of the water vapor in the atmosphere [45,46].

P.C.-H., A.P.-A., R.N. and L.G. conceived the idea of the study; P.C.-H., J.C.F.-A., and A.P.-A. processed the data and created the figures. P.C-.H. carried out the formal analysis and wrote the first draft of the manuscript. All authors have read and agreed to the published version of the manuscript.

The datasets used in this study are freely available on internet. The ERA-5 reanalysis datasets were extracted from ECMWF web, available online: https://www.ecmwf.int/en/forecasts/datasets/reanalysis-datasets/era5 (accessed on 21 March 2021) and the ERA-Interim are public at ECMWF datasets, available online: https://www.ecmwf.int/en/forecasts/datasets/reanalysis-datasets/era-interim. The FLEXPART outputs to reproduce our results are available upon request. 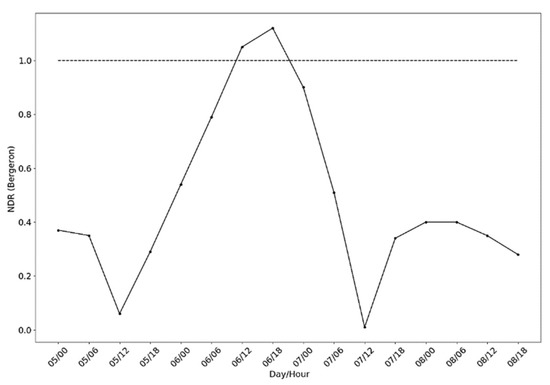 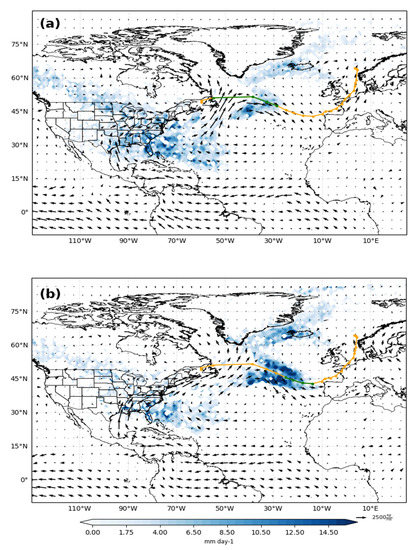