The Business Side of Ecosystem Services of Soil Systems

Unawareness and Theorizing in Modern Geology: Two Examples Based on Citation Analysis

Progress in science is significantly influenced by the treatment of information generated by the international research community. A relevant problem is the unawareness of scientists regarding more widely published works and ideas. This problem is illustrated with two examples from geological studies. In the first case, the citation analysis implies that many geologists still use outdated reconstructions regarding eustasy for the Mesozoic–Cenozoic, and important updates are missed. This erroneous practice leads to the accumulation of questionable regional interpretations. In the second case, it is found that studies in which the end-Pleistocene extraterrestrial impact hypothesis was first proposed are cited more prolifically than contrary studies using arguments against this hypothesis.A kind of ‘abandonment’ of this still debatable but potentially important hypothesis also is found. The root cause behind such a patterns of unawareness by the research community is explained by insufficient attention being paid by today’s geologists to critical literature reviewing, the rare use of bibliometric approaches, and, more generally, limited theorizing (especially in comparison to social sciences). A shift to full-scale theoretical geology is proposed, which would also help to minimize any negative consequences brought on by unawareness of a more global information base. View Full-Text
Keywords: bibliometry; eustatic curves; knowledge gaps; Pleistocene event; theoretical solutions bibliometry; eustatic curves; knowledge gaps; Pleistocene event; theoretical solutions
►▼ Show Figures 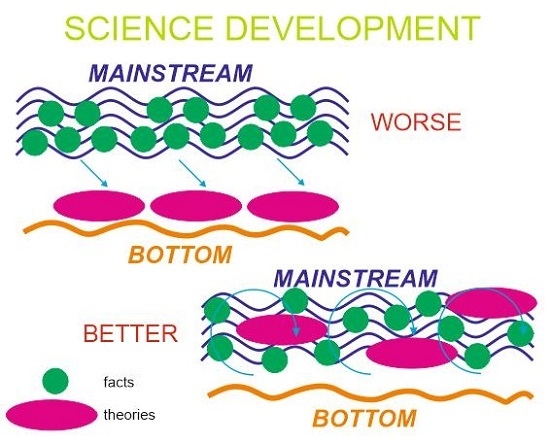