Once lithium-ion batteries degrade to below about 80% of their original capacity, they are no longer considered satisfactory for electric vehicles (EVs), but they are still adequate for second-life energy storage applications. However, once this level is reached, capacity fade increases at a much faster rate, and the spread between the cell capacities becomes much wider. If the passive equalizer (PEQ) from the EV is still used, battery capacity remains equal to that of the worst cell in the stack, just like it was in the EV. Unfortunately, the worst cell eventually becomes much weaker than the cell average, and the other cells are not fully utilized. If operated while the battery is in use, an active equalizer (AEQ) can increase the battery capacity to a much higher value close to the cell average, but AEQs are much more expensive and are not considered cost effective. However, it can be shown that the bilevel equalizer (BEQ), a PEQ/AEQ hybrid, also can provide a capacity very close to the cell average and at a much lower cost than an AEQ. View Full-Text
Keywords: equalizers; battery management system; lithium batteries; second life; EV; energy storage equalizers; battery management system; lithium batteries; second life; EV; energy storage
►▼ Show Figures 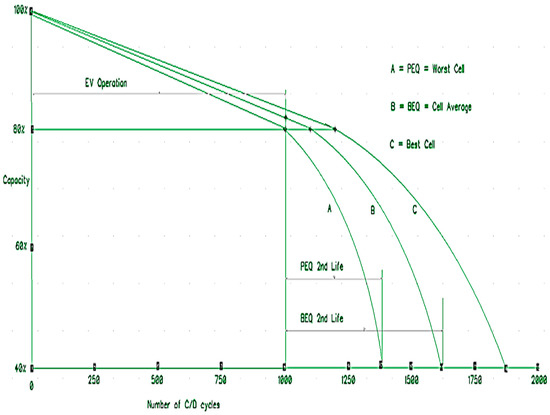