A critical characteristic for continuous monitoring using DNA biosensors is the design of the microfluidics system used for sample manipulation, effective and rapid reaction and an ultra-low detection limit of the analyte. The selection of the appropriate geometrical design and control of microfluidic parameters are highly important for the optimum performance. In the present study, a number of different shapes of microchambers are designed and computationally assessed using a Multiphysics software. Flow parameters such as pressure drop, and shear rates are compared. Three-dimensional printing was used to construct the designs and an experimental investigation is underway for the validation of the computational results.
Keywords: microchamber design; microfluidics; simulation; DNA biosensor; 3D printing microchamber design; microfluidics; simulation; DNA biosensor; 3D printing

Continuous monitoring is actively used in the medical practice as it allows for the constant monitoring of biomarkers. This facilitates timely and accurate diagnosis, which is followed by medical treatment. Genome sequencing is a method that deciphers huge amounts of data that are present in a DNA samples and is vital for detecting mutations and pathogens [1]. The analyte can be studied with the utilisation of a biosensor, a device which converts biochemical reaction into readable signal [2].
There are many methods of sample manipulation [3] used in laboratories, one of which is microfluidics. It has gained significant interest over recent years and has become an integral part of modern biosensors [4]. Among the many advantages of microfluidics are rapid reaction and ultra-low detection limit of the analyte [5].
In order to conduct the analysis, the microfluidic structure should provide a uniform fluid flow. One way of achieving this is changing the internal geometry of a microfluidic chamber. In this study, several computational simulations in COMSOL Multiphysics were conducted to assess how different chamber shapes influence the flow parameters. Based on the results, a number of recommendations regarding the microfluidics chamber design are proposed.

In the present work, nine different chamber designs were simulated and compared quantitatively as shown in Figure 1.
The physical domain that was analysed for every chamber design consisted of a typical microfluidic domain with an inlet section, a chamber and an outlet section as it is depicted in Figure 2. In the simulations, the fluid flow had an initial velocity of 0.01 m/s and was considered to be laminar. The fluid used in this scenario had a density of 1080 kg/m3 and a dynamic viscosity of 1.75 mPa·s. The total length of all microfluidics configurations that were analysed was constant and equal to 26 mm, except for the focus flow chamber design which had a length of 100 mm. The thickness of all domains was equal to 2 mm and sharp edges were smoothened using fillets with radii of 1 mm. Seven cases were analysed for determining the influence of the chamber design, one case featured the trifurcation of chambers and one case included multiplication of inlets and outlets.

The fluid flow is governed by the system of the Reynolds-Averaged Navier–Stokes partial differential equations and can be solved numerically using the finite element method [6,7,8]. In this work, the commercial software COMSOL Multiphysics was utilised in order to analyse the flow and obtain data regarding the distribution of the flow parameters inside the microfluidics circuit. To achieve this, the Laminar flow module with a Stationary time-independent study was selected. Inlet boundary condition (BC) was assigned to the respective inlet, Outlet BC was assigned to the outlet, while all remaining faces were auto-assigned with Wall BC. For the flow analysis, the computational domain was discretised using a mesh which was automatically generated and optimised for providing accuracy. The results of simulations were post-processed and visualised using the COMSOL Multiphysics postprocessor.

In this work, seven chamber designs, a focus flow chamber design and a design with three inlets and outlets were investigated. The oval-shaped chamber possessed the best velocity profile, making it a good overall choice for the microfluidics. However, the commonly used rectangular shape had the lowest pumping power requirement of 97.31 nW and the lowest pressure of 1.2978 Pa. The hexagonal shape demonstrated the highest value of shear rate at 15.349 1/s out of all designs. The focus flow chamber design showed a good scaling of the results that were obtained by the oval chamber. Yet, the middle chamber had the most homogenous flow out of three. The best velocity profile was attributed to the three inlets design at the cost of 283.94 nW, which is almost three times more than the rectangular chamber. 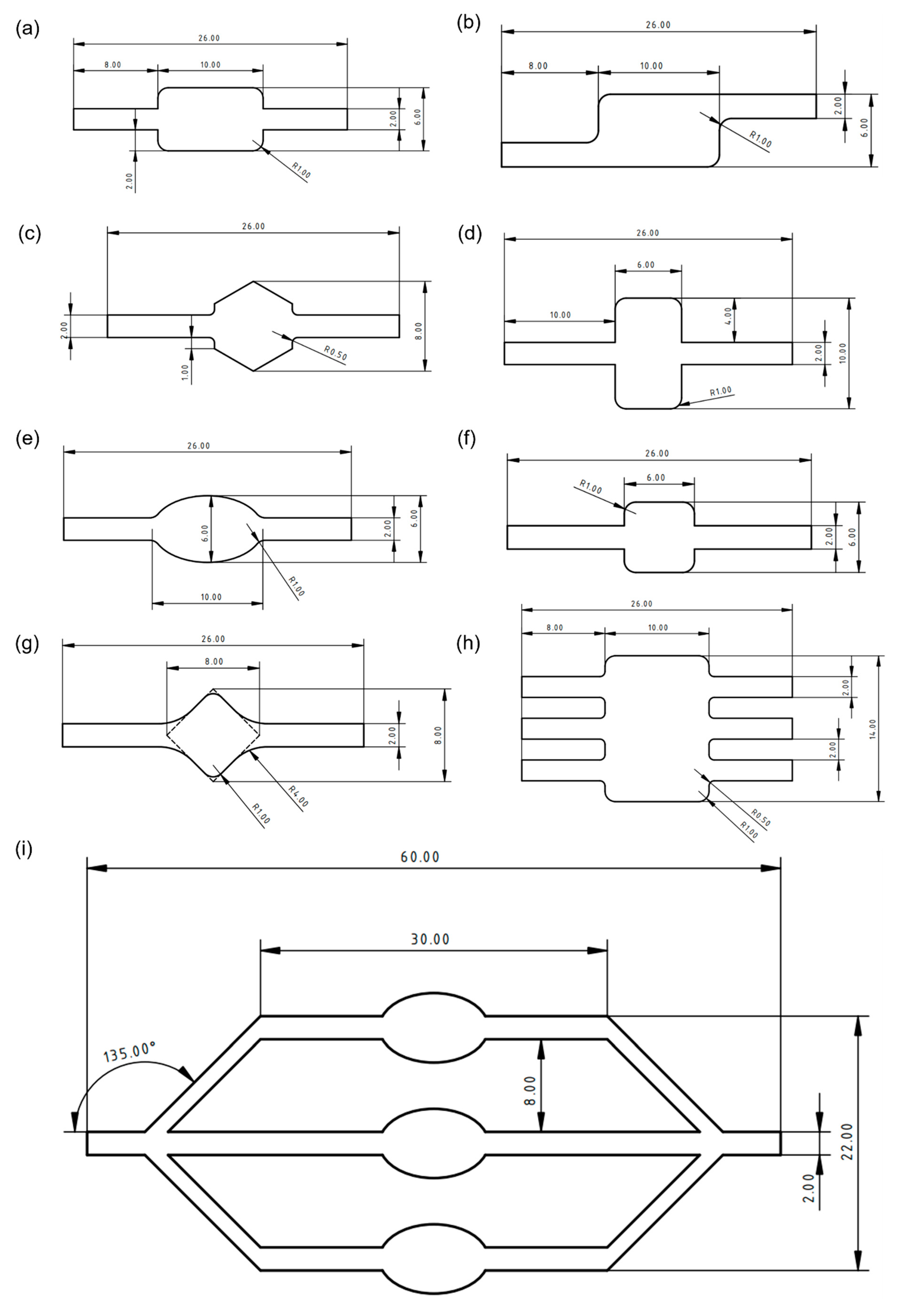 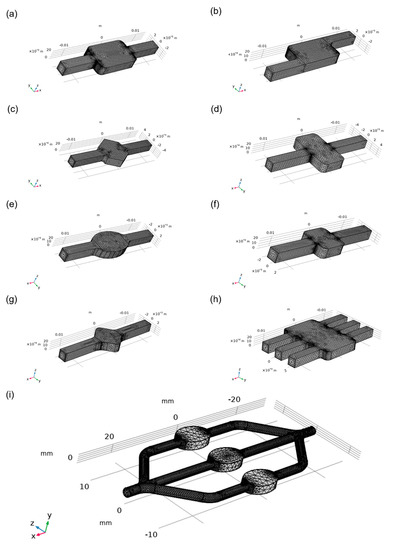 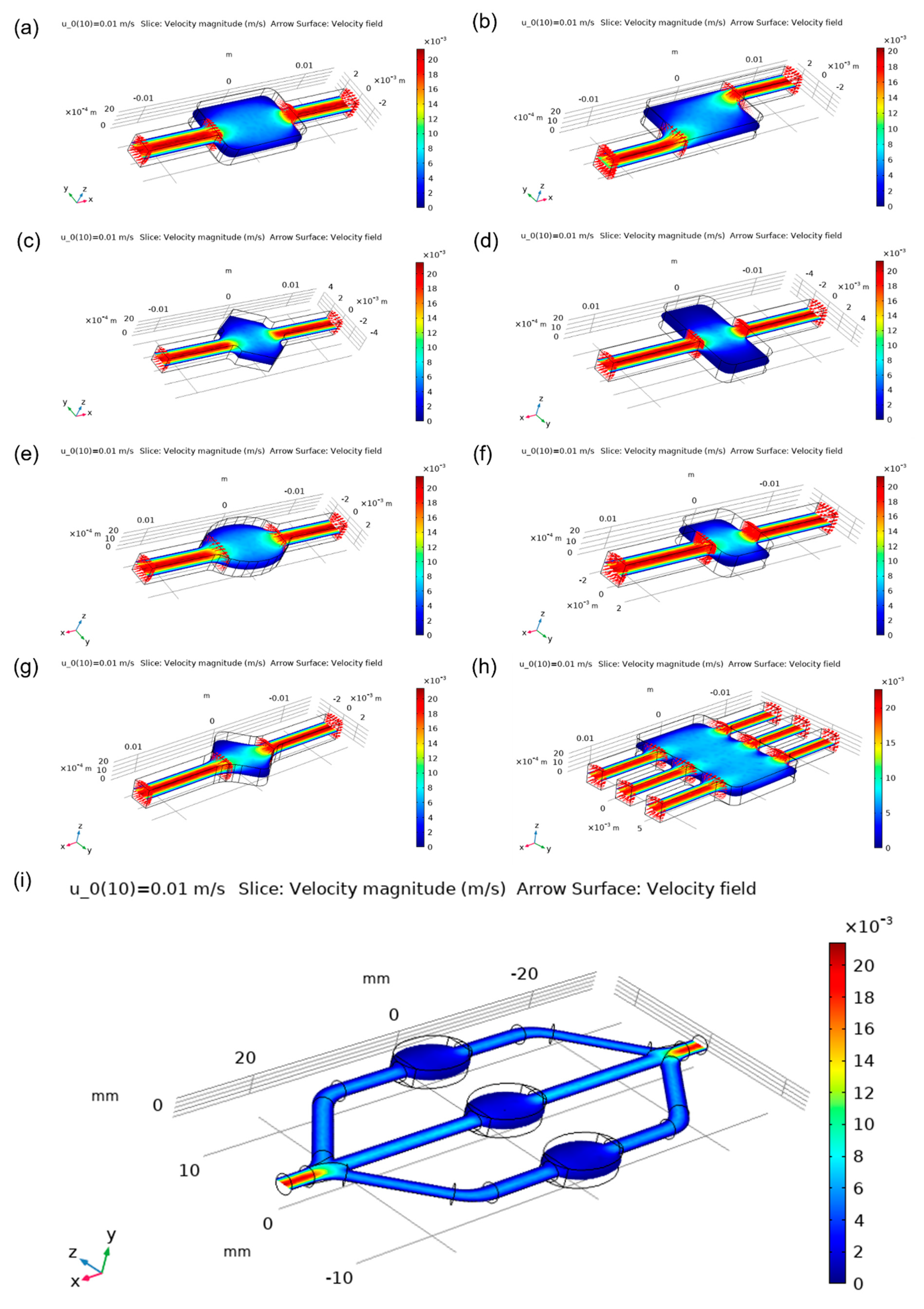 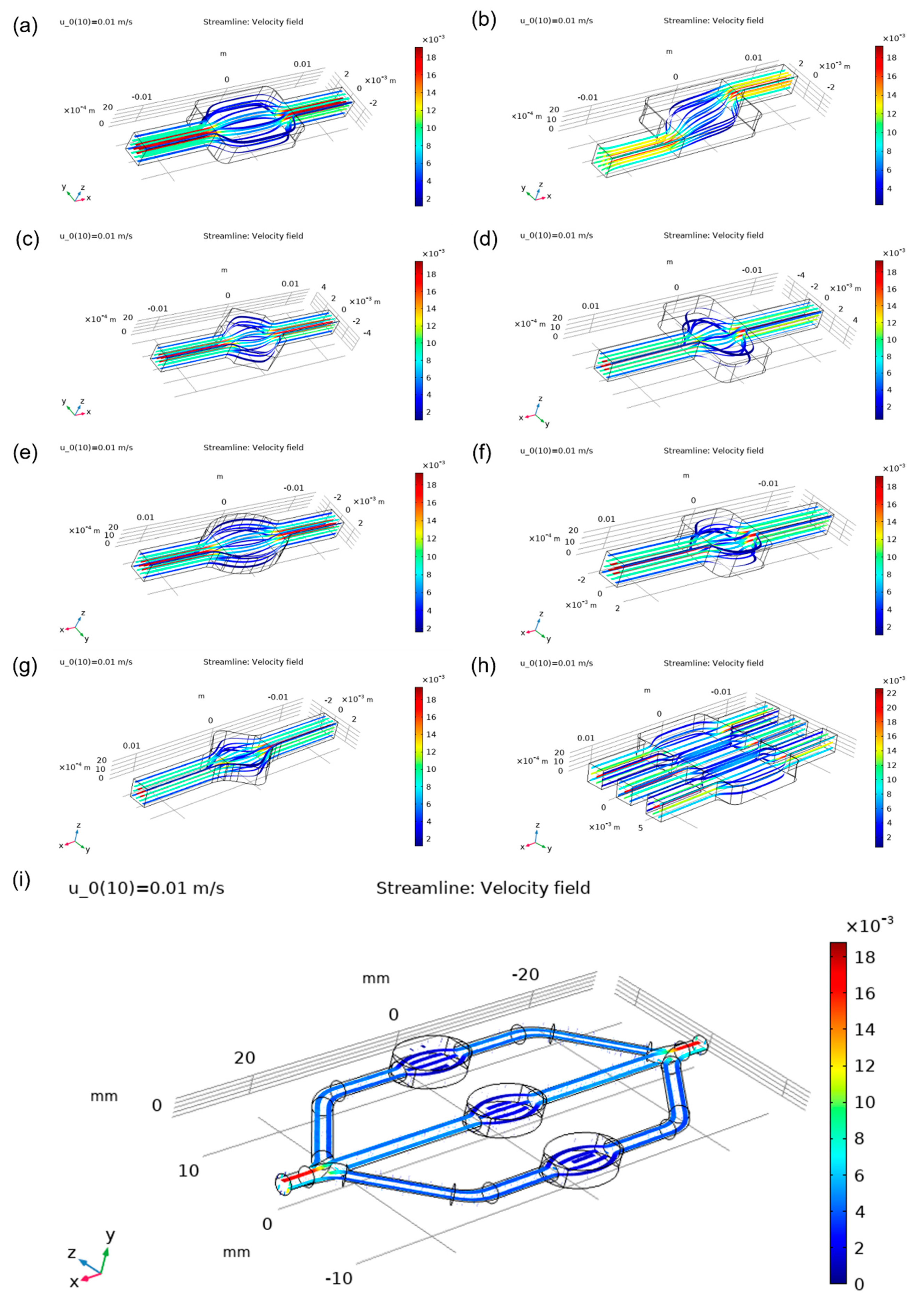 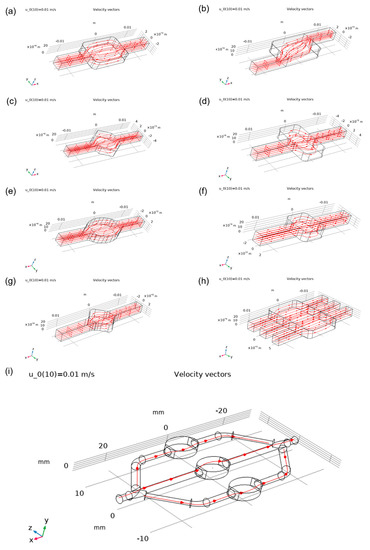 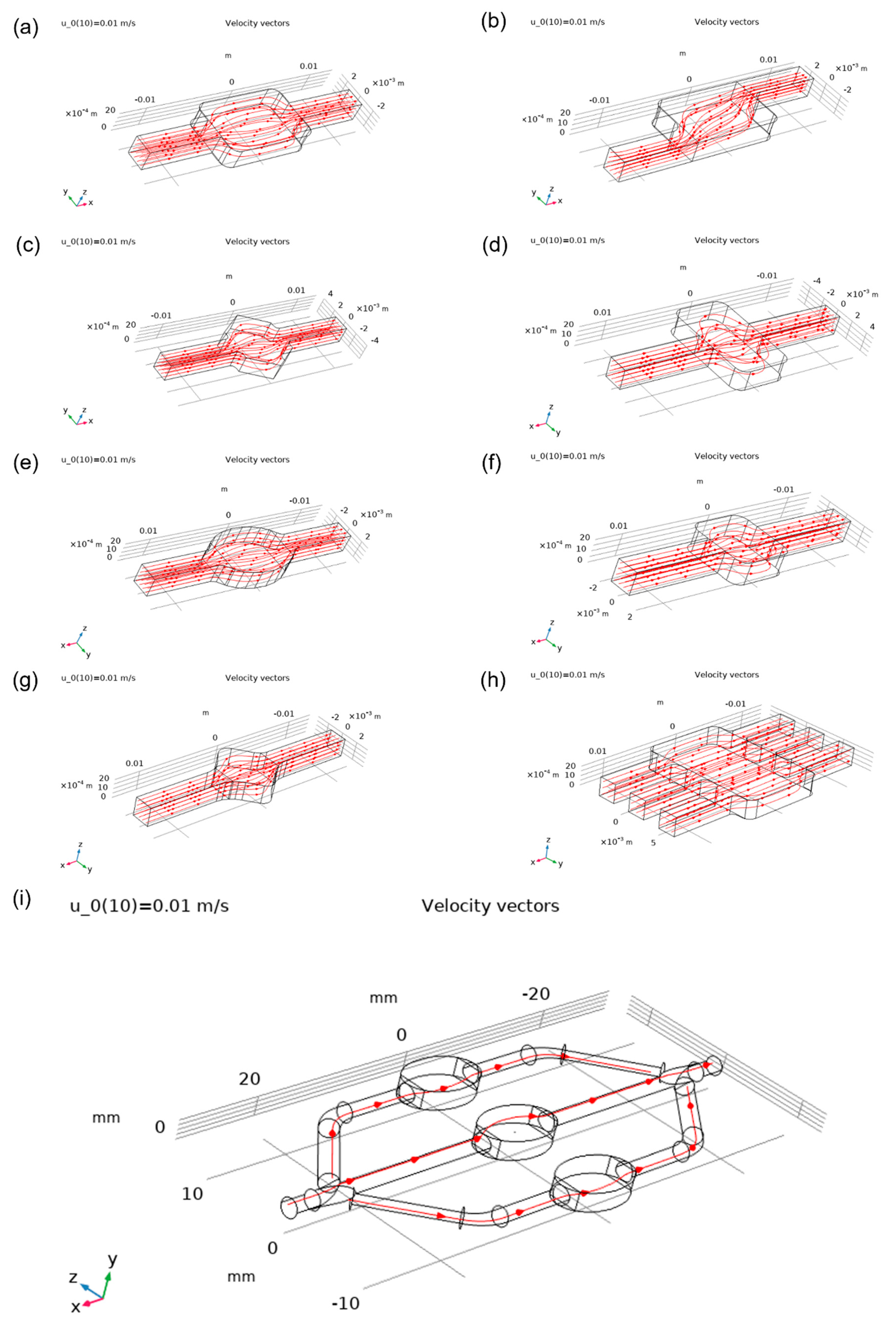 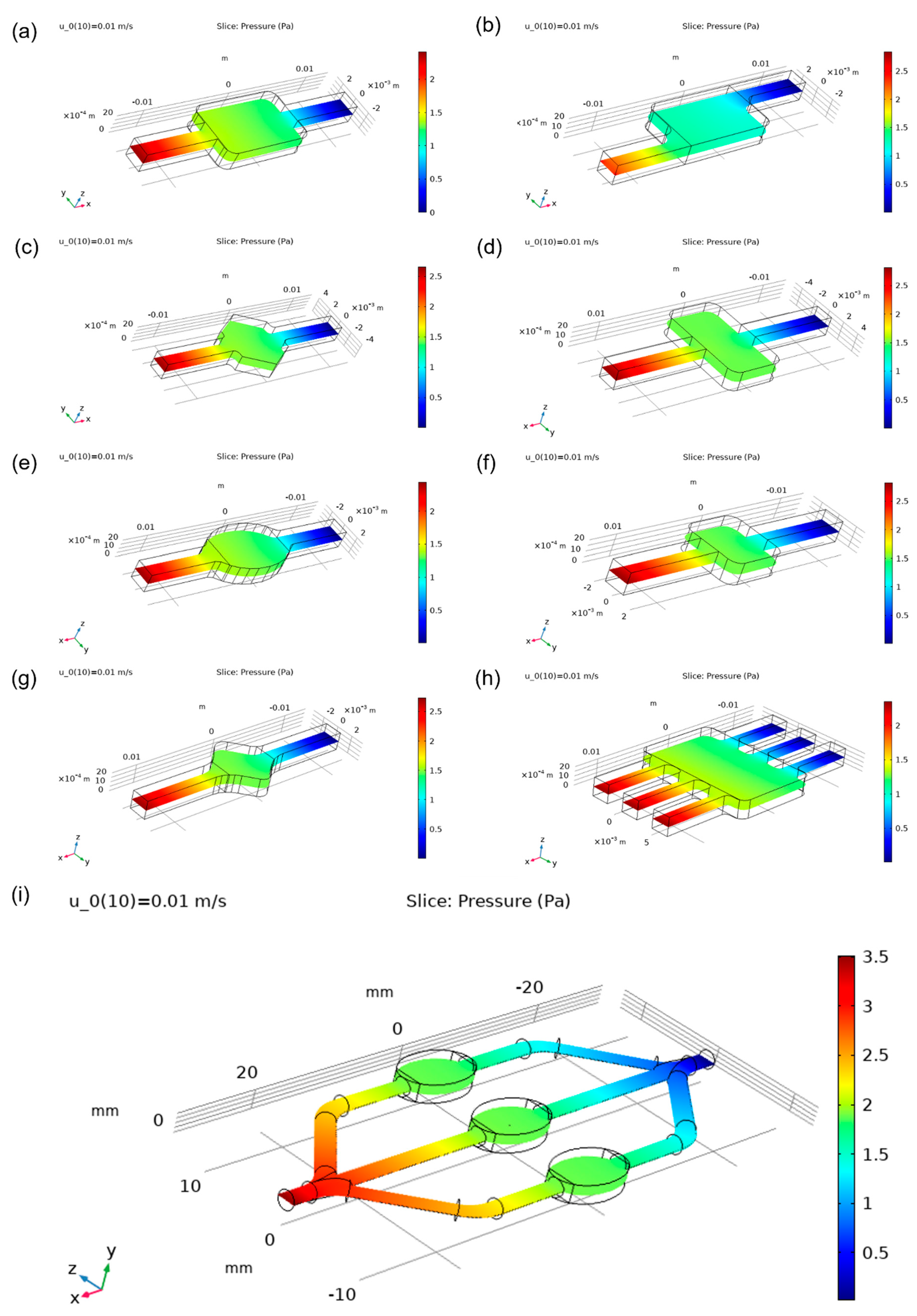 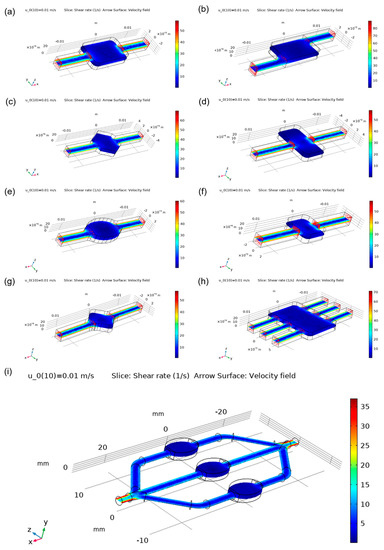 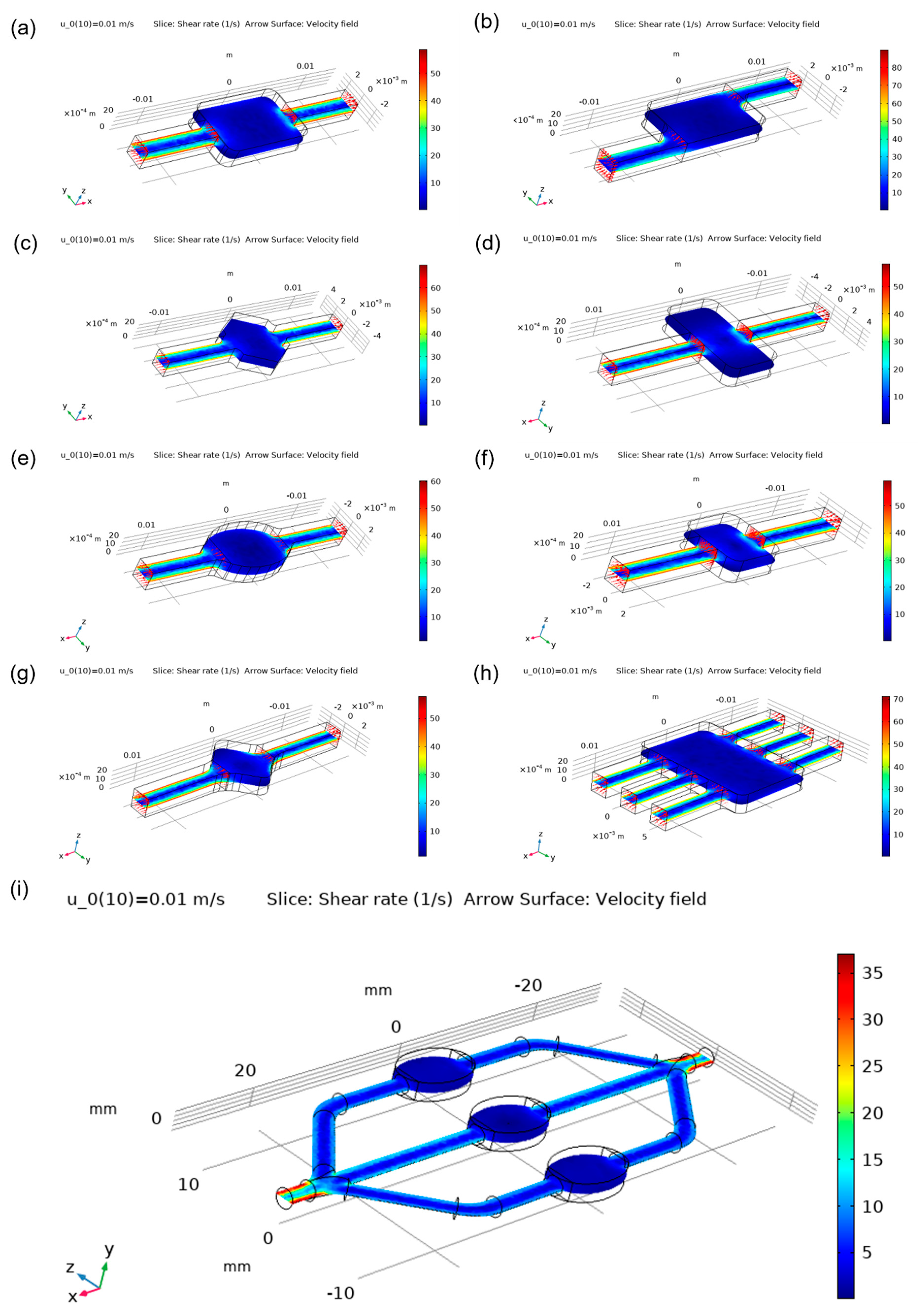 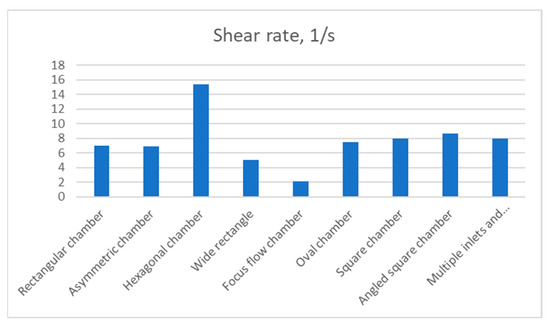 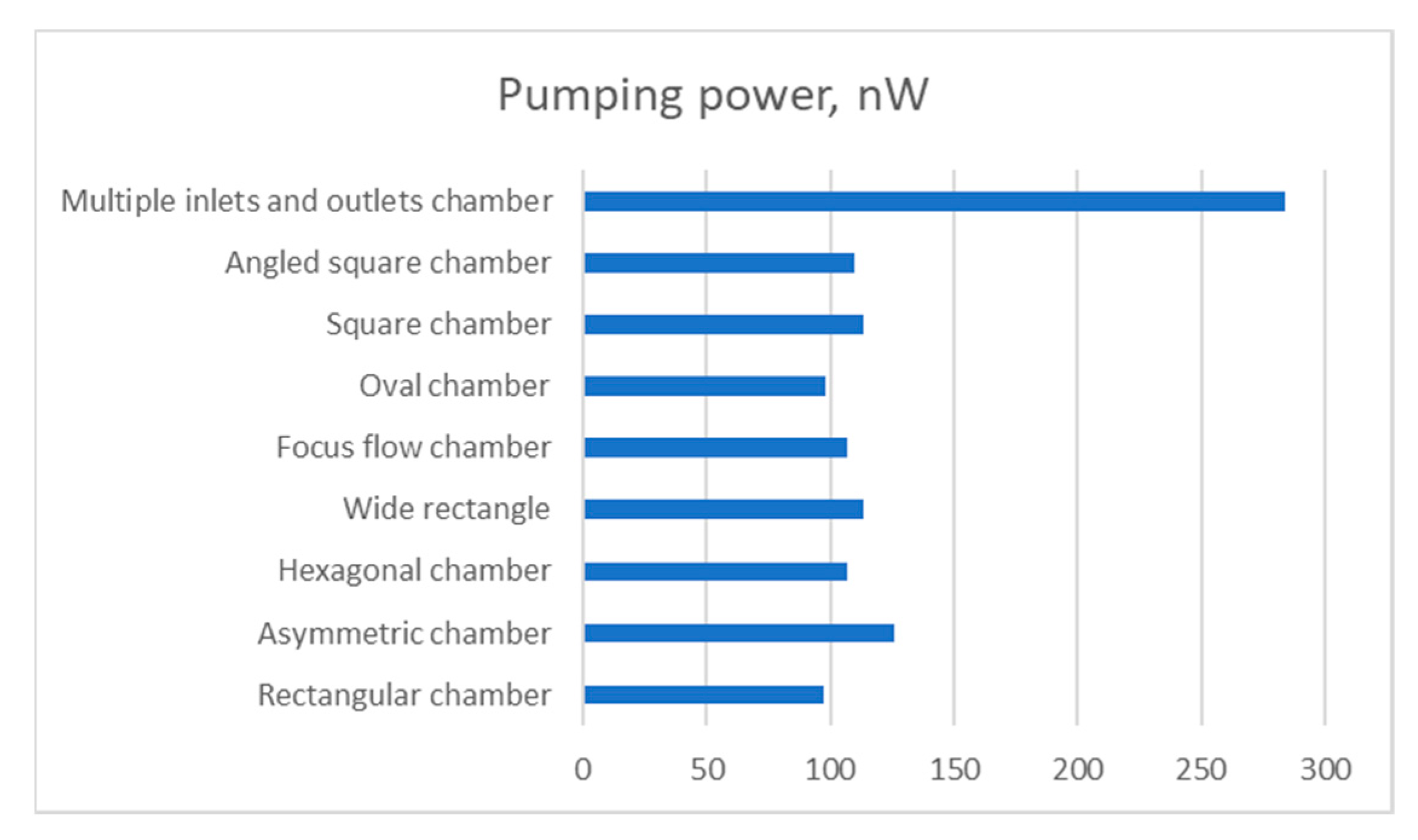 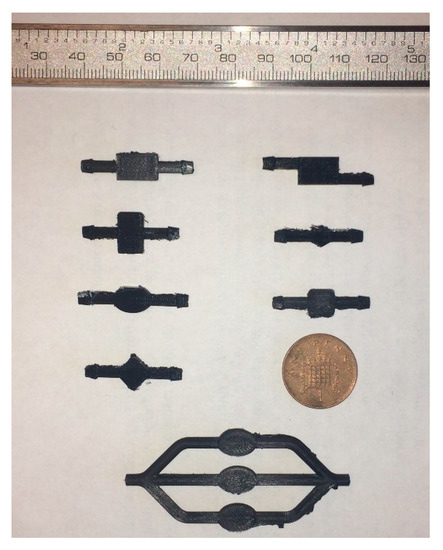 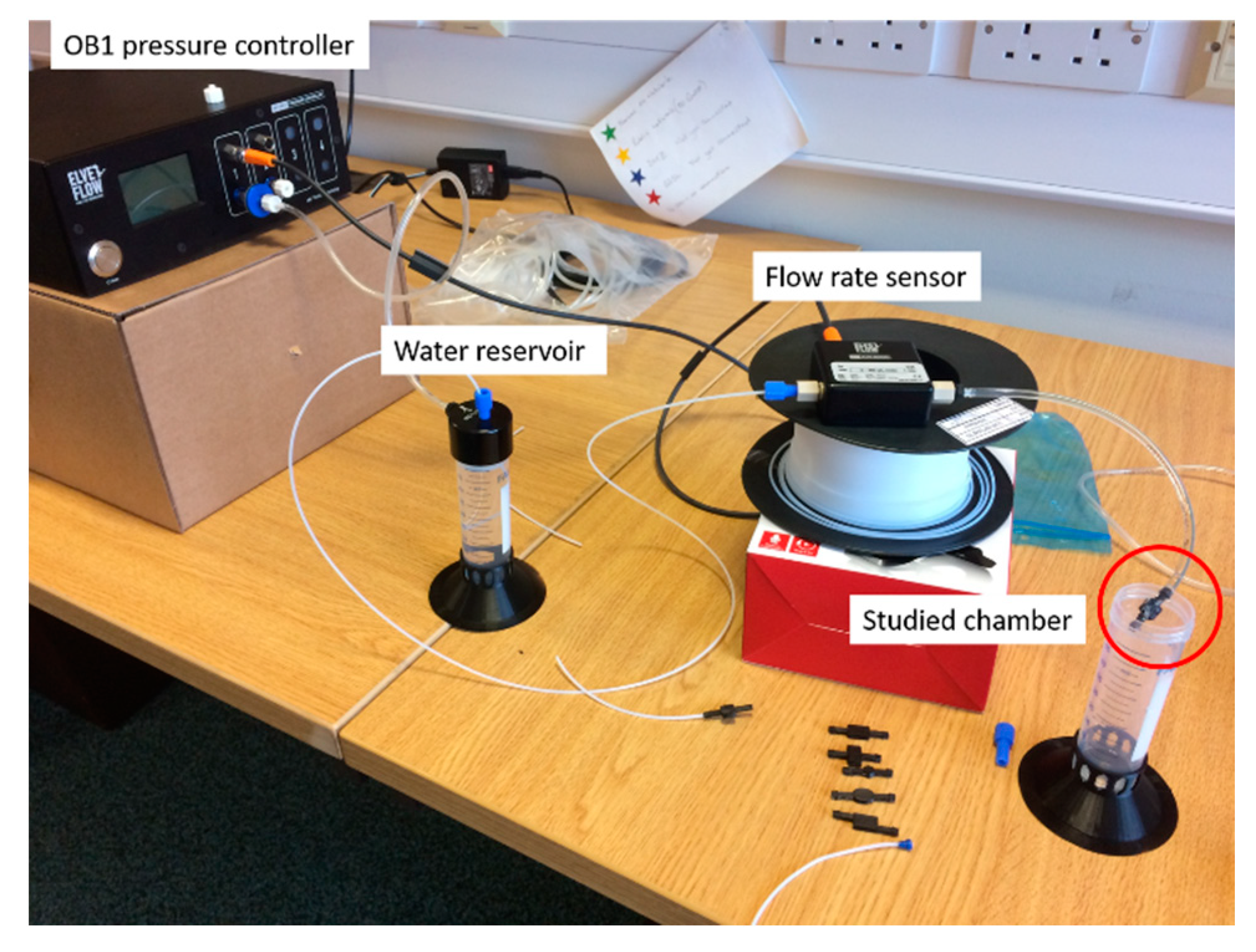 Table 1. Simulation results.
Table 1. Simulation results.
© 2022 by the authors. Licensee MDPI, Basel, Switzerland. This article is an open access article distributed under the terms and conditions of the Creative Commons Attribution (CC BY) license (https://creativecommons.org/licenses/by/4.0/).
We use cookies on our website to ensure you get the best experience. Read more about our cookies here.
Accept
We have just recently launched a new version of our website. Help us to further improve by taking part in this short 5 minute survey here. here.
Never show this again