A novel Pd/templated carbon catalyst (Pd/TC) was developed, characterized, and tested in the dehydrogenation of formic acid (FA) under mild conditions, with the possibility to control the H2 generation rate, in the absence or presence of HCOONa (SF), by adjusting the Pd:FA and/or FA:SF ratios. The characterization results of the templated carbon obtained by the chemical vapor deposition of acetylene on NaY zeolite revealed different structural and morphological properties compared to other C-based supports. Therefore, it was expected to induce a different catalytic behavior for the Pd/TC catalyst. Indeed, the TC-supported Pd catalyst exhibited superior activity in the decomposition of FA, even at room temperature, with turnover frequencies (TOFs) of up to 143.7 and 218.8 h−1 at 60 °C. The H2 generation rate increased with an increasing temperature, while the H2 yield increased with a decreasing FA concentration. Constant generation of gaseous flow (H2 + CO2) was achieved for 11 days, by the complete dehydrogenation of FA at room temperature using a 2 M FA solution and Pd:FA = 1:2100. The presence of SF in the reaction medium significantly enhanced the H2 generation rate (535 h−1 for FA:SF = 3:1 and 60 °C). View Full-Text
Keywords: catalytic formic acid dehydrogenation; hydrogen storage; hydrogen liquid carrier; Pd/templated carbon catalyst catalytic formic acid dehydrogenation; hydrogen storage; hydrogen liquid carrier; Pd/templated carbon catalyst
►▼ Show Figures 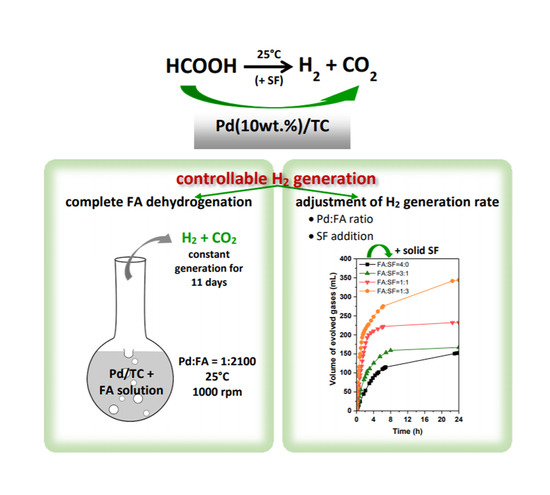