The Electromagnetic Will
Previous Article in Special Issue

Fluoroquinolones-Associated Disability: It Is Not All in Your Head

Cerebral ischemia represents the third cause of death and the first cause of disability in adults. This process results from decreasing cerebral blood flow levels as a result of the occlusion of a major cerebral artery. This restriction in blood supply generates low levels of oxygen and glucose, which leads to a decrease in the energy metabolism of the cell, producing inflammation, and finally, neurological deterioration. Currently, blood restoration of flow is the only effective approach as a therapy in terms of ischemic stroke. However, a significant number of patients still have a poor prognosis, probably owing to the increase in the generation of reactive oxygen species (ROS) during the reperfusion of damaged tissue. Oxidative stress and inflammation can be avoided by modulating mitochondrial function and have been identified as potential targets for the treatment of cerebral ischemia. In recent years, the beneficial actions of flavonoids and polyphenols against cerebrovascular diseases have been extensively investigated. The use of resveratrol (RSV) has been shown to markedly decrease brain damage caused by ischemia in numerous studies. According to in vitro and in vivo experiments, there is growing evidence that RSV is involved in several pathways, including cAMP/AMPK/SIRT1 regulation, JAK/ERK/STAT signaling pathway modulation, TLR4 signal transduction regulation, gut/brain axis modulation, GLUT3 up-regulation inhibition, neuronal autophagy activation, and de novo SUR1 expression inhibition. In this review, we summarize the recent outcomes based on the neuroprotective effect of RSV itself and RSV-loaded nanoparticles in vitro and in vivo models focusing on such mechanisms of action as well as describing the potential therapeutic strategies in which RSV plays an active role in cases of ischemic brain injury. View Full-Text
Keywords: blood–brain barrier; brain; ischemia; neuroprotection; oxidative stress; polyphenols; reperfusion; resveratrol; therapy blood–brain barrier; brain; ischemia; neuroprotection; oxidative stress; polyphenols; reperfusion; resveratrol; therapy
►▼ Show Figures 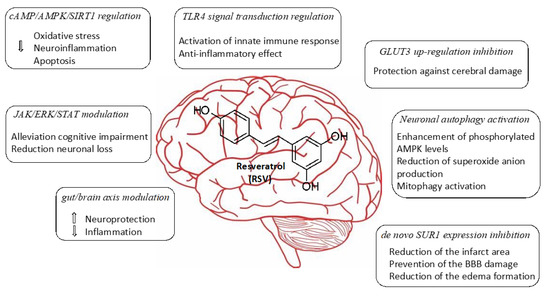