Post-Mortem 7.0-Tesla Magnetic Resonance Imaging of the Hippocampus in Progressive Supranuclear Palsy with and without Cerebral Amyloid Angiopathy

The main goal of this review is to summarize and discuss (1) age-dependent structural reorganization of mammalian visual cortical circuits underlying complex visual behavior functions in primary visual cortex (V1) and multiple extrastriate visual areas, and (2) current evidence supporting the notion of compensatory mechanisms in aged visual circuits as well as the use of rehabilitative therapy for the recovery of neural plasticity in normal and diseased aging visual circuit mechanisms in different species. It is well known that aging significantly modulates both the structural and physiological properties of visual cortical neurons in V1 and other visual cortical areas in various species. Compensatory aged neural mechanisms correlate with the complexity of visual functions; however, they do not always result in major circuit alterations resulting in age-dependent decline in performance of a visual task or neurodegenerative disorders. Computational load and neural processing gradually increase with age, and the complexity of compensatory mechanisms correlates with the intricacy of higher form visual perceptions that are more evident in higher-order visual areas. It is particularly interesting to note that the visual perceptual processing of certain visual behavior functions does not change with age. This review aims to comprehensively discuss the effect of normal aging on neuroanatomical alterations that underlie critical visual functions and more importantly to highlight differences between compensatory mechanisms in aged neural circuits and neural processes related to visual disorders. This type of approach will further enhance our understanding of inter-areal and cortico-cortical connectivity of visual circuits in normal aging and identify major circuit alterations that occur in different visual deficits, thus facilitating the design and evaluation of potential rehabilitation therapies as well as the assessment of the extent of their rejuvenation. View Full-Text
Keywords: aging; brain; circuit; visual; perception; monkey; human aging; brain; circuit; visual; perception; monkey; human
►▼ Show Figures 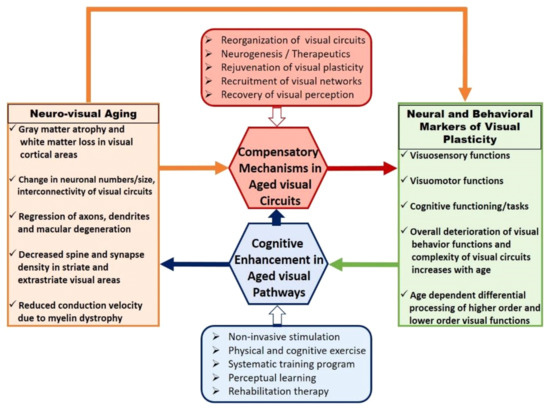