Coumarin 153 Dynamics in Ethylammonium Nitrate: The Effects of Dilution with Methanol
Previous Article in Journal

Hydrocarbon Compatible SOFC Anode Catalysts and Their Syntheses: A Review

Solid–liquid extractions were carried out in the dark in a Carousel 12 Plus Reaction Station from Radleys Tech (Germany) that is able to both stir and maintain temperature within ±1 °C. In all experiments, the temperature was kept constant at 25 °C and stirring at 600 rpm. At least three individual samples were prepared and quantified, allowing the determination of the average extraction yield and respective standard deviation. All aqueous solutions were prepared gravimetrically within ±10−4 g. Mixtures of spinach ground leaves and extraction solutions were prepared by weight taking into account the solid–liquid ratio. Several concentrations of IL in water, solid–liquid ratio and extraction time were optimized as described below.
After the extraction step, the aqueous solutions were separated from biomass by centrifugation (at 4000 rpm for 30 min using a centrifuge 5804, Eppendorf AG, Nussloch, Germany). The quantification of chlorophylls in each solution was carried out by UV-Vis spectroscopy by using a multi-mode microplate reader Synergy HT, BioTek Instruments (Lexington, MA, USA). Calibration curves were prepared using the commercial standards of chlorophylls a and b in IL aqueous solutions. OriginPro 8.0 was used for the spectral deconvolution of peaks at 649 and 665 nm that correspond to the maximum absorption wavelengths of chlorophylls b and a, respectively. Absorbance was recorded in duplicate for each sample. The amount of chlorophylls a and b in spinach leaves was calculated according to the weight of chlorophylls (a or b) present in the extract divided by the weight of dried biomass used. Selectivity was calculated as the ratio between the content of chlorophyll a and the content of chlorophyll b in each sample.

Surface response methodology was applied to simultaneously analyze various operating conditions and allow the identification of the most significant parameters that enhance the chlorophylls’ extraction yield. In a 2k surface response methodology, there are k factors that contribute to a different response, and the data are treated according to a second-order polynomial equation as follows: where is the response variable and , , and are the adjusted coefficients for the intercept, linear, quadratic and interaction terms, respectively, and and are independent variables. This model allows drawing surface response curves, and by using analysis, the optimal conditions can be determined. Based on the results obtained in the initial screening with several IL, [C16py]Cl IL was selected to perform a 22 factorial planning, with the aim of optimizing the extractive process of chlorophylls from spinach leaves, i.e., the concentration of IL and solid–liquid ratio. A 22 factorial planning has been defined by the central point (zero level), the factorial points (1 and −1, level one) and the axial points (level α)—see Table S1 in the Supplementary Materials. The independent variables coded levels used in factorial planning are presented in Table S2 in Supplementary Materials. The axial points are encoded at a distance α from the central point, as described by Equation (2).
For comparison purposes, a 22 factorial planning was performed with ethanol (Supplementary Materials, provided in Table S3). The obtained results were statistically analyzed with a confidence level of 95%. Student’s t-test was used to check the statistical significance of adjusted data. The adequacy of the model was determined by evaluating the lack of fit, the regression coefficient (R2) and the F-value obtained from the analysis of variance (ANOVA) that was generated. Statsoft Statistica 10.0© software was used for all statistical analyses and for representing response surfaces.

3.1. Screening of the IL Chemical Structure to Efficiently Extract Chlorophylls from Spinach Leaves

A first screening on aqueous solutions of ILs with hydrotrope or surface-active behavior was carried out in order to evaluate the most promising IL for the extraction of chlorophylls. The same operating conditions were kept in all experiments, namely the IL concentration at 10 wt.%, a spinach-solvent weight fraction ratio of 1:50 (solid–liquid ratio (R) = 0.02) and an extraction time of 30 min at 25 °C. The effect of different ILs on the extraction yield of chlorophylls (ratio between the weight of each extracted chlorophyll and the weight of dried biomass) and selectivity towards chlorophyll a (given by the chlorophylls a/b ratio) is presented in Figure 3, providing as well the same parameters for pure water as solvent
Although the amount of extracted chlorophylls depends on IL chemical structure (anion and cation), in general, surface-active ILs perform better in the extraction of chlorophylls than ILs with hydrotropic characteristics. More specifically, aqueous solutions of most ILs with hydrotrope behavior ([N1111]Cl, [N2222]Cl, [N3333]Cl, [N4444]Cl, [Gdm]Cl, [C4mim]Cl, [C4mim][CF3SO3] and [P4444]Cl) present poor extraction performance, with extractions similar or even worse than pure water (Figure 2). In fact, most of these IL aqueous solutions result in a negligible extraction yield (below the quantification limit). Therefore, hydrotropy is not a relevant main mechanism on promoting chlorophylls’ solubility in aqueous media and further extraction from biomass. On the other hand, extraction efficiency increases significantly with surface-active ILs, i.e., with ILs composed of long alkyl side chains that are able to form micelles in aqueous solutions [40]. The surface-active ILs here studied were [C14mim]Cl, [C16py]Cl, [C16py]Br, [P44414]Cl, [N16111]Br and [N14111]Br. Taking into consideration the critical micellar concentration (CMC) values for the surfactant ILs under study (cf. Table S4), it is possible to guarantee that the concentrations of all ILs are well above their CMC, thus allowing the formation of micelles and the incorporation of chlorophylls, which are hydrophobic compounds, in the ILs’ micelle core. The yields obtained with these ILs is significantly higher than those achieved with water or with aqueous solutions of hydrotrope ILs. Thus, the importance of the surface activity of the IL applied and micelles formation is evident when attempting chlorophyll extraction from spinach leaves. When using IL with surfactant characteristics, solubility and extraction yield enhancement occur due to IL self-aggregation and the possibility of incorporating hydrophobic solutes in the micelle core, being usually more pronounced at low concentrations of IL, close to CMC. This behavior is in agreement with that observed by Faria et al. [35] and Martins et al. [38] in the extraction of triterpenic acids from apples and chlorophyll a from Spirulina maxima, respectively.
In order to evaluate extraction selectivity, the ratio between chlorophyll a and chlorophyll b is also shown in Figure 3. Taking into account that the ratio of chlorophyll a and b in plants is around 3:1, the extraction process is selective if the calculated ratio is higher than 3. The results obtained reveal that ILs [C16py]Cl and [C16py]Br are able to isolate higher amounts of chlorophyll a, where ratios of 3.31 and 3.22, respectively, were achieved. Compared with pure water, where this ratio is 1.77, it is possible to conclude that the addition of IL is advantageous in terms of selectivity towards chlorophyll a.
Overall, ILs [P44414]Cl, [C16py]Br and [C16py]Cl are the most promising ILs for the extraction of chlorophylls from spinach leaves. Despite the results obtained with [P44414]Cl, they are slightly better than those obtained with [C16py]Cl, and the latter presents a higher selectivity value; as such, it was chosen for optimizing the operating conditions to improve extraction process performance. Although IL [N44414]Br was efficient in the extraction of chlorophyll a from Spirulina, resulting in an increased yield of 25% compared to conventional methodology [38], in our work pyridinium-based and phosphonium-based ILs promoted better yields in the extraction of chlorophylls from spinach leaves, revealing that IL performance largely depends on biomass nature.

3.2. Optimization of the Operating Conditions by Response Surface Methodology

After demonstrating that aqueous solutions of surface-active ILs are promising solvents for extracting chlorophylls from biomass, we further investigated their recovery while envisaging the reuse of the IL aqueous solution. The recovery of the chlorophylls was performed by back-extraction using a renewable solvent, namely ethyl acetate, that was placed in contact with the IL aqueous solution containing chlorophylls in a volume ratio of 1:1, as depicted in Figure 6. After chlorophyll liquid–liquid extraction, the concentration of chlorophyll a and b in the IL aqueous solution was reduced from 18.53 mg/L to 0.09 mg/L and 2.38 mg/L to 0.06 mg/L, respectively, allowing its reuse into a new cycle of extraction. We carried out three further cycles of extraction with the recovered IL under optimum extraction conditions ([C16py]Cl at 17.1 wt.%, solid–liquid ratio of 0.017, during 30 min at 25 °C), where the yields of extraction of chlorophyll a and b and chlorophyll ratio a/b were shown to be maintained. Furthermore, the possibility of reusing the solvent in new extraction cycles, as shown above, and the fact that the process employs an aqueous solution of IL instead of a pure organic solvent demonstrate the higher sustainable character of the developed process. Although it may raise the moderate toxicity of [C16py]Cl, which obviously depends on IL amount and organism or cell line being appraised, it should be mentioned that it is currently used in cosmetic products under European regulation [45]. Furthermore, this IL is applied in aqueous solution in a low content and is eliminated from the chlorophylls’ extract, as shown before, further permitting the recovery and reuse of the IL.
Figure 6 summarizes the selective chlorophyll extraction method developed using aqueous solutions of surface-active ILs, with the goal of recovering natural chlorophylls, mainly chlorophyll a, that may be employed (at a cheaper cost) in food, nutraceutical, cosmetic or pharmaceutical applications.

This study was developed within the scope of project CICECO-Aveiro Institute of Materials, UIDB/50011/2020 and UIDP/50011/2020, financed by national funds through FCT/MEC and, when appropriate, co-financed by FEDER under the PT2020 Partnership Agreement. This study was also financially supported by project POCI-01-0145-FEDER-030750 (PTDC/EQU-EPQ/30750/2017)—funded by FEDER, through COMPETE2020—Programa Operacional Competitividade e Internacionalização (POCI) and by national funds (OE), through FCT/MCTES. 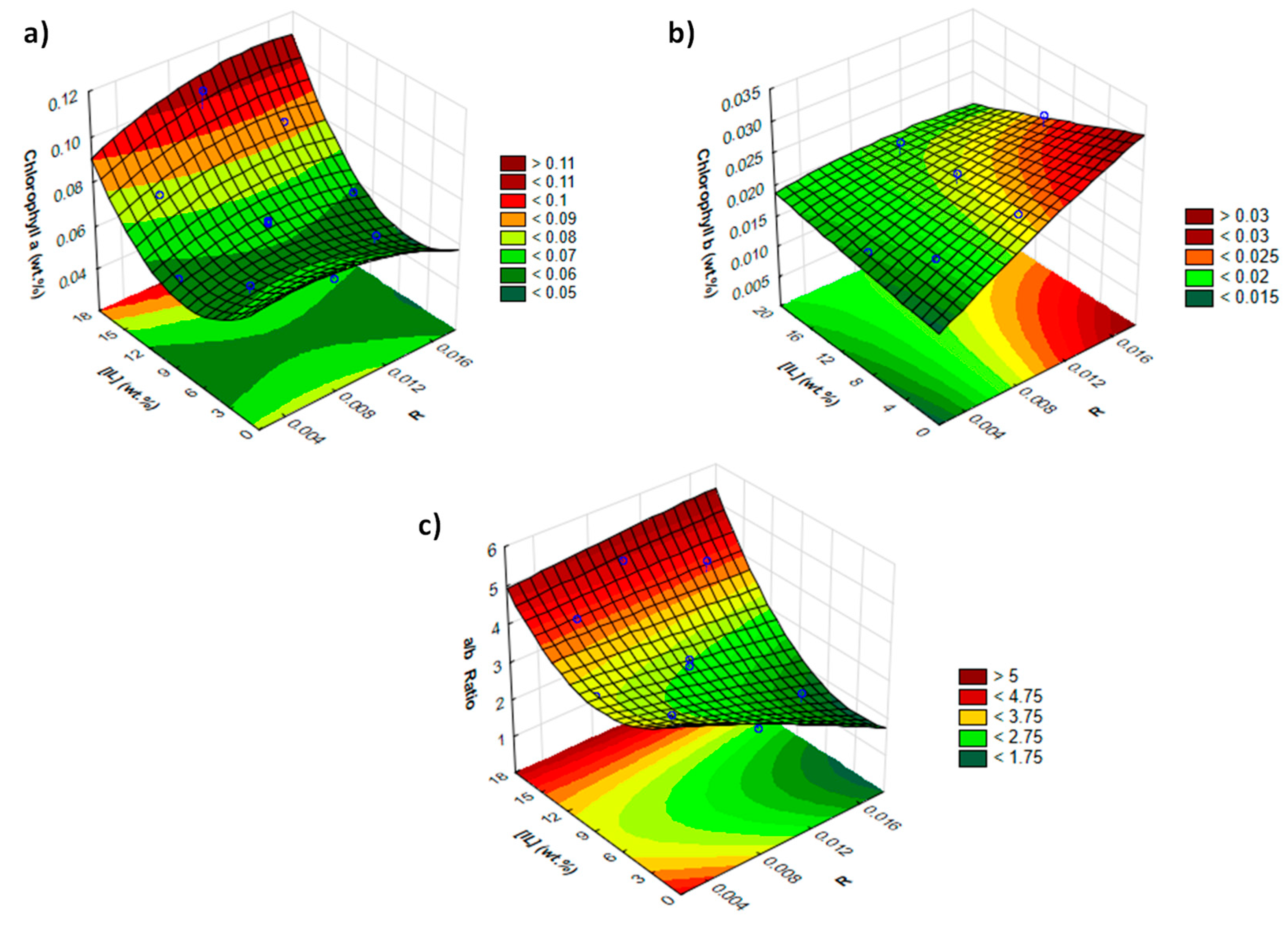 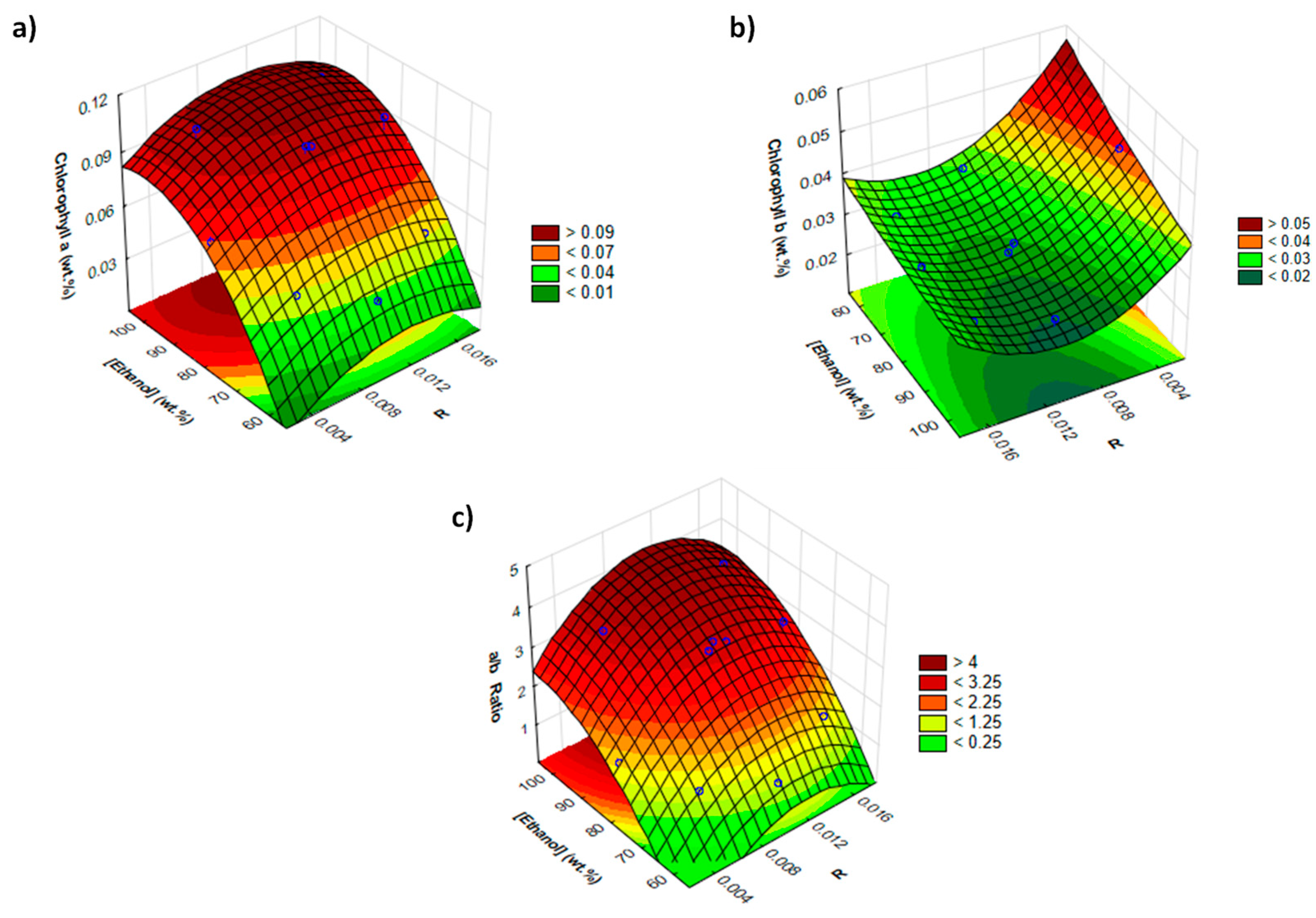