The regioselectivity in non-polar [3+2] cycloaddition (32CA) reactions has been studied within the Molecular Electron Density Theory (MEDT) at the B3LYP/6-311G(d,p) level. To this end, the 32CA reactions of nine simplest three-atom-components (TACs) with 2-methylpropene were selected. The electronic structure of the reagents has been characterized through the Electron Localisation Function (ELF) and the Conceptual DFT. The energy profiles of the two regioisomeric reaction paths and ELF topology of the transition state structures are studied to understand the origin of the regioselectivity in these 32CA reactions. This MEDT study permits to conclude that the least electronegative X1 end atom of these TACs controls the asynchronicity in the C−X (X=C, N, O) single bond formation, and consequently, the regioselectivity. This behaviour is a consequence of the fact that the creation of the non-bonding electron density required for the formation of the new single bonds has a lower energy demand at the least electronegative X1 atom than at the Z3 one. View Full-Text
Keywords: non-polar [3+2] cycloaddition reactions; regioselectivity; molecular electron density theory; electronegativity; molecular mechanism non-polar [3+2] cycloaddition reactions; regioselectivity; molecular electron density theory; electronegativity; molecular mechanism
►▼ Show Figures 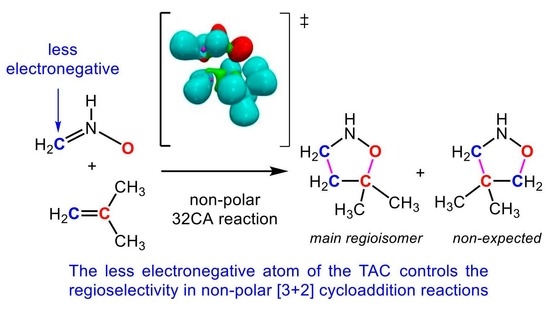