The vision of having a central, robust, and intelligent network management can be achieved by taking advantages of learning algorithms in the control layer of Software-Defined Network (SDN). The network virtualization concept is about separating services and infrastructures in order to achieve the provision and development of smooth service by using virtualized network software functions [1]. In the Network Functions Virtualization (NFV) framework, a group of functions and infrastructures (e.g., hardware resources) is formed with the aim of solving network challenges and providing services to cope with critical network situations [2].
The integration of SDN and NFV into an exclusive architecture is an opportunity to take advantage of SDN features, such as having a programmable, intelligent, and dynamic network controller and manager, along with providing efficient response to highly dynamic service demands, such as ultra-low latency, reliability, and more. Gomes et al. [3] proposed an architecture in this matter by combining SDN and network virtualization. In the proposed architecture, Internet Service Providers (ISPs) could tune resource allocation among different Virtual Software Defined Networks (VSDN) that are based on user’s demands.
Moreover, with the introduction of fifth Generation (5G) and beyond of mobile systems, it is expected that 5G will support various service requirements [4]. Indeed, with the widespread growth of mobile users and the emerging Internet of Things (IoT) in the near future, 5G is a promising way to connect massive smart devices in various IoT applications with diverse user expectations for quality of service. The 5G resources should be efficiently allocated in order to meet these expectations. On this point, the sharing of physical network resources with several virtual network slices that were isolated from each other was recently proposed as an approach to boosting 5G against various quality of service demands [4,5,6,7].
Regarding the network traffic states, which are defined as safe, warning, and congested in [8]; in the literature, the proposed methods of network congestion recognition are mainly based on the computation of the available and the needed resources. For example, the authors in [9,10,11] considered the Channel Busy Ratio (CBR) to find congestion in vehicular networks using the European Telecommunications Standards Institute (ETSI) standardization. Finding an optimal value for CBR that prevents communication channel from under-utilization is a serious challenge in these works. Whenever the amount of required network resources is higher than the amount of available resources, the network management system could find out that the smooth data flow may disappear and congestion could even occur. In highly dynamic network systems, like Heterogeneous Vehicular Networks (HetVNETs), the network’s topology, the number of users, the type of required services, and the amount of required resources are changing quickly and dynamically. Therefore, following constant and predefined policies for the current situation is not a promising way to provide reliable services. Because network conditions could change rapidly, applying prior generated policies and solutions is not applicable to network problems. In the light of this issue, it is worth giving dynamicity to the proposed solutions. In other words, if we have a very dynamic network, like HetVNET, then it may be a novel idea to propose a method that can provide network resources and requirements quickly and dynamically based on network templates. These templates can be used to dynamically create the HetVNET slices. Integrating Artificial Intelligence (AI) with SDN based architecture is a promising potential solution to the challenges of the dynamicity of heterogeneous networks [12]. To the best of our knowledge, in the current scientific works that are related to vehicular networks, there is a lack of an intelligent SDN-NFV based architecture that could provide network templates in HetVNET environment using computing power of fog objects. Indeed, the use of fog devices to implement intelligent methods (in the heart of SDN and NFV technologies) to ensure smooth data flow in vehicular networks is an open problem that needs to be addressed by both academic and industrial researchers [13,14].
With regard to the above-mentioned open problems and considering the role of 5G in building IoT use cases and the advantages of using SDN and NFV technologies, the following challenging research question that is related to the HetVNET environment may arise.
On the basis of the research question and the direct relation between the congestion problem and the resource allocation problem, we propose a novel method that is based on Deep Learning and network slicing technique with the aim of avoiding congestion in HetVNET. Therefore, considering network congestion problem in a high dynamic network environment, like HetVNET, taking advantage of global network view of the SDN, and using information from past successful network experiences, can help us to create an intelligent SDN architecture. In this paper, we apply the Conditional Generative Adversarial Network (CGAN) to:
CGAN is widely used for text, image, and video generation and prediction works. We will show how the proposed CGAN helps us to intelligently and reliably generate valuable information in order to create network slices with the aim of avoiding congestion in HetVNET. It is the first time that CGAN has been applied in this context to the best of our knowledge.

In this paper, the following five variables were considered: the number of vehicles (v), data rate (), DSRC transmission power (), LTE transmission power (), and LTE bandwidth (b). Based on the studied literature related to ETSI and the Wireless Access in Vehicular Environments (WAVE) standardization, these parameters have the most effect on network congestion problem [11,28,29,30,31,32,33]. Because no data sets from real HetVNET are available today, we have generated a data set that contains data records of these parameters [8]. We used OpenStreetMap (OSM) [34] to have a map that is similar to the real environment in terms of intersections, streets, buildings, etc. Figure 1 shows the boroughs of downtown Montreal that we used to generate the simulation scenario. Besides, to generate the road traffic and vehicle movements on the map, we used Simulation of Urban Mobility (SUMO) 0.26.0. [35]. SUMO requires “.osm” file created by OSM to generate the vehicle traffic on the map. Simultaneously, Veins LTE version 1.3 [36] simulator was used to generate heterogeneous vehicular network using IEEE 802.11p for V2V communications and LTE for Vehicle-to-Infrastructure (V2I) communications. SUMO and Veins LTE worked on Ubuntu 16.04. The simulation time was 1000 s and, in order to generate a high load of data, we defined a road accident with a 70 s time of running simulation scenario. Because we considered the downtown of Montreal city, the vehicles maintained the maximum speed limit of 40 km/h assigned to these boroughs. Table 1 shows the parameters and their corresponding values used for simulating HetVNET scenarios. In each run, the values of the five attributes were changed based on the information presented in Table 1.
Information was extracted after running simulation scenarios of HetVNET. The amount of network throughput over generated data rate can give us a vision of the network performance, as explained in [8]. Indeed, based on this value, we can find out how many of the generated data were successfully received at destination points per unit of time. Therefore, for each run of simulation scenario, the amount of network throughput over load per a unit of time is extracted. This value can be equal to one maximally in the desired case, and equal to zero minimally in the worst case of network performance. Network throughput is the calculated sum of the value of throughput in DSRC and the value of throughput in LTE. To meet the paper objectives, we used information of successful experiences (simulation runs). Simulation scenarios with a network throughput value over the generated data rate of more than 0.6 are selected as a successful scenario [37]. In fact, we need to extract the best scenarios in HetVNET and augment these successful scenarios. Subsequently, we put the information of these scenarios in the dataset. As shown in Figure 2, the data records in the dataset are classified based on the number of vehicles. Based on the five vehicle densities considered, there are five different classes of vehicles in this paper: 30, 50, 100, 150, and 200 vehicles.

When considering the dynamic nature of HetVNET, the HetVNET slices must be rapidly generated and modified. Besides, the slices must be provided in accordance with the user requirements. In this paper, we proposed an intelligent hybrid CGAN-SDN architecture for network slicing, while considering the network congestion problem in HetVNET. We proposed a CGAN based method for augmenting the data used in dynamically creating HetVNET slices. In this method, information on a number of network metrics, which have a significant impact on the smooth flow of data, has been extracted from network scenarios with a good performance and results, in terms of ratio of throughput to data generation rate. Subsequently, these data records are classified based on various vehicle densities, and the proposed CGAN method is applied to generate similar information. The augmented information can be used in the control layer of the proposed intelligent hybrid CGAN-SDN architecture to dynamically generate HetVNET slices. We evaluated the performance of the CGAN method and, based on the obtained results and discussions, the proposed CGAN method is a reliable way to generate data that are similar to the real data.
In the future, we will apply a reinforcement learning method to propose an agent in a hybrid SDN-based architecture, which can intelligently produce network slices.

Conceptualization, methodology and analysis, F.F. and S.P.; writing—original draft preparation, F.F.; writing—review and editing, S.P. and S.C.; supervision, S.P. and S.C. All authors have read and agreed to the published version of the manuscript.

Data available on request. Besides, the OSM data is available under the Open Database License at https://www.openstreetmap.org/copyright. 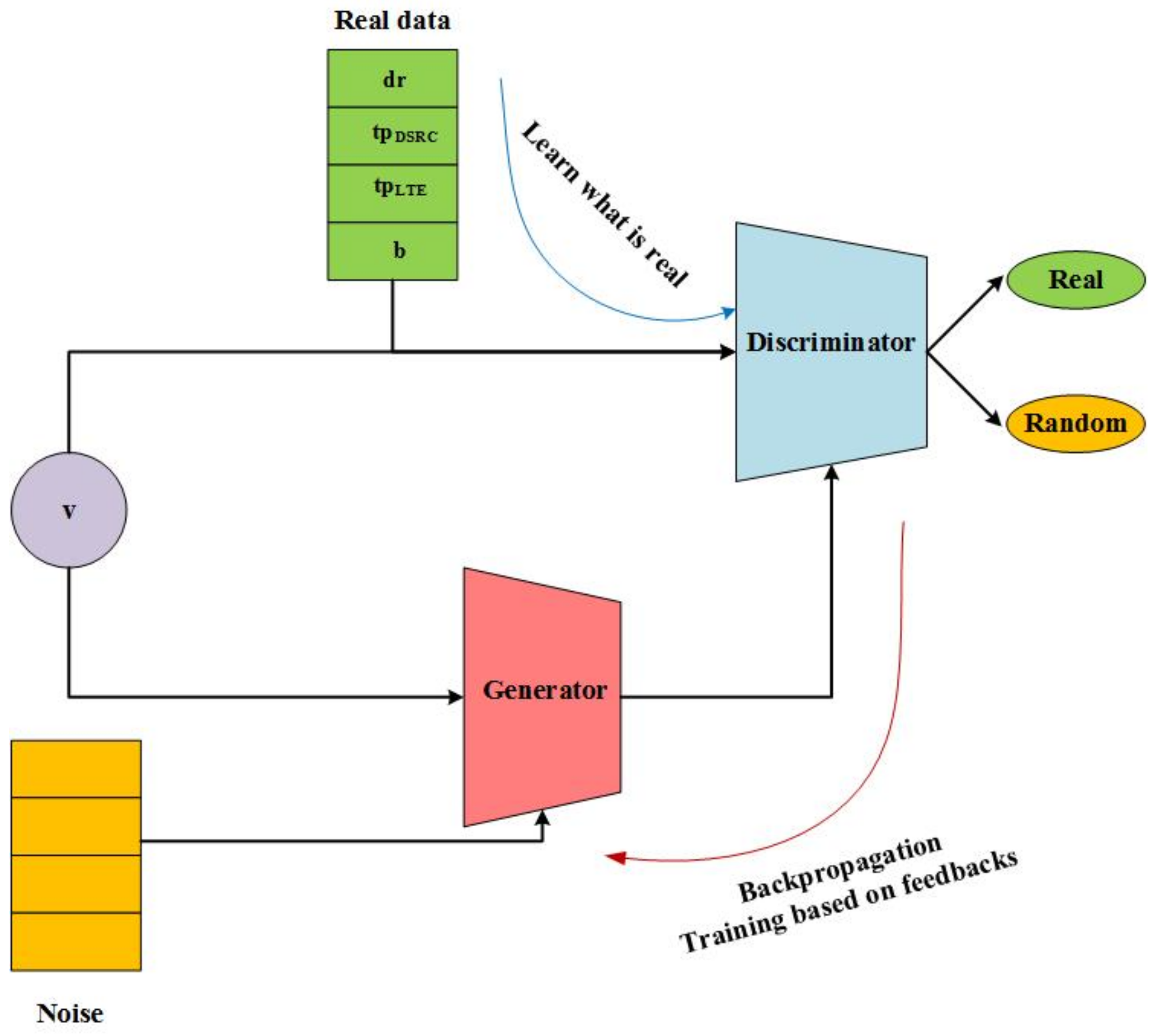 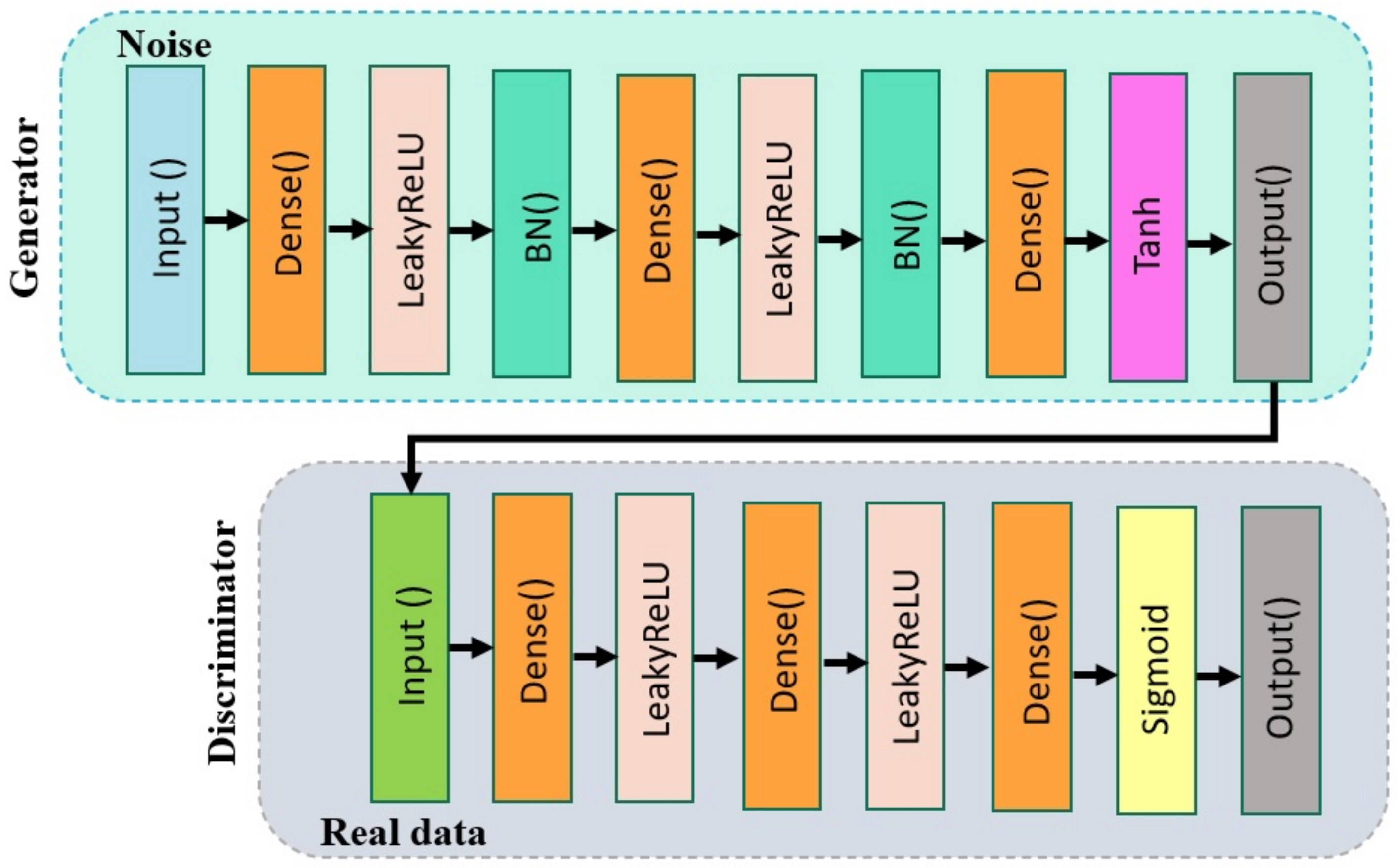 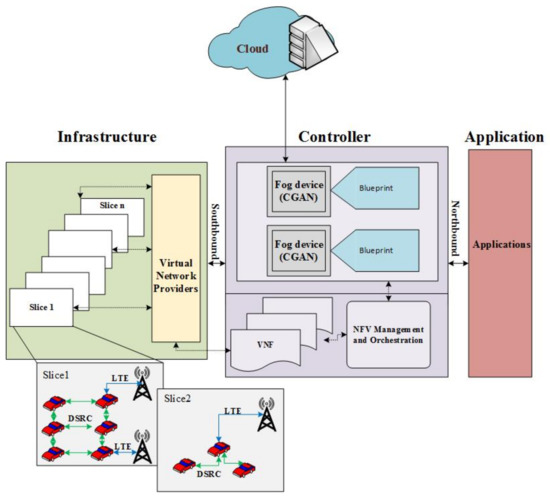 Table 1. Simulation parameters and corresponding values.
Table 1. Simulation parameters and corresponding values.
© 2021 by the authors. Licensee MDPI, Basel, Switzerland. This article is an open access article distributed under the terms and conditions of the Creative Commons Attribution (CC BY) license (http://creativecommons.org/licenses/by/4.0/).
We use cookies on our website to ensure you get the best experience. Read more about our cookies here.
Accept
We have just recently launched a new version of our website. Help us to further improve by taking part in this short 5 minute survey here. here.
Never show this again