Mesoporous alumina-based adsorbents consisting of a π-electron acceptor complexing agent (2,7-dinitro-9-fluorenone) were synthesized and characterized. Adsorbents were screened for the removal of sulfur compounds from a model ultra-low-sulfur diesel fuel via a charge transfer complex (CTC) mechanism. The sulfur adsorption isotherms and kinetics were examined. The kinetics of sulfur adsorption followed a pseudo-second-order model with the CTC adsorbents. Among the three adsorbents screened, a commercial γ-Al2O3 CTC adsorbent showed the highest desulfurization in a short-run period. The regeneration of spent adsorbent was studied with three different polar solvents, namely chloroform, dichloromethane, and carbon tetrachloride. Dichloromethane was found to be the most suitable solvent for extracting a major portion of sulfur compounds occupied in the pores of the spent adsorbent. γ-Al2O3 CTC adsorbent can be reused after regeneration. Thermodynamic parameters such as Ea, ΔG, ΔH, and ΔS provided a better insight into the adsorption process. View Full-Text
Keywords: mesoporous adsorbent; desulfurization; charge transfer complex; adsorption; kinetics and thermodynamics mesoporous adsorbent; desulfurization; charge transfer complex; adsorption; kinetics and thermodynamics
►▼ Show Figures 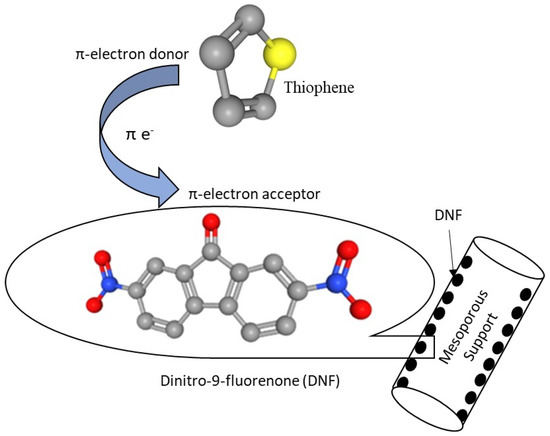