:
Controlling complex systems by traditional control systems can sometimes lead to sub-optimal results since mathematical models do often not completely describe physical processes. An alternative approach is the use of a neural network based control algorithm. Neural Networks can approximate any function and as such are able to control even the most complex system. One challenge of this approach is the necessity of a high speed training loop to facilitate enough training rounds in a reasonable time frame to generate a viable control network. This paper overcomes this problem by employing a second neural network to approximate the output of a relatively slow 3D-FE-Pultrusion-Model. This approximation is by orders of magnitude faster than the original model with only minor deviations from the original models behaviour. This new model is then employed in a training loop to successfully train a NEAT based genetic control algorithm.
Keywords:
neural network; Genetic Programming; Finite Element Modelling; pultrusion; reinforcement learning

Artificial Neural Networks (ANN) are increasingly used in a wide range of engineering applications [1,2,3,4,5,6,7]. ANN have proven their excellent pattern recognition capability [8], whether optical [9], acoustical [10] or in other multi-feature datasets [11]. Even though they require high computational power and large high-speed memory for effective training, as well as a lot of, often counter-intuitive, hyperparameters adjustments, they can fit any function if they have a reasonable network complexity. The classic use case as a high-level classification algorithm is but one of their many uses.
The still rapidly increasing computing power enables the use of ANN tremendously. ANNs are already present in smart phones and are considered capable of managing highly complex environments such as modern computer games [12] with their complex control schemes in real time. This capability opens up an extremely wide range of applications.
One application is the control of real engineering systems. The authors of [13] show that neural networks can be used to implement near-optimal control algorithms for difficult-to-control systems with constraints.
One approach for such a control model is the use of reinforcement learning with a genetic algorithm such as the NeuroEvolution of Augmenting Topologies (NEAT) algorithm [14]. The NEAT algorithm enables genetic evolution of a neural network to optimize the behavior for a given problem. The authors of [15] describe such an implementation for a nonholonomic wheeled robot.
This paper takes the same approach and describes the successful implementation of a two-step approach to generate a control neural network using the NEAT algorithm for a pultrusion system like the one displayed in Figure 1 and Figure 2.
The pultrusion system is represented by a Finite Element, short FE, model, but it is too slow to complete enough training rounds in a reasonable time. Therefor, an ANN is first trained to approximate the output of the FE model of a pultrusion process. This approximation deviates in accuracy and stability, but is significantly faster than the original model. The time gained by the increased speed is used to train a control algorithm based on NEAT. This evolutionary based algorithm benefits strongly from high-speed simulation due to its high parallelizability and the many training rounds required.
This is an alternative approach to the previously presented method [16], a more traditional control algorithm for a pultrusion based on data received on the resonant ultrasonic spectroscopy [17].

As Section 2 shows, a two-step approach can lead to a significant gain in computation time, which directly affects the training time of the control algorithm. While there is a difference in the real FE model and the fitted ANN, the difference is relatively insignificant with respect to the difference in the optimized control algorithm. To demonstrate the ability of the control ANN, the system is compared to the FE model. Figure 8 clearly shows that there is only a minor difference in behaviour for the control-ANN applied to the original FE-Model of around +1%. This is a systematic error in the control algorithm.
A fast and easy fix for this systematic error is a change in the target curing value which is fed to the model like, This small change nearly fully negates the systematic error and leads to a very good deviation of below for most curing targets as displayed in Figure 9.
The two-step approach of first training an ANN to approximate a FE model and then training a control algorithm on this much faster ANN model yields a significant speed advantage of several orders of magnitude. This approach can be applied to a variety of scientific problems. It works especially well for complex numerical or real world systems without a deterministic scientific model as long as a reasonable amount of training data is available.
The first part, in particular, is responsible for the high speed-up. The second part, i.e., the NEAT algorithm, is easily applicable to any problem where a clear evaluation and fitness function can be created. Especially the fitness function is crucial for a successful implementation. Local minima are particularly problematic, so a well-thought-out implementation is important. The algorithm will find and exploit any loopholes in the formulation. For example, an implementation such as for small values of n might lead to oscillation since it might be more valuable to obtain a few values extremely close to the , rather than a large number of values slightly further from .

This paper shows that a two-step approach, in which the system under study is first approximated by an artificial neural network. In the sense of preprocessing, this step provides a training system that can be quickly examined and used to train an ANN-based control algorithm at a reasonable speed. The speed increase in this case is more than 52×.
The control-model generated is based on the NEAT-algorithm and is implemented with an appropriate evaluation and fitness function. The evaluation function observes and evaluates whether a certain range, e.g., 1% of the target cure value, is reached after a certain period of time. Failing to do so results in an instant loss and stop all further gain in the fitness function.
This algorithm results in a usable control that emulates some kind of PD control based on the observed final structure. Applying the control algorithm on the original FE model results in a viable behavior.
In future research, both the control ANN as well as the FE-ANN, can be further enhanced to not only react to a single set of epoxy curing parameters, but rather to obtain a universal epoxy behaviour with variable parameters. This can be archived by training the FE-ANN on different epoxy parameters and even different geometries. Memory cells need to be added to the control algorithm to explore and store the system behavior of a random epoxy system.
A next step will be the implementation of an auto-encoder algorithm to obtain the degree of curing directly from the sensor signal of the real pultrusion system.

C.P. conceived, M.B. supported with the HPC implementation, designed and performed the experiments. C.P., N.A.N. and M.S. commonly analyzed the data and wrote the paper. All authors have read and agreed to the published version of the manuscript.

The NEAT-Algorithm as well as the best model are committed under https://github.com/IMA-ChristianPommer/Pultrususion-FEM-NEAT (accessed on 12 May 2021). (Commit 538ee11). 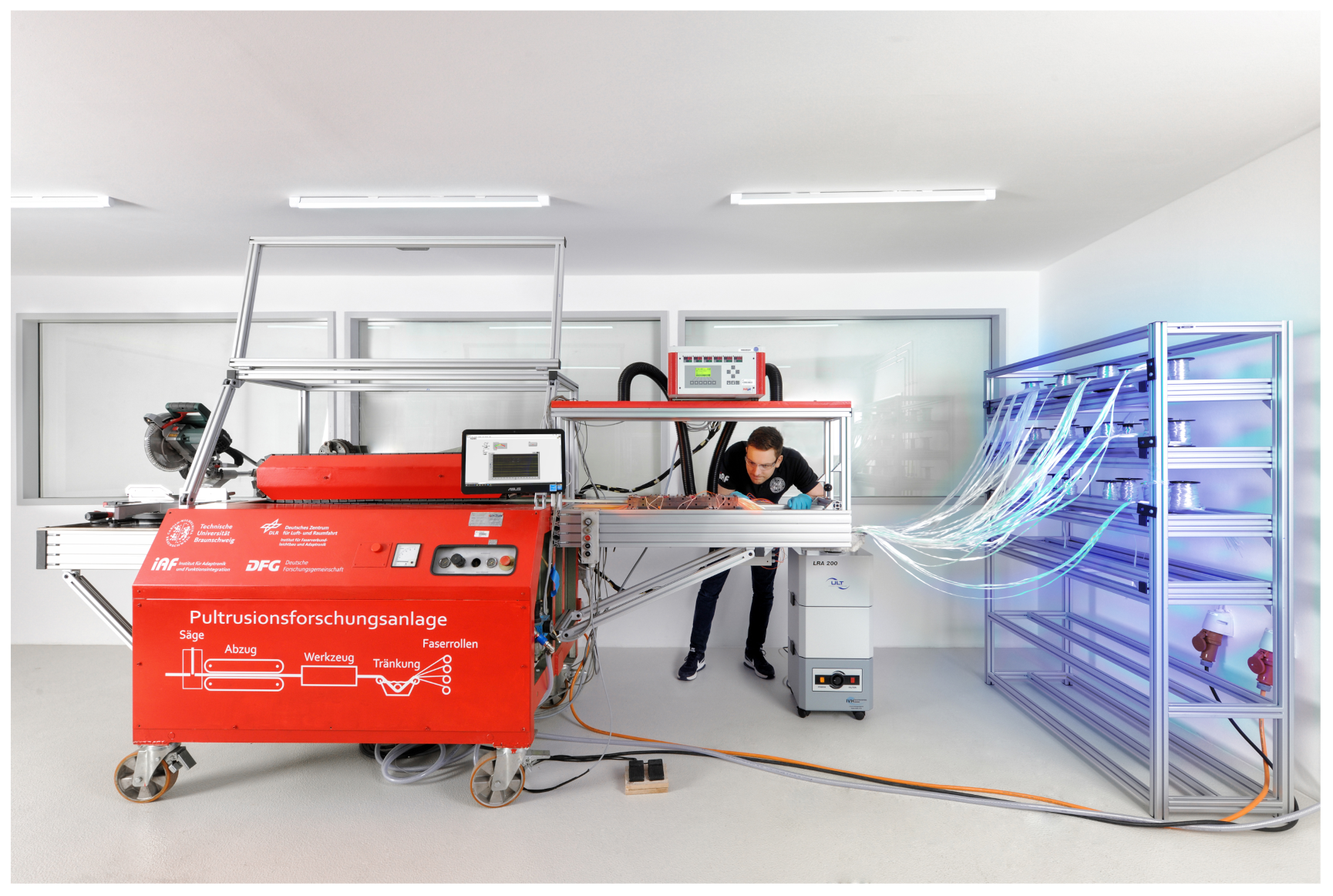 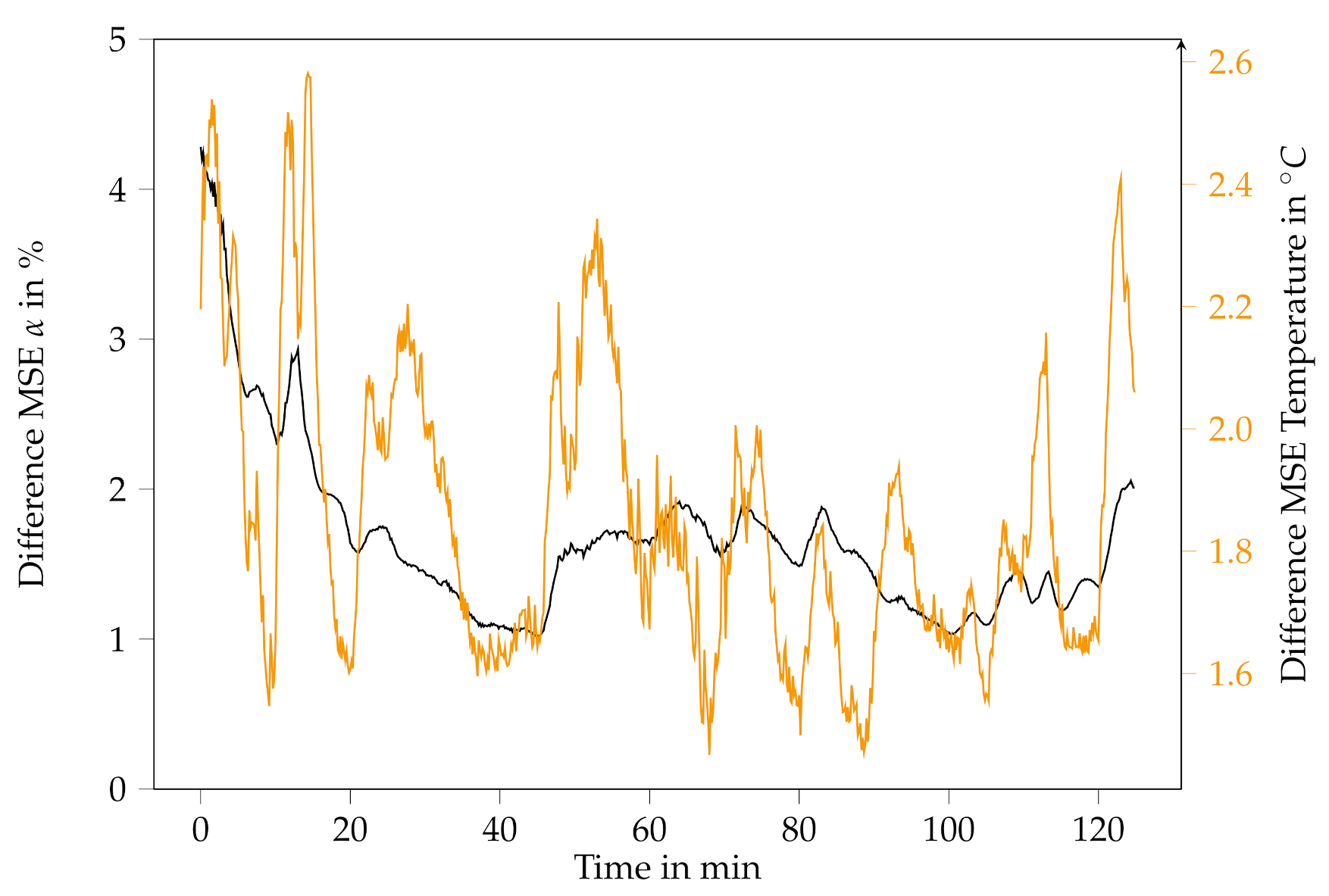 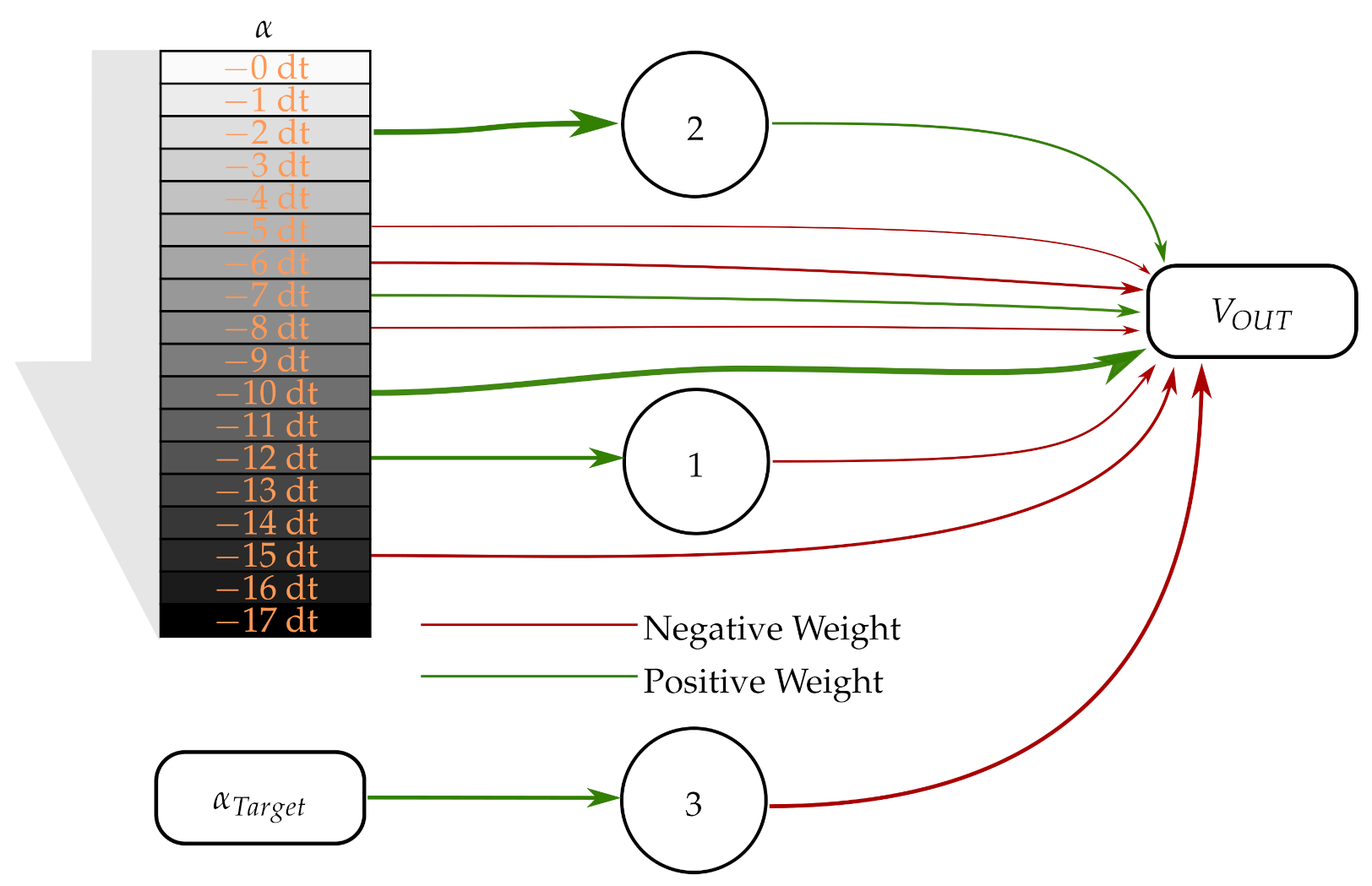 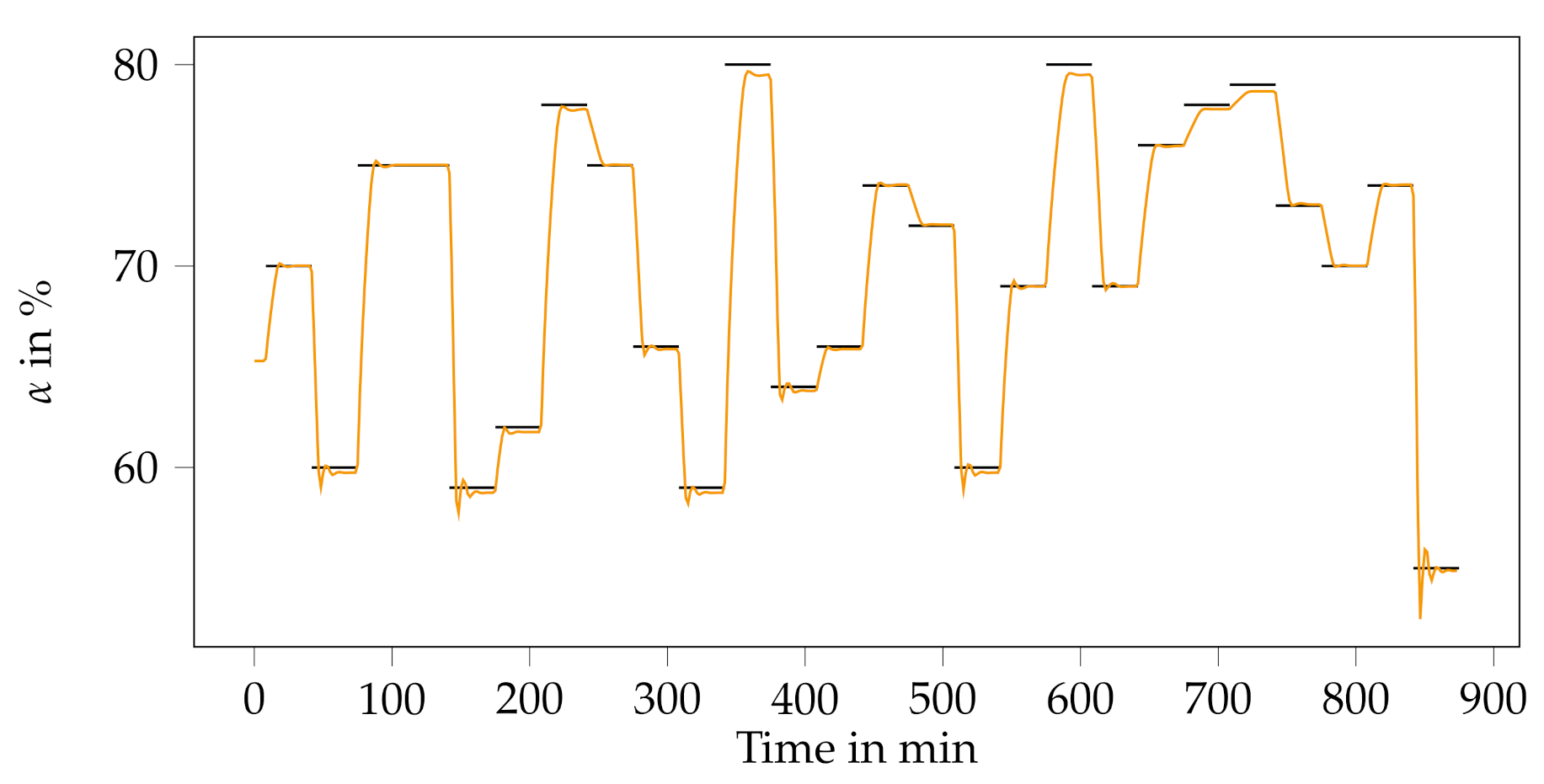