Effects of Experimental Ocean Acidification on the Larval Morphology and Metabolism of a Temperate Sparid, Chrysoblephus laticeps

Ocean acidification is predicted to have widespread impacts on marine species. The early life stages of fishes, being particularly sensitive to environmental deviations, represent a critical bottleneck to recruitment. We investigated the effects of ocean acidification (∆pH = −0.4) on the oxygen consumption and morphometry during the early ontogeny of a commercially important seabream, Chrysoblephus laticeps, up until flexion. Hatchlings appeared to be tolerant to hypercapnic conditions, exhibiting no difference in oxygen consumption or morphometry between treatments, although the yolk reserves were marginally reduced in the low-pH treatment. The preflexion stages appeared to undergo metabolic depression, exhibiting lower metabolic rates along with lower growth metrics in hypercapnic conditions. However, although the sample sizes were low, the flexion-stage larvae exhibited greater rates of metabolic and growth metric increases in hypercapnic conditions. This study shows that the effects of OA may be stage specific during early ontogeny and potentially related to the development of crucial organs, such as the gills. Future studies investigating the effects of climate change on fish larvae should endeavour to include multiple developmental stages in order to make more accurate predictions on recruitment dynamics for the coming decades. View Full-Text
Keywords: ocean acidification; metabolism; oxygen consumption; morphometry; fish larvae; seabream; sparid ocean acidification; metabolism; oxygen consumption; morphometry; fish larvae; seabream; sparid
►▼ Show Figures 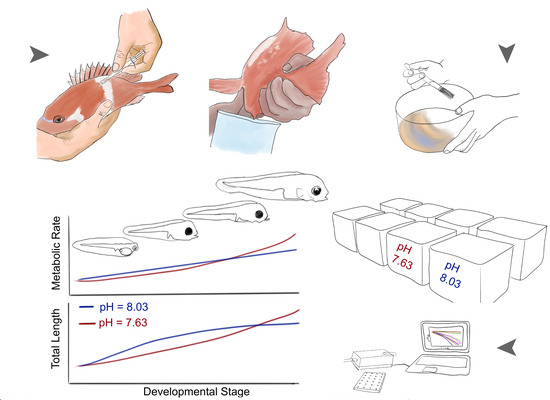