Effects of Experimental Ocean Acidification on the Larval Morphology and Metabolism of a Temperate Sparid, Chrysoblephus laticeps
Previous Article in Special Issue

The harbour seal (Phoca vitulina) is the world’s most widely distributed pinniped species ranging from temperate to Arctic regions (30–78.5° N in the Atlantic, 28–61.2° N in the Pacific), but no detailed overview of the species status exists. The aims of this review are to (i) provide current information on the genetic structure, population status, and threats; (ii) review potential consequences of a changing climate; and (iii) identify knowledge gaps to guide future research and monitoring. Although the species is globally abundant, wide differences exist across the species’ broad range. As climate warms, populations at the edges of the species’ distributional range are likely to be more affected. The primary climate-related drivers include: (i) changes in weather patterns, which can affect thermoregulation; (ii) decrease in availability of haul-out substrates; (iii) large-scale changes in prey availability and inter-specific competition; (iv) shifts in the range of pathogens; (v) increase in temperature favouring the biotransformation of contaminants; and (vi) increased exposure to pollutant from increased freshwater run-off. Multiple anthropogenic stressors may collectively impact some populations. Coordinated monitoring efforts across and within regions is needed. This would allow for a spatially explicit management approach including population-specific responses to known stressors. View Full-Text
Keywords: harbour seal; Phoca vitulina; pinniped; distribution; population status; climate change; edge effect; knowledge gaps harbour seal; Phoca vitulina; pinniped; distribution; population status; climate change; edge effect; knowledge gaps
►▼ Show Figures 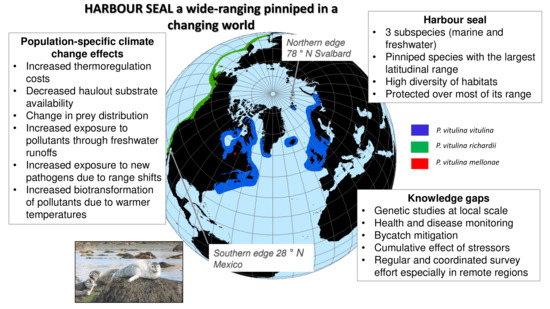