The research presented in this paper proposes a Particle Swarm Optimization (PSO) approach for solving the transit network design problem in large urban areas. The solving procedure is divided in two main phases: in the first step, a heuristic route generation algorithm provides a preliminary set of feasible and comparable routes, according to three different design criteria; in the second step, the optimal network configuration is found by applying a PSO-based procedure. This study presents a comparison between the results of the PSO approach and the results of a procedure based on Genetic Algorithms (GAs). Both methods were tested on a real-size network in Rome, in order to compare their efficiency and effectiveness in optimal transit network calculation. The results show that the PSO approach promises more efficiency and effectiveness than GAs in producing optimal solutions.
Keywords: metaheuristics; bus transit network design; Particle Swarm Optimization. metaheuristics; bus transit network design; Particle Swarm Optimization.

TNDP is formulated as an optimization problem, consisting of the minimization of all resources and costs related to the public transport system with fixed demand. The optimization problem is subject to the route choice model on transit networks as well as to the bus capacity constraints, as well as to a set of feasibility constraints on route length and line frequency. As reported in [29], it can be formally defined as follows: subject to:
As the performance of the transit system depends on the service frequencies, which should be optimized depending on the passenger volumes, an iterative assignment and frequency setting procedure is applied. The procedure consists of an iterative process between the transit demand assignment and the route frequency setting equation:
If the frequency exceeds its maximum operational value, will be the final frequency of line i and an overload for some sections hk will occur (a higher load factor will be accepted). The frequency must not also be lower than a minimum value, since in an urban context it would be perceived by users as no service availability.
The OF is defined as the sum of the operator’s costs , users’ costs , and an additional penalty related to the level of unsatisfied demand :
Transit operator’s costs are computed as a combination of total bus travel distance and total bus travel time. The transit users’ costs are a weighted sum of in-vehicle travel time, access time, waiting time, and a transfer penalty. In order to provide transit services to as many transit users as possible, another additional component is included in the OF. This supplementary term represents a penalty that is proportional to the unsatisfied transit demand of the network; the third term reflects the need to reject the banal solution of minimum cost (zero users and zero service). Thus, the OF formulation is developed to represent specific needs of the transit network and its three terms, measured per hour, can be written as follows: where:
Ia, Ii, Iw,i, In are the set of links hk of the road network, the set of the network lines i, the set of the segments (hk,i) of line i, and the set of the nodes of the transit network, respectively;
qwhk,i shows the boarding passengers on segment (hk,i) of line i;
tphk,i and twhk,i indicate the travel time and the waiting time for segment (hk,i) of line i, respectively;
ntn is the number of transfers at node n;
pt is the time penalty associated to a transfer;
qahk shows the pedestrians flow on link hk of the road network;
tahk indicates the access travel time on link hk of the road network;
pu is the time penalty associated with an unsatisfied transit user;
Du is the unsatisfied transit demand;
Ckm is the unit cost factor depending on the total bus distance travelled, namely the vehicle operating cost;
Ch is the unit cost factor depending on the total time of bus service, namely the travelling personnel’s cost;
Cu is the average monetary value of time for the users; and
W1, W2, and W3 are a set of weights that reflect the relative importance that the decision-maker assigns to each of the three cost components.
The input data are the public transport AM peak-hour demand matrix, the characteristics of the road network available for bus service, and the operating and users’ unit costs. The outputs are optimal bus routes, the associated frequencies, the total costs, and the vector of loads on the public transport network.
Given the well-known non-convexity of the problem and the heuristic nature of the method, there is no guarantee that the solution found, indicated as , will be the global minimum.

PSO Algorithm for the Optimization of the Bus Network

The PSO algorithm used in the model is organized in the following steps:

This paper proposes a PSO approach procedure for solving the bus network design problem. The solving procedure consists of a set of heuristics, which includes a first routine for route generation based on the flow concentration process, and a PSO algorithm to find an optimal or near-optimal network of routes with the associated frequencies. The main novelty introduced is the use of this optimal solution calculation technique and its application to a transit network design methodology. It was developed for a large urban area (the city of Rome), characterized by three aspects: (a) a complex road network topology, not simply represented as radial or grid network; (b) a multimodal public transport system (a rapid rail transit system, buses, and tramways lines); and (c) a many-to-many transit demand.
The robustness and effectiveness of the model in producing optimal solutions was proved and the PSO approach was demonstrated as suitable if combined with the HRGA. The application of the PSO algorithm to the set of routes created in the route generation step, from which the solving procedure created the swarm and particles for the optimal solution, highlighted that PSO is more efficient and effective than GAs. The analysis of the optimal solutions showed that PSO provides a lower minimum value of OF than the GA in most of the five created scenarios. These minimum values were also reached in a lower number of iterations. The best solution among the five provided scenarios (composed of 130 lines) shows the expected results also in the comparison between the OF components. In fact, transit demand can be served effectively (a reduction of 33% in waiting time) by a bus network composed of a lower number of lines (a reduction of 40%) in a more efficient way (a reduction of 10% in the operating costs), still guaranteeing the same area coverage as the current system.
Further developments might focus on a multi-objective approach in the definition of the OF terms and on the use of different optimization techniques, such as ACO algorithms. It would be worth testing this solving technique to feeder bus network design problems. The research agenda also includes an application of this procedure to a different version of Rome’s current network, with almost 1330 traffic zones. Finally, additional refinements and improvements of the PSO structure and parameters could be necessary for a further decrease in computational times. 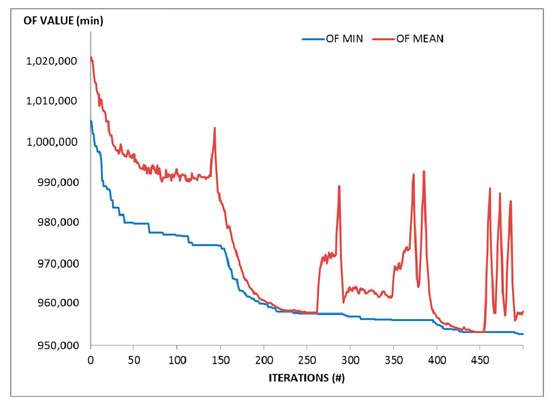 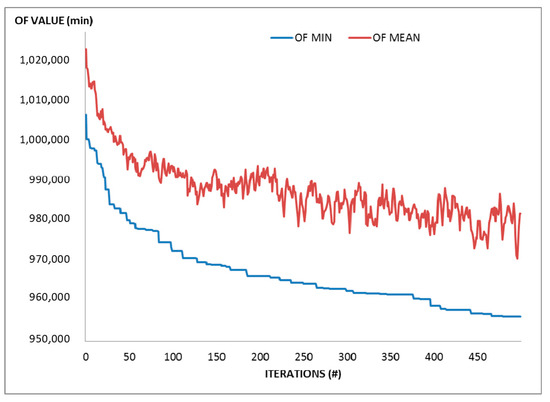 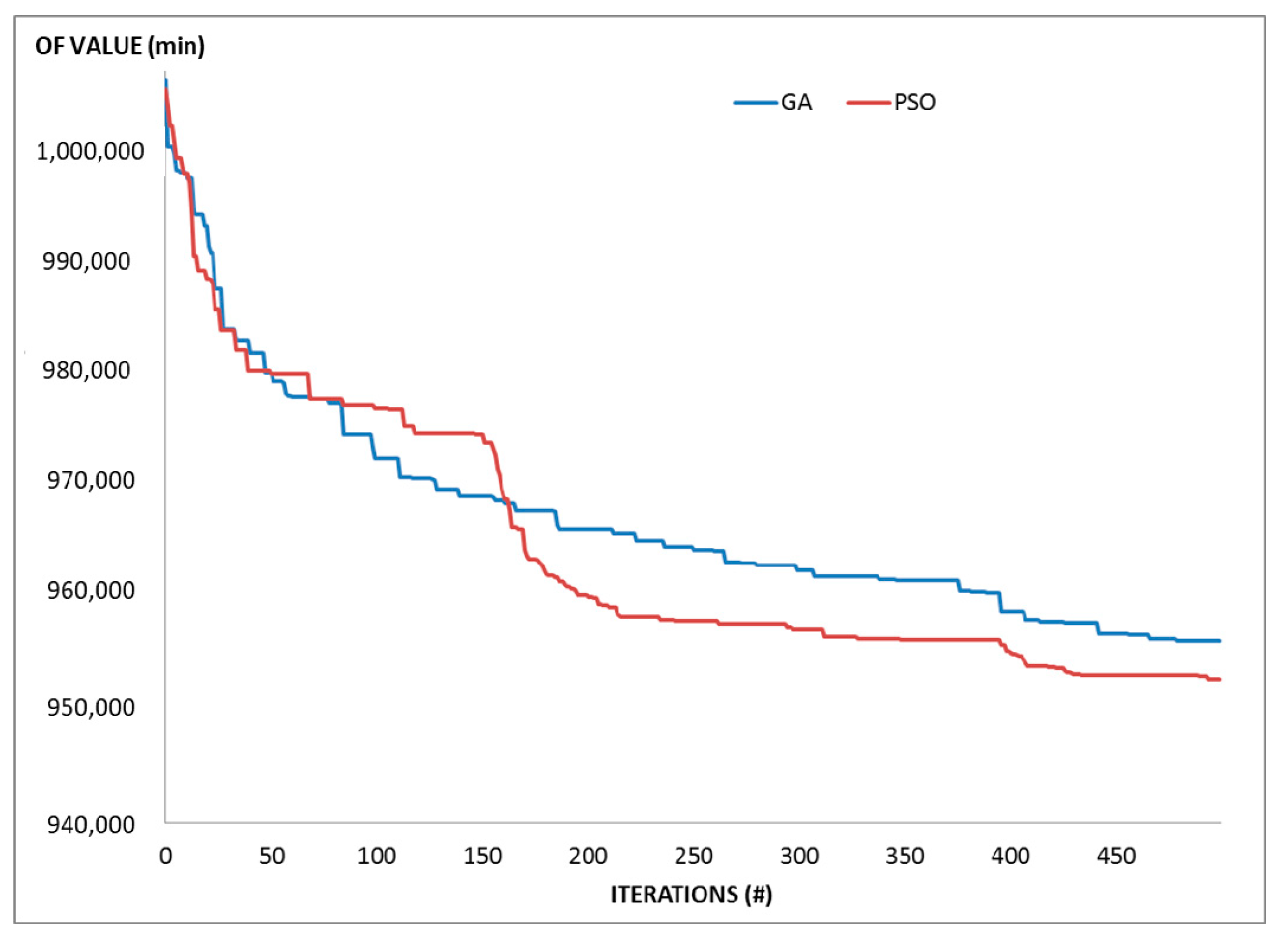