Digital Systems in Smart City and Infrastructure: Digital as a Service
Previous Article in Journal

Ethics and Law in the Internet of Things World

The Smart City Scheme, as part of the Smart Mauritius initiative, adopted by the Government of Mauritius in 2014, heavily incentivised the emergence of new smart cities in greenfields. The resulting migration of business and residents from existing cities to new cities affected the liveability standard of existing cities and encouraged property speculation. This shift reduced home pricing affordability further from the grasp of young professionals. With the Mauritian Landlord and Tenant Act of 1999 discouraging investment in Mauritian city centres, property developers were additionally encouraged to invest in housing projects in these emerging Smart Cities. As part of the Smart Urban Regeneration strategy of Port Louis that sought to reduce competition between new and existing cities, the provision of housing was seen as paramount to enabling the Smart Cities concept as promoted by the Government. The findings of this paper, which explores the urban footprint of Port Louis through field survey, provides insights, as to the components of the city, that can assist policy-makers and developers to better shape projects that are more responsive to the Smart Urban Regeneration plan. View Full-Text
Keywords: smart city; urban regeneration; Port Louis; Mauritius; footprint; urban survey smart city; urban regeneration; Port Louis; Mauritius; footprint; urban survey
►▼ Show Figures 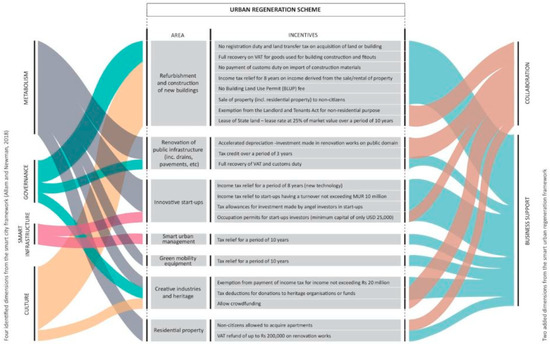