The interaction of a turbulent flow with the leading edge of a blade is a main noise source mechanism for fans and wind turbines. Motivated by the silent flight of owls, the present paper describes an experimental study performed to explore the noise-reducing effect of comb-like extensions, which are fixed to the leading edge of a low-speed airfoil. The measurements took place in an aeroacoustic wind tunnel using the microphone array technique, while the aerodynamic performance of the modified airfoils was captured simultaneously. It was found that the comb structures lead to a noise reduction at low frequencies, while the noise at high frequencies slightly increases. The most likely reasons for this frequency shift are that the teeth of the combs break up large incoming turbulent eddies into smaller ones or that they shift turbulent eddies away from the airfoil surface, thereby reducing pressure fluctuations acting on the airfoil. The aerodynamic performance does not change significantly. View Full-Text
Keywords: wind turbine; leading edge noise; turbulence interaction noise; comb wind turbine; leading edge noise; turbulence interaction noise; comb
►▼ Show Figures 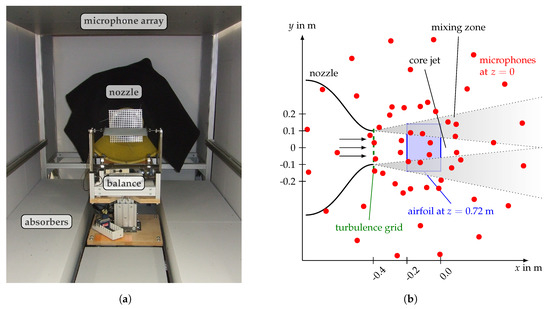