The Multifactorial Etiopathogeneses Interplay of Inflammatory Bowel Disease: An Overview

Characteristics and Clinical Outcomes of Individuals at High Risk for Pancreatic Cancer: A Descriptive Analysis from a Comprehensive Cancer Center

Pancreatic cancer (PC), a leading cause of cancer-related deaths in the United States, is typically diagnosed at an advanced stage. To improve survival, there is an unmet need to detect pre-malignant lesions and early invasive disease. Prime populations to study for early detection efforts include cohorts of high risk individuals (HRI): those with increased risk to develop pre-malignant pancreatic cysts and PC because of a familial or hereditary predisposition to the disease and those in the general population of sporadic cases who are incidentally found to harbor a pre-malignant pancreatic cyst. The objective of this study was to describe the characteristics and clinical outcomes of cohorts of HRI identified at Moffitt Cancer Center. We set out to determine the uptake of screening, the prevalence and characteristics of solid and cystic pancreatic lesions detected via screening or as incidental findings, and the age at which lesions were detected. Of a total of 329 HRI, roughly one-third were found to have pancreatic lesions, most of which constituted pre-malignant cysts known as intraductal papillary mucinous neoplasms. Individuals with the highest genetic risk for PC were found to have smaller cysts at a much earlier age than sporadic cases with incidental findings; however, many individuals at high genetic risk did not have abdominal imaging reports on file. We also identified a subset of HRI at moderate genetic risk for PC that were found to have cystic and solid pancreatic lesions as part of a diagnostic work-up rather than a screening protocol. These findings suggest the pancreatic research community should consider expanding criteria for who should be offered screening. We also emphasize the importance of continuity of care between cancer genetics and gastrointestinal oncology clinics so that HRI are made aware of the opportunities related to genetic counseling, genetic testing, and screening. View Full-Text
Keywords: pancreatic cancer; intraductal papillary mucinous neoplasm; mucinous cystic neoplasm; pancreatic intraepithelial neoplasm; mutation carriers; familial pancreatic cancer pancreatic cancer; intraductal papillary mucinous neoplasm; mucinous cystic neoplasm; pancreatic intraepithelial neoplasm; mutation carriers; familial pancreatic cancer
►▼ Show Figures 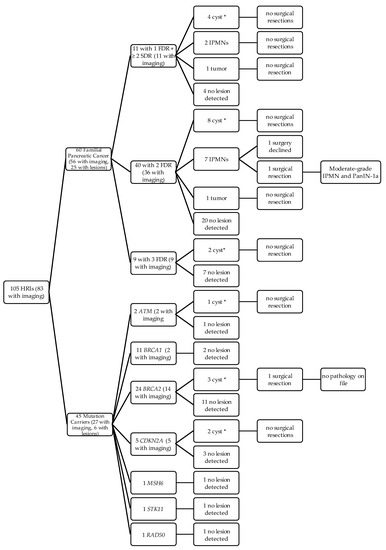