Previous studies have suggested that carbonated beverages may cause gastro-oesophageal reflux. Pepsin (the major enzyme secreted by the stomach) has been suggested to be an objective, acute marker of a reflux event. This pilot study aimed to investigate whether intake of carbonated beverages could affect pepsin concentration in saliva or reflux symptoms. This was assessed by a randomised, crossover trial where participants consumed 330 mL of beverage (carbonated cola, degassed cola or water) at separate visits. Saliva samples and symptom questionnaires were collected at baseline and over the 30 min postprandial period. Pepsin was detected in all saliva samples. No difference was found in the salivary pepsin concentrations between treatments at all time points. There were significantly higher scores (p > 0.05) for feelings of fullness, heartburn, urge to belch and frequency of belches after ingestion of carbonated cola than degassed cola and water. The ingestion of carbonated beverages did not appear to increase postprandial pepsin concentration in saliva compared to other beverages but did evoke higher levels of reflux-related symptoms such as fullness, heartburn and belching. This suggests carbonated beverages may cause symptoms associated with reflux but do not drive detectable levels of gastric juice to reach the oral cavity. View Full-Text
Keywords: gastro-oesophageal reflux; pepsin; carbonated beverages; non-invasive monitoring; diet and reflux gastro-oesophageal reflux; pepsin; carbonated beverages; non-invasive monitoring; diet and reflux
►▼ Show Figures 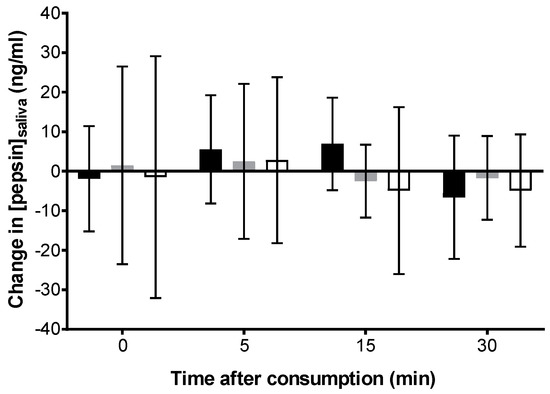 
Lim, Shi X.B.; Brownlee, Iain A. 2019. "Assessment of the Acute Effects of Carbonated Beverage Consumption on Symptoms and Objective Markers of Gastric Reflux." Gastrointest. Disord. 1, no. 1: 30-38.