Receptor Regulation in Taste: Can Diet Influence How We Perceive Foods?

Monthly length-frequency data, from 2009 to 2014, was used to estimate the growth parameters, mortality, and spawning season, and to assess the exploitation status of Thryssa vitrirostris (Engraulidae) fisheries in Pebane. The von Bertalanffy asymptotic length (L∞) and growth rate (K) were 25.1 cm (standard length) and 0.41 per year (standard length), respectively. Two proxy recruitment peaks were found: the first peak of recruitment occurs from April to July, and the second recruitment peak from September to October. The total estimated mortality rates (Z), natural mortality (M), and fishing mortality (F) were Z = 1.31, M = 0.92, and F = 0.39. For the beach seine gear, the size at first catch of T. vitrirostris was Lc25 = 4.43 cm. The 50% retention size of the catch was Lc50 = 5.39 cm. The retention probability analyses revealed a large rate of juvenile fishing mortality (54.2%). The estimated exploitation rate (0.30) was below the maximum exploitation rate (0.48), and above the optimal sustainable exploitation rate (E50 = 0.28), evidencing a sustainable fishery. However, under such an exploitation regime, it is advised that a continuously monitoring-survey of T. vitrirostris is maintained. An increase in migration of fishermen has been recently recorded in Pebane, due to its rich fisheries, which can increase the fishing effort and the risk of overexploitation if management measures (such as mesh size increase) are not taken in advance. View Full-Text
Keywords: beach seine; growth parameters; yield-per-recruitment; biomass-per-recruitment; fishing mortality; recruitment trends beach seine; growth parameters; yield-per-recruitment; biomass-per-recruitment; fishing mortality; recruitment trends
►▼ Show Figures 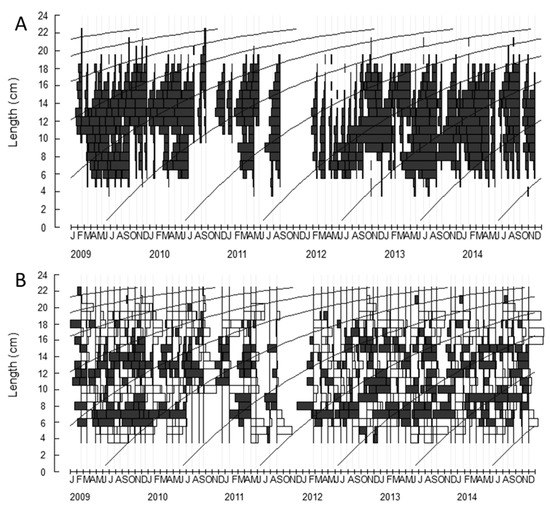