This study investigates proximate drivers of cropland and forest degradation in the Kloto district (Togo, West Africa) as a way of exploring integrated sustainable landscape approaches with respect to socioeconomic and environmental needs and requirements. Net change analysis of major cash and food crops based on Landsat data from three time steps (1985–2002, 2002–2017, and 1985–2017) and quantitative analysis from participatory survey data with farmers and landowners are used. The study underlines poor agricultural systems and cassava farming as major factors contributing to the alarming forest losses between 1985 and 2017. A significant net loss in forest cover of 23.6% and areas under maize and cocoa agroforestry farming of 12.99% and 10.1% between 1985 and 2017, respectively, was noted. These significant losses are due to intensive cassava cropping (38.78%) and settlement expansion (7.87%). Meanwhile, the loss of forest cover between 2002 and 2017 was marginal (8.36%) compared to the period 1985–2002, which had a considerable loss of 15.24%. Based on participatory surveys, the majority of agricultural lands are threatened by erosion or physical deterioration (67.5%), land degradation or salt deposits and loss of micro/macro fauna and flora (56.7%), declines in soil fertility (32.5%) and soil water holding capacity (11.7%), and changes in soil texture (3.3%). Most farmers adhere to the proposed climate smart practices, with an emphasis on cost-effective drip irrigation systems (45.83%), soil mulching (35%), and the adoption of drought-resilient varieties (29.17%) to anticipate adverse spells. We conclude that low adoption of improved soil conservation, integrated water management, and harvesting systems and the use of less productive and adaptive cultivars entail extreme degradation of cropland and a decline in crop productivity. Consequently, farmers are forced to clear more forest in search of stable and healthy soil to meet their food demands and improve their livelihood. Capacity building on integrated pathways of soil and land management practices is therefore needed to ensure sustainable and viable socio-ecological systems at a local scale. View Full-Text
Keywords: forests; agricultural systems; land degradation; food security; climate change; remote sensing; survey datasets; Kloto district forests; agricultural systems; land degradation; food security; climate change; remote sensing; survey datasets; Kloto district
►▼ Show Figures 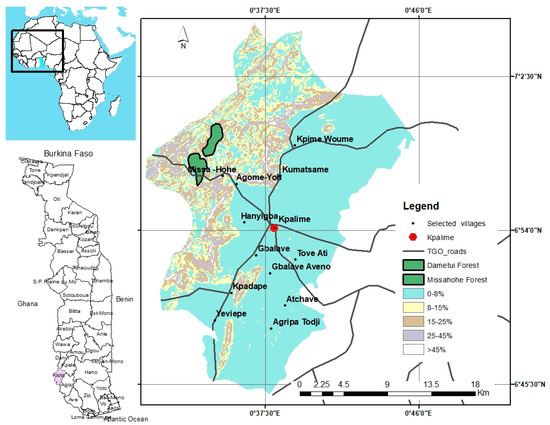