Understanding soil production of the trace gas carbonyl sulfide (OCS) is key to its use as a tracer of ecosystem function. Underlying its application is the observation that vascular plants consume atmospheric OCS via their stomatal pores in proportion with CO2 photosynthesis and that soil fluxes of OCS are negligible in comparison. Recent soil-centered studies demonstrate that soils can produce OCS and contribute as much as a quarter of the atmospheric terrestrial flux. Despite the potential widespread importance of soil OCS emissions, insufficient data exist to predict variations in OCS production across ecosystems, and the chemical and biological drivers of OCS production are virtually unknown. In this study, we address this knowledge gap by investigating variables controlling OCS soil production including soil physical and chemical properties, microbial community composition, and sulfur speciation in two independent surveys. We found that soil OCS production was nearly ubiquitous across the 58 sites, increased exponentially with temperature, and was insensitive to visible light conditioning. Soil pH, N, and C/N were predictors of OCS soil production rates in both soil surveys. Patterns in soil S speciation and predicted microbial S-cycling pathways both pointed to S-containing amino acids such as cysteine and methionine and their derivatives as potential precursors for OCS production. Elevated sulfate levels were associated with OCS production in some soils. This study provides new mechanistic insight into OCS production in soils and presents strategies to represent soil OCS fluxes that facilitate the use of OCS as a tracer for leaf-level processes related to carbon and water cycling. View Full-Text
Keywords: carbonyl sulfide; OCS; COS; sulfur cycle; soil; carbon cycle carbonyl sulfide; OCS; COS; sulfur cycle; soil; carbon cycle
►▼ Show Figures 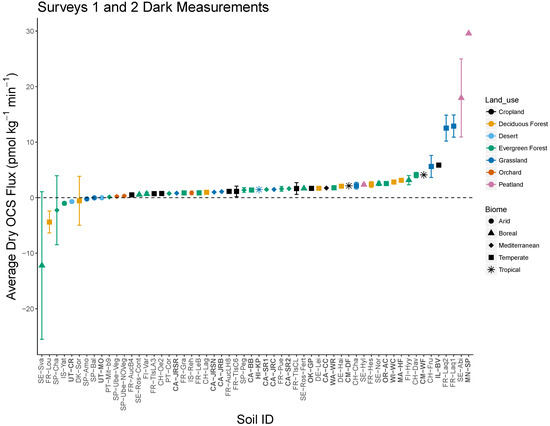