Pseudoaneurysm of the Inferior Pancreaticoduodenal Artery Due to Cholecystitis

Visceral artery aneurysms and pseudoaneurysms are a rare finding and has an estimated prevalence of 0.01% to 0.2% [1]. The incidence of pseudoaneurysms or aneurysms of the superior and inferior pancreaticoduodenal arteries has been reported as approximately 10% [2]. Some cases are associated with pancreatitis, with effects of the peripancreatic arteries likely due to the presence of pancreatic enzymes following an attack [2]. There is a high mortality rate of between 20–70% [3].
To our knowledge this is the only case of a pseudoaneurysm of the inferior pancreaticoduodenal artery, presenting because of a severe attack of cholecystitis. We present the persistence of the patient’s symptoms and the complexities of her management.

We report a 58-year-old lady who presented to a district general hospital with mild epigastric pain, pyrexia, dysphagia, and vomiting two hours following food intake. She had been discharged three days before, following treatment for acute cholecystitis and antibiotics, and was well on discharge.
Past medical history included angina and gastro-oesophageal reflux disease. Past surgical history included a mastectomy, appendicectomy and tubal sterilisation. She was allergic to cyclizine and took omeprazole regularly. There was no relevant family history. She was an ex-smoker of twenty years with a fifteen-pack year history and was teetotal.
On examination, her abdomen was soft and mildly tender in the epigastric region with no evidence of peritonism. Her bowel sounds were present and she was apyrexial haemodynamically stable.
Her blood samples on re-admission showed a haemoglobin level of 117 g/L (131–166 g/L) and an acute kidney injury with urea levels of 23.8 mmol/L (2.5–7.8 mmol/L) and creatinine of 200 umol/L (62–106 umol/L). She was treated conservatively with aggressive fluids to improve her acute kidney injury, which did resolve.

2.1. Computed Tomography of Abdomen and Pelvis with Contrast (Day of Re-Admission Admission)

The thick-walled gallbladder, containing sludge, air and stones remained unchanged (Figure 1). No intra- or extra-hepatic bile duct dilatation was observed. The first and second part of the duodenum was distended (Figure 1) and fluid-filled with an apparent transition point in the third part.
On the third day of admission, a cholecystostomy was placed. A nasogastric tube was inserted to relieve the vomiting, but this did not ease her symptoms. She improved following an oesophagogastroduodenoscopy on day nine but was only able to eat small amounts. The patient was started on total parenteral nutrition ten days following her re-admission. Twelve days following admission, her vomiting worsened significantly and a repeat oesophagogastroduodenoscopy under general anaesthetic was performed to insert a nasojejunal tube. This resulted in the vomiting and nausea improving significantly.

2.2. Computed Tomography of Abdomen and Pelvis with Contrast (Day Four of Re-Admission)

There was moderate sized diverticulum at this level, associated with a thickened third and fourth part of the duodenum. These changes could be due to inflammation or infection.

2.3. Computed Tomography of Abdomen and Pelvis with Contrast (Day Five of Re-Admission)

There was thickening of the duodenal wall with adjacent fat stranding, with acute and resolving cholecystitis.

2.4. Computed Tomography of Abdomen and Pelvis with Contrast (Day Eleven of Re-Admission)

There was persistent thickening and inflammation of third/fourth part of the duodenum, with structuration, but without any localised perforation.

2.5. Computed Tomography of Abdomen and Pelvis with Contrast (Day Twenty of Re-Admission)

There was a 6 mm inferior pancreaticoduodenal artery pseudoaneurysm, which was not apparent on previous imaging (Figure 2). There was mild stenosis involving the origin of the coeliac axis. Additional observations included: Haematoma around D3 and a gastric outlet obstruction resolving; gallstones within a distended mildly thick-walled gallbladder, with no surrounding inflammatory changes; no biliary dilatation; normal pancreas; a small periampullary diverticulum; generalised atherosclerosis; moderate sigmoid diverticulosis with scattered diverticulae throughout the rest of the colon.

Normal mucosal tissue appeared throughout the second part of the duodenum.

The observations were standard.

Normal mucosal appeared throughout to second part of the duodenum. There was a stricture at the junction of the second and third part of the duodenum. A nasojejunal tube was sited appropriately and no biopsies were taken.
The patient was transferred to a tertiary centre for endoscopic ultrasound and biopsies on day twenty-five.

The appearances were normal. A pseudoaneurysm was noted adjacent to the junction of the second and third part of the duodenum, which was causing compression.

No evidence of Coeliac disease and normal duodenal mucosa was noted. In addition, we observed no evidence of malignancy or Giardia infection.
Given her condition and the pathology found, she underwent an embolisation of the inferior pancreaticoduodenal artery via the common femoral artery (Figure 3) on day twenty-six. This was performed using a SIM1 catheter to catheterise the coeliac axis and gastroduodenal artery, revealing reverse flow in the gastroduodenal artery.
Perioperative amylase was elevated at 188 IU/L but improved over time. She did very well and was discharged on the thirty-third day of admission. Though she still had nausea, this was controlled with ondansetron and she was able to eat oral nutrition. She did very well at her follow up and her symptoms had resolved, not requiring re-admission, and awaiting a laparoscopic cholecystectomy.

The most common causes of inferior pancreaticoduodenal pseudoaneurysms are iatrogenic or following trauma [1]. Approximately 30% of inferior pancreaticoduodenal pseudoaneurysms or aneurysms are due to pancreatitis. [4] A common symptom would be epigastric pain, if this was the cause. Our patient presented with mild epigastric pain but her main complaint was nausea and vomiting throughout her admission. It is uncommon for a pseudoaneurysm or aneurysm of the inferior pancreaticoduodenal artery to arise because of cholecystitis. We found one case to date of an inferior pancreaticoduodenal artery aneurysm, as opposed to pseudoaneurysm, where the presentation was very acute and the patient required a laparotomy [5].
Cases of pancreaticoduodenal artery aneurysms have caused nausea and vomiting, and this was normally due to gastric outlet obstruction [6,7]. A case of a pancreaticoduodenal aneurysm arising from a pancreatic pseudotumour caused a duodenal obstruction, giving symptoms of nausea and vomiting [8]. Our patient had duodenal ileus and distension initially and as her admission progressed, she developed a gastric outflow obstruction.
Morbidity and mortality from a rupture of pancreaticoduodenal pseudoaneurysms have been reported as greater than 25% [9]. Treatment, therefore, needs to be appropriate and tailored to the patient. Our patient did not actually show her pathology on the computed tomography scans until day twenty and at this time urgent tertiary input was sought, her management before then was to control her symptoms and focused on nutrition.
Treatment in these patients is difficult and governed by how symptomatic they are. There are no definitive guidelines. A review suggested that treatment of visceral artery aneurysms or pseudoaneurysms should be considered if the aneurysms are symptomatic, greater than 2 cm in size, or if it has ruptured [10]. Our patient had a small pseudoaneurysm, but this was symptomatic and that, combined with her pathology and the risk of rupture, was ultimately why we took the approach to proceed with an intervention.
Treatment options include either surgical repair or embolisation. Surgical repair usually avoids arterial reconstruction, in favour of ligation of the aneurysm and allowing the mesenteric collateral circulation to prevent infarction of the organs supplied by the ligated vessel. One case series included seven patients, which had symptomatic pancreaticoduodenal aneurysms and showed good results with emobolisation [9]. Endovascular stent-graft placement has been successful in treating splenic artery aneurysms [11], but there is lack a of data regarding this treatment modality in the inferior pancreaticoduodenal artery. In our case, embolisation was opted for, as we are a high-volume centre with expertise in embolisation and felt that the scans meant this was an amenable approach and would facilitate a positive outcome.
Our patient had a robust workup and this allowed for a clear understanding of the pathology. The clinical course of how this developed took time and was challenging throughout. When the diagnosis was made, it was clear that intervention was required. This was a rare occurrence, but as demonstrated in the literature, can have serious complications. Management of these patients needs to be based on symptoms, with guidance from tertiary centre advice when a diagnosis has been made.
Consent: Consent was gained directly from the patient.

Pseudoaneurysm of the inferior pancreaticoduodenal artery is a rare occurrence. Cholecystitis is a rare cause of pseudoaneurysm of the inferior pancreaticoduodenal artery. Input from tertiary centres should be sought early. Interventional treatment of these patients should be performed once conservative measures have been exhausted and according to the patient’s symptomatology. 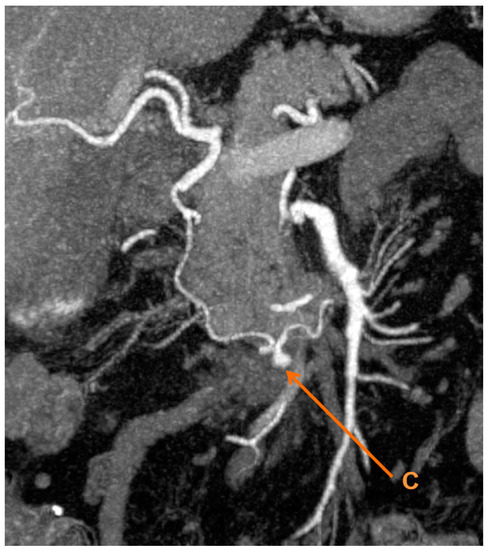 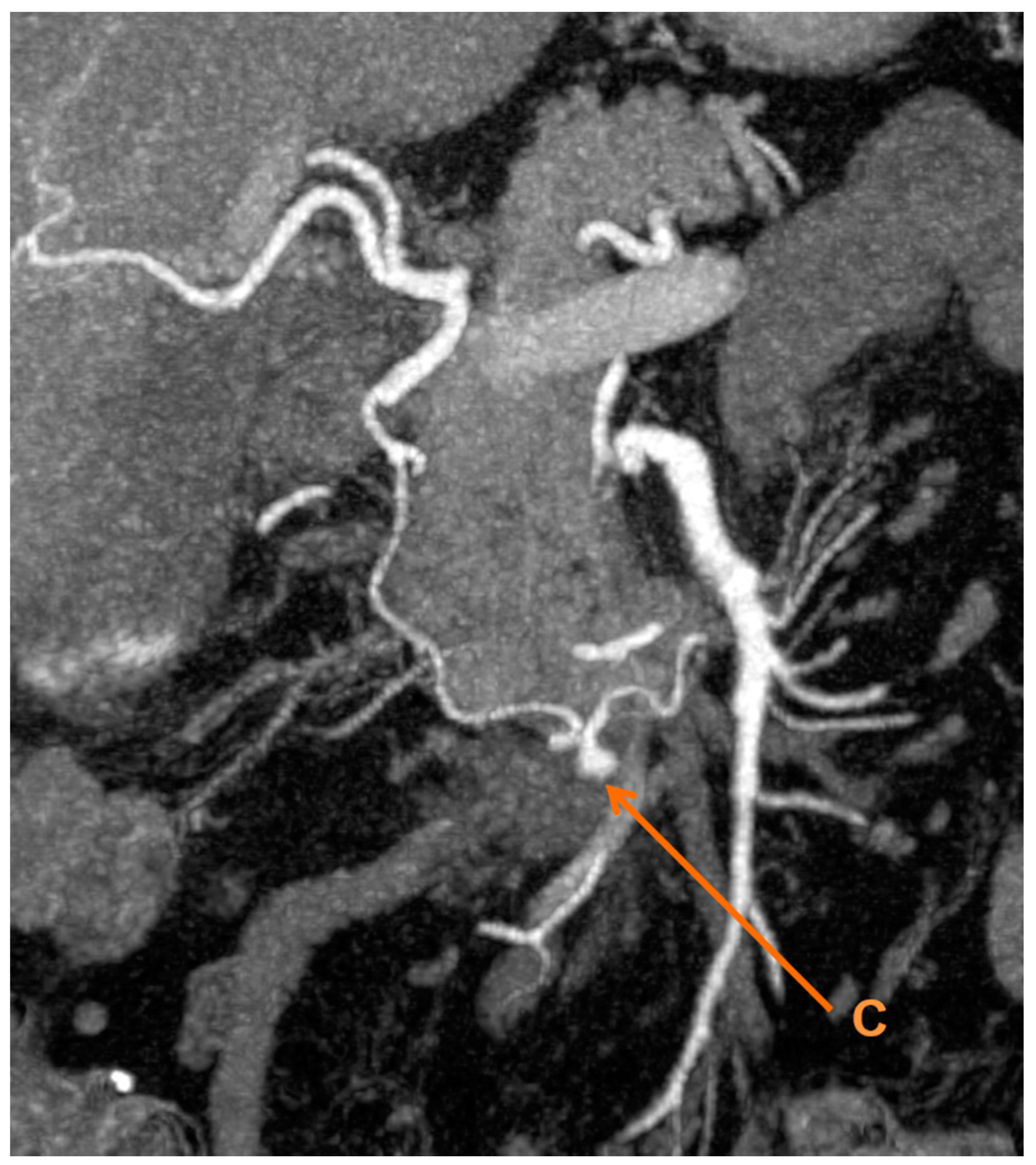