This paper investigates friction-induced self-excited vibration in a bi-stable compliant mechanism. A single-degree-of-freedom oscillator, hanged vertically, vibrates on a belt moving horizontally with a constant velocity. The oscillator is excited through the frictional input provided by the belt. The friction coefficient is defined as an exponentially decaying function of the sliding velocity. Due to the specific configuration of spring and damper, the normal contact force is variable. Therefore, the friction force is a function of the system states, namely, slider velocity and position. Employing eigenvalue analysis gives an overview of the local stability of the linearized system in the vicinity of each equilibrium point. It is shown that the normal force, spring pre-compression and belt velocity are bifurcation parameters. Since the system is highly nonlinear, a local analysis does not provide enough information about the steady-state response. Therefore, the oscillating system is studied numerically to attain a global qualitative picture of the steady-state response. The possibility of the mass-belt detachment and overshoot are studied. It is shown that one equilibrium point is always dominant. In addition, three main questions, i.e., possible mass-belt separation, location of stick-slip transition and overshoot are answered. It is proven that the occurrence of overshoot is impossible. View Full-Text
Keywords: stick-slip; friction-induced vibration; Stribeck effect; Hopf-bifurcation; pitchfork bifurcation; variable normal force; bi-stable compliant mechanism stick-slip; friction-induced vibration; Stribeck effect; Hopf-bifurcation; pitchfork bifurcation; variable normal force; bi-stable compliant mechanism
►▼ Show Figures 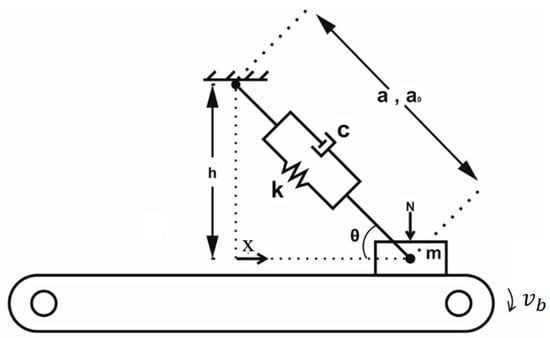