A medium-fine silica sand (0.595–0.125 mm diameter, AGSCO Corporation; Wheeling, IL, USA) was selected as a soil surrogate for all experiments in this study. Shillito et al. [47] used the same type of sand for their experiments on -SWR and soil hydraulics properties. In preparation for the experiments, the sand was cleaned using 0.003 M hydrochloric acid (Fisher Scientific, Fair Lawn, NJ, USA) followed by an extensive rinse with ultra-high purity water (18 MΩ cm−1) produced with an ELGA water system (ELGA® LabWater, Woodridge, IL, USA). After acid washing, the sand was placed into a tray covered with aluminum foil and dried in an oven at 105 °C for 48 h. The acid-washed and oven-dried sand is hereafter referred to as untreated or “blank” sand. As a proxy for SOM, the Suwannee River fulvic acid standard (2S101F) (International Humic Substances Society (IHSS), St. Paul, MN, USA) was added to a subsample of untreated sand (Table 1). The ash was produced during the burning of Jeffrey pine biomass and collected from the surface of the burning platform after the burns were completed (Figure S3; Supplementary Material (SM)).
The WDPT tests were carried out following the procedures described by Badía-Villas et al. [40] and Zavala et al. [41]. Briefly, sand and ash samples were placed in aluminum containers (diameter of 6 cm). The sand (mass of ~40 g) and ash surfaces were flattened and smoothed as shown in Figure S3 (SM) so that water droplets would not roll off the surface. Water droplets (mass of 25 ± 4 mg) were applied to the sample surfaces using a disposable 2 mL glass pipette (VWR, Radnor, PA, USA) with a latex bulb (Fisher Scientific, Pittsburg, PA, USA). The glass pipette was graduated by weighing the water droplets with an analytical balance (Mettler Toledo LLC, Columbus, OH, USA). Five to six droplets of ultra-high purity water were placed onto the sample surfaces from a height of ~1 cm, and the WDPT was determined as the average time it took for the droplets to be absorbed by the sand or ash samples (Figure S3; SM).
The water repellency of the sand was also determined in terms of the effective contact angle α of the water on the sand surface. A solid surface with α = 0° is considered perfectly wettable, while increasing effective contact angles (α > 0°) indicate increasing levels of water repellency. Shillito et al. [52] developed an empirical relationship between the WDPT and the effective contact angle for this sand. In their experiments, the sand was first acid-washed then oven-dried. One batch of sand remained untreated (“blank sand”), while the second batch of sand was sprayed with ScotchgardTM to induce water repellency. Known amounts of treated and untreated sand were mixed proportionally by mass; a “20% treatment” was comprised of 20% ScotchgardTM-treated sand and 80% untreated sand. The effective contact angles for various water repellency treatments were determined by wicking experiments [56,57] as well as by direct measurements using an optical tensiometer (Attension Theta, Biolin Scientific, Gothenburg, Sweden). The WDPT of the water repellent sand treatments were measured as described above, and the average drop times were recorded for the treated sand. Based on these WDPT and effective contact angle measurements, the following empirical relationship between the WDPT (in seconds) and the effective contact angle α was developed: with a coefficient of determination (R2) of 0.89. This equation was used to calculate the effective contact angles associated with the WDPTs of the burn experiments, with the results shown in Table 2.
Shillito et al. [52] also established a physically-based model that relates SWR with infiltration through the effective contact angle and sorptivity S, a soil hydraulic property that captures water absorption by the soil as a function of capillary and viscous forces. Shillito et al. [52] showed that the sorptivity was highest for low effective contact angles (low water repellency) and low water content and decreased as the contact angle (water repellency) increased. Shillito et al. [52] also proposed the following empirical relationship between the relative sorptivity S/S0 and WDPT (in seconds) for the same sand used in this study: where S is the sorptivity of the treated sand (mm s−1/2) and S0 is the sorptivity of the air-dried, untreated sand (mm s−1/2) with a coefficient of determination (R2) of 0.92. Note that the specific relationship between the WDPT and S/S0 given by Equation (2) is media-specific (here, for the sand used in these experiments). It does, however, reflect the impact of the WDPT on early-stage infiltration into water repellent soil, which is controlled by the sorptivity. Through the use of Philip’s cumulative infiltration equation, Shillito et al. [52] demonstrated the effect of the altered sorptivity on infiltration; as the sorptivity decreased, so did the infiltration. More details on the theory of infiltration are presented in the SM and Shillito et al. [52]. The WDPT, effective contact angle, and relative sorptivity associated with the experimental burn conditions are shown in Table 2.

Dried Jeffrey pine (Pinus jeffreyi) duff containing needles and small branches was used as biomass fuel for our pilot burning experiments (Figure S4a; SM). As discussed in Section 1, Jeffrey pine duff is representative of fuels burnt in many wildland fires in the western U.S. [10,53,58]. The intensity and size of these western U.S. wildfires have increased in the last two decades, with Jeffrey and ponderosa pine (Pinus ponderosa) needles and small branches being dominant fuels [59,60,61]. These fires are having important effects on human and forest health and on the environment [62,63]. Our fuel samples were collected from the forest floor near Truckee, CA, USA and were stored in black plastic bags at room temperature (20 ± 2 °C) until used for the combustion experiments.
The set-up of the combustion experiment is presented in detail in Figure S2 (SM). Briefly, 1 kg of fuel was placed onto the burn platform (ceramic disc) inside of the DRI combustion chamber, which was recently described elsewhere [64,65]. During the combustion experiment, an additional 2 kg of fuel was gradually added onto the burn platform via our fuel delivery system (Figure S4; SM). The duration of the combustion experiment was ~1 h. Table 1 summarizes all the prepared and analyzed sand and ash samples. To study how organic species in the smoke affected soil water repellency with an absence of combustion heat, we packed a glass cartridge with blank sand and used a medium-volume sampler to collect smoke with a sampling line at a flow rate of ~85 L min−1. The sampling was stopped when combustion ended and no more smoke was present in the chamber. To prepare Sample XII (experimental sand with fulvic acid), a solution of Suwannee River fulvic acid (10 mg mL−1) was made in ultra-high purity water and sprayed over the blank sand (Figure S3; SM), which was then dried at room temperature (20 ± 2 °C) for at least four hours. The samples after the combustion experiment and fulvic acid sample (Sample XIII), heated at 200 °C, were cooled down to room-temperature (20 ± 2 °C) prior to WDPT measurements.

3.2. Water Repellency and Hydraulic Properties of Sand and Ash

In this pilot study, we investigated how biomass-burning emissions and the heat of the fire affected SWR. Soil surrogate (i.e., silica sand) samples were exposed to Jeffrey pine duff smoke at different proximities to a pine needle fire under laboratory conditions and to fulvic acid, a surrogate soil organic matter. The WDPT was measured for all samples, and the effective contact angle and sorptivity were calculated. We found that the water repellency of the silica sand samples changed from wettable (WDPT < 0.5 s) to severe-to-extreme levels (WDPT > 1000 s) after being exposed to smoke and heat or to just cold smoke. These results suggest that the organic compounds from smoke can greatly increase SWR, even in the absence of fire heat. Our experiments with the silica sand samples exposed to fulvic acid confirmed this finding; the SWR of the sand samples greatly increased (WDPT = 81 s) after being treated with fulvic acid, and the SWR further increased to a severe level (WDPT > 81 s) after subsequent heating at 200 °C. The changes in the calculated contact angles and relative sorptivities showed that sorptivity-controlled water infiltration of the untreated sand can be reduced by more than half after exposure to either fire emissions or fulvic acids with and without the presence of heat. The results of our study highlight the need for future research focused on the fundamental chemistry of SOM during fires and on the effects of combustion smoke organics on SWR with and without the presence of heat.

This research was supported in part by internal funding from the Division of Atmospheric Sciences, Desert Research Institute and by the National Science Foundation (NSF) under grants AGS-1544425, IIA-1301726 and EAR-1324894.

Data is contained within the article or supplementary material. The data presented in this study are available in the Supplementary Material and/or can be provided via e-mail upon the request ([email protected]).

The authors would like to thank David Campbell for collecting Jeffrey pine duff. 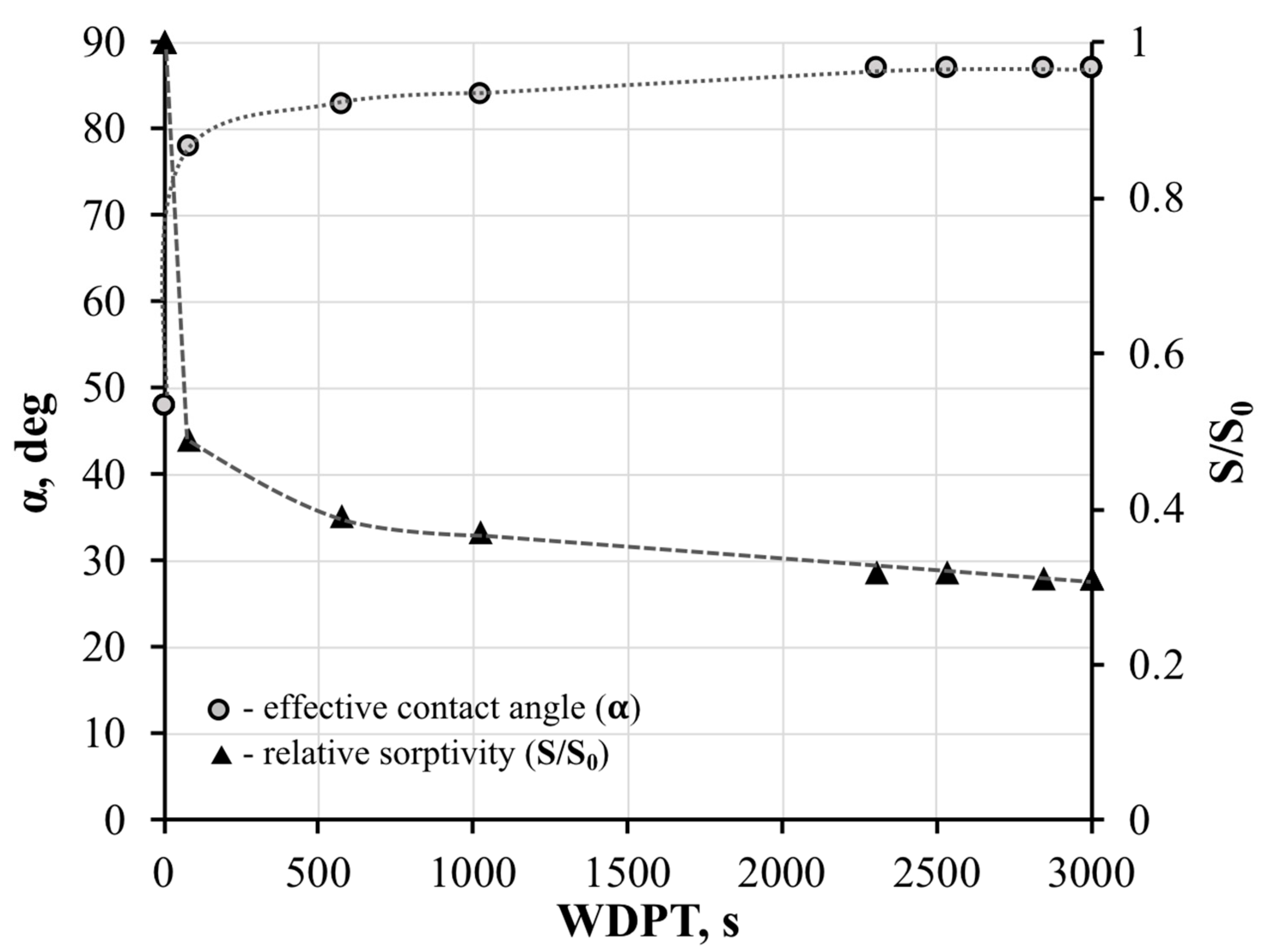