Using the Landsat Burned Area Products to Derive Fire History Relevant for Fire Management and Conservation in the State of Florida, Southeastern USA
Next Article in Special Issue

Large forest fires have repeatedly affected Europe, in particular the Mediterranean countries. It is now crucial to continue the effort to feed the several layers of prediction models and understand how wildfire spreads in order to develop modern preventative and mitigation methods. The present study evaluates the performance of Sentinel 5-P TROPOMI for the monitoring of carbon monoxide (CO) and methane (CH4) during extreme fire events in Portugal, focusing on the Monchique (2018) and Vila de Rei/Mação (2019) wildfires, which devastated 27,154 ha and 9249 ha, respectively. The spatial distribution and trend of CO and CH4 prior to, during, and following the fire event were accessed and linked with in situ data in a qualitative and quantitative exploration. Large CO plumes were observed with CO columns exceeding 4.5 × 1018 and 6 × 1018 molecules/cm2 on 21 July 2019, and 7 August 2018, respectively. CO distribution profiles after consecutive digital processing steps showed the ability to follow CO fluctuations according to the fire spread. Furthermore, statistically significant differences were found between CO emissions inside and outside the burning area in both fire events. Finally, the CO2 estimated through CO column data presented an emission of 7.6 × 1019 molecules/cm2 for the uppermost emission day on 7 August 2018. Although CH4 monitoring is still unwavering to draw exact conclusions, the CO patterns during extreme fire events show promising and consistent data when compared with in situ data. View Full-Text
Keywords: remote sensing; sentinel 5-P; TROPOMI; extreme wildfires; carbon monoxide; methane remote sensing; sentinel 5-P; TROPOMI; extreme wildfires; carbon monoxide; methane
►▼ Show Figures 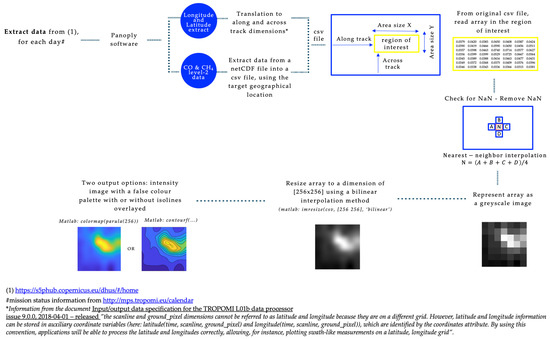