Factors Associated with Structure Loss in the 2013–2018 California Wildfires

Tens of thousands of structures and hundreds of human lives have been lost in recent fire events throughout California. Given the potential for these types of wildfires to continue, the need to understand why and how structures are being destroyed has taken on a new level of urgency. We compiled and analyzed an extensive dataset of building inspectors’ reports documenting homeowner mitigation practices for more than 40,000 wildfire-exposed structures from 2013–2018. Comparing homes that survived fires to homes that were destroyed, we investigated the role of defensible space distance, defensive actions, and building structural characteristics, statewide and parsed into three broad regions. Overall, structural characteristics explained more of a difference between survived and destroyed structures than defensible space distance. The most consistently important structural characteristics—having enclosed eaves, vent screens, and multi-pane windows—were those that potentially prevented wind-born ember penetration into structures, although multi-pane windows are also known to protect against radiant heat. In the North-Interior part of the state, active firefighting was the most important reason for structure survival. Overall, the deviance explained for any given variable was relatively low, suggesting that other factors need to be accounted for to understand the full spectrum of structure loss contributors. Furthermore, while destroyed homes were preferentially included in the study, many “fire-safe” structures, having > 30 m defensible space or fire-resistant building materials, were destroyed. Thus, while mitigation may play an important role in structure survival, additional strategies should be considered to reduce future structure loss. View Full-Text
Keywords: defensible space; building construction; homeowner mitigation; firefighting; defensive actions; fire safety defensible space; building construction; homeowner mitigation; firefighting; defensive actions; fire safety
►▼ Show Figures 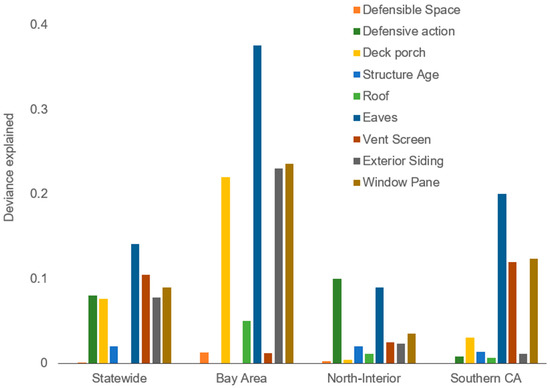