The region comprising of East Central Europe, South East Europe and Turkey contributed to the SISAL (Speleothem Isotopes Synthesis and AnaLysis) global database with stable carbon and oxygen isotope time-series from 18 speleothems from 14 caves. The currently available oldest record from the studied region is the ABA-2 flowstone record (Abaliget Cave; Hungary) reaching back to MIS 6. The temporal distribution of the compiled 18 records from the region points out a ~20 kyr-long period, centering around 100 ka BP, lacking speleothem stable isotope data. The regional subset of SISAL_v1 records displays a continuous coverage for the past ~90 kyr for both δ13C and δ18O, with a mean temporal resolution of ~12 yr for the Holocene, and >50 yr for the pre-Holocene period. The highest temporal resolution both for the Holocene and the pre-Holocene was achieved in the So-1 record (Sofular Cave; Turkey). The relationship between modern day precipitation δ18O (amount weighted annual and winter season mean values; 1961–2017) and climatological parameters was evaluated. The strong positive correlation found in East Central Europe reinforces the link between modern day precipitation δ18O, temperature and large-scale circulation (North Atlantic Oscillation) expected to be preserved in the speleothem δ18O record; while a negative relationship was documented between precipitation amount and oxygen isotope compositions in South East Europe. Variations of δ13C values are primarily interpreted as reflecting dry/wet periods across the region. Elevation gradients from three non-overlapping periods of the last ~5 kyr indicated elevation gradients around −0.26‰ per 100 m−1 for calcite δ18O. View Full-Text
Keywords: speleothems; carbon and oxygen stable isotopes; paleohydroclimate speleothems; carbon and oxygen stable isotopes; paleohydroclimate
►▼ Show Figures 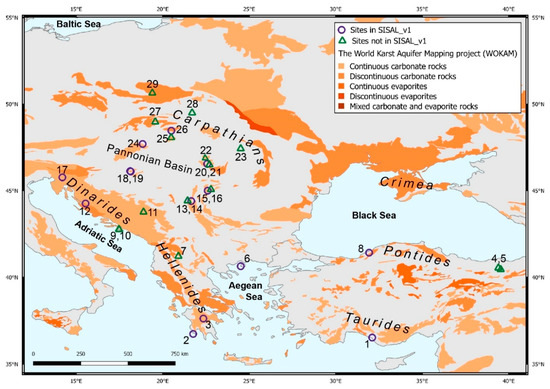