Speleothems from the Middle East: An Example of Water Limited Environments in the SISAL Database

The Middle East (ME) spans the transition between a temperate Mediterranean climate in the Levant to hyper-arid sub-tropical deserts in the southern part of the Arabian Peninsula (AP), with the complex alpine topography in the northeast feeding the Euphrates and Tigris rivers which support life in the Southeastern Fertile Crescent (FC). Climate projections predict severe drying in several parts of the ME in response to global warming, making it important to understand the controls of hydro-climate perturbations in the region. Here we discuss 23 ME speleothem stable oxygen isotope (δ18Occ) records from 16 sites from the SISAL_v1 database (Speleothem Isotope Synthesis and Analysis database), which provide a record of past hydro-climatic variability. Sub-millennial changes in ME δ18Occ values primarily indicate changes in past precipitation amounts the result of the main synoptic pattern in the region, specifically Mediterranean cyclones. This pattern is superimposed on change in vapor source δ18O composition. The coherency (or lack thereof) between regional records is reviewed from Pleistocene to present, covering the Last Glacial Maximum (~22 ka), prominent events during deglaciation, and the transition into the Holocene. The available δ18Occ time-series are investigated by binning and normalizing at 25-year and 200-year time windows over the Holocene. Important climatic oscillations in the Holocene are discussed, such as the 8.2 ka, 4.2 ka and 0.7 ka (the Little Ice Age) Before Present events. Common trends in the normalized anomalies are tested against different climate archives. Finally, recommendations for future speleothem-based research in the region are given along with comments on the utility and completeness of the SISAL database. View Full-Text
Keywords: SISAL database; speleothem; cave; isotopes; Middle East; palaeoclimate SISAL database; speleothem; cave; isotopes; Middle East; palaeoclimate
►▼ Show Figures 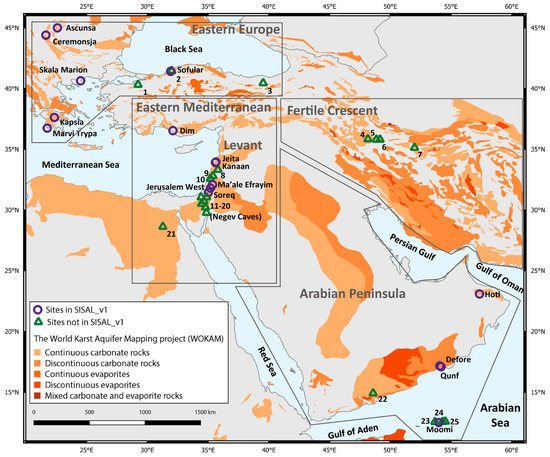