Deciduous Tusks and Small Permanent Tusks of the Woolly Mammoth, Mammuthus primigenius (Blumenbach, 1799) Found on Beaches in The Netherlands
Previous Article in Journal

New Material and Revision of the Carnivora, Mammalia from the Lower Pleistocene Locality Apollonia 1, Greece

During the last field campaigns in the mammal fossiliferous site Apollonia 1 (Macedonia, Greece), new carnivoran material has been discovered. The new collection added two new carnivoran taxa, Homotherium latidens and Panthera gombaszögensis. The new canid material and the revision of the old one (a) suggest the presence of two Canis species, C. etruscus and C. apolloniensis; (b) confirm the presence of the hypercarnivore Lycaon lycaonoides, and (c) allow for re-classifying the vulpine material to Vulpes praeglacialis. The taxonomic status of the species C. apolloniensis and Meles dimitrius is discussed. The composition and diversity of the Apollonia carnivoran assemblage are estimated and compared to those of various Greek and European Villafranchian ones. The results suggest close similarity to the Venta Micena (Spain) and Dmanisi (Georgia) carnivoran assemblages. The biochronological evidence indicates that Apollonia 1 is younger than Venta Micena and older than Untermassfeld (Germany), suggesting an age of 1.3–1.0 Ma. The study of the carnivoran guild structure of Apollonia 1 in comparison to the modern ones from known environments, as well as their functional morphology, suggest an open habitat, agreeing with previous interpretations. View Full-Text
Keywords: carnivora; Early Pleistocene; Greece; systematics; biochronology; palaeoecology carnivora; Early Pleistocene; Greece; systematics; biochronology; palaeoecology
►▼ Show Figures 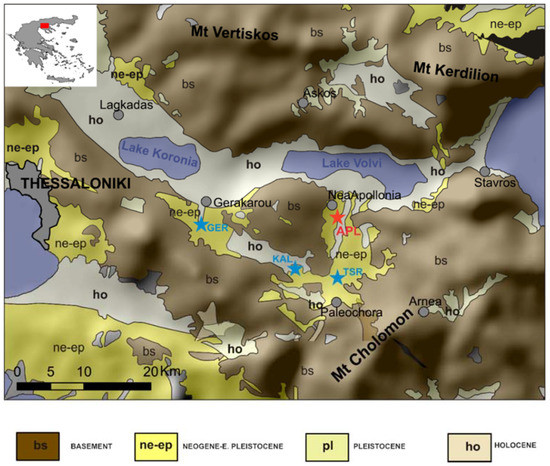