Elephant and Mammoth Hunting during the Paleolithic: A Review of the Relevant Archaeological, Ethnographic and Ethno-Historical Records

Proboscideans and humans have shared habitats across the Old and New Worlds for hundreds of thousands of years. Proboscideans were included in the human diet starting from the Lower Paleolithic period and until the final stages of the Pleistocene. However, the question of how prehistoric people acquired proboscideans remains unresolved. Moreover, the effect of proboscidean hunting on the eventual extinction of these mega-herbivores was never seriously evaluated, probably because of the lack of acquaintance with the plethora of information available regarding proboscidean hunting by humans. The aim of this paper is to bridge this gap and bring to light the data available in order to estimate the extent and procedures of elephant and mammoth hunting by humans during the Quaternary. This study examines the archaeological evidence of proboscidean hunting during Paleolithic times, and provides a review of ethnographic and ethno-historical accounts, demonstrating a wide range of traditional elephant-hunting strategies. We also discuss the rituals accompanying elephant hunting among contemporary hunter-gatherers, further stressing the importance of elephants among hunter-gatherers. Based on the gathered data, we suggest that early humans possessed the necessary abilities to actively and regularly hunt proboscideans; and performed this unique and challenging task at will. View Full-Text
Keywords: proboscidean; hunting strategies; Paleolithic; human-proboscidean interaction proboscidean; hunting strategies; Paleolithic; human-proboscidean interaction
►▼ Show Figures 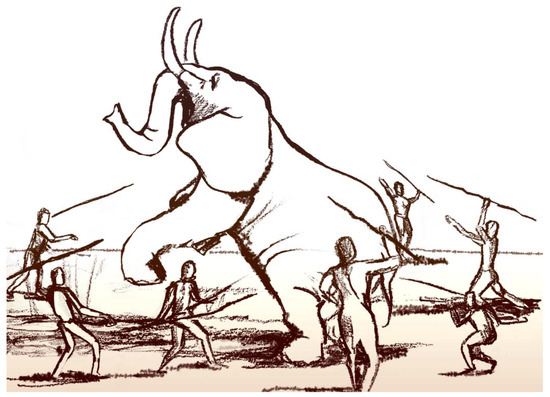 Agam, A.; Barkai, R. Elephant and Mammoth Hunting during the Paleolithic: A Review of the Relevant Archaeological, Ethnographic and Ethno-Historical Records. Quaternary 2018, 1, 3. https://doi.org/10.3390/quat1010003


Agam A, Barkai R. Elephant and Mammoth Hunting during the Paleolithic: A Review of the Relevant Archaeological, Ethnographic and Ethno-Historical Records. Quaternary. 2018; 1(1):3. https://doi.org/10.3390/quat1010003


Agam, Aviad; Barkai, Ran. 2018. "Elephant and Mammoth Hunting during the Paleolithic: A Review of the Relevant Archaeological, Ethnographic and Ethno-Historical Records" Quaternary 1, no. 1: 3. https://doi.org/10.3390/quat1010003