clear
Please note that, as of 21 September 2020, High-Throughput has been renamed to BioTech and is now published here.
Open AccessArticle

Influence of the Ovine Genital Tract Microbiota on the Species Artificial Insemination Outcome. A Pilot Study in Commercial Sheep Farms

To date, there is a lack of research into the vaginal and sperm microbiome and its bearing on artificial insemination (AI) success in the ovine species. Using hypervariable regions V3–V4 of the 16S rRNA, we describe, for the first time, the combined effect of the ovine microbiome of both females (50 ewes belonging to five herds) and males (five AI rams from an AI center) on AI outcome. Differences in microbiota abundance between pregnant and non-pregnant ewes and between ewes carrying progesterone-releasing intravaginal devices (PRID) with or without antibiotic were tested at different taxonomic levels. The antibiotic treatment applied with the PRID only altered Streptobacillus genus abundance, which was significantly lower in ewes carrying PRID with antibiotic. Mageebacillus, Histophilus, Actinobacilllus and Sneathia genera were significantly less abundant in pregnant ewes. In addition, these genera were more abundant in two farms with higher AI failure. Species of these genera such as Actinobacillus seminis and Histophilus somni have been associated with reproductive disorders in the ovine species. These genera were not present in the sperm samples of AI rams, but were found in the foreskin samples of rams belonging to herd 2 (with high AI failure rate) indicating that their presence in ewes’ vagina could be due to prior transmission by natural mating with rams reared in the herd. View Full-Text
Keywords: microbiota; sheep; reproductive tracts; artificial insemination (AI) microbiota; sheep; reproductive tracts; artificial insemination (AI)
►▼ Show Figures 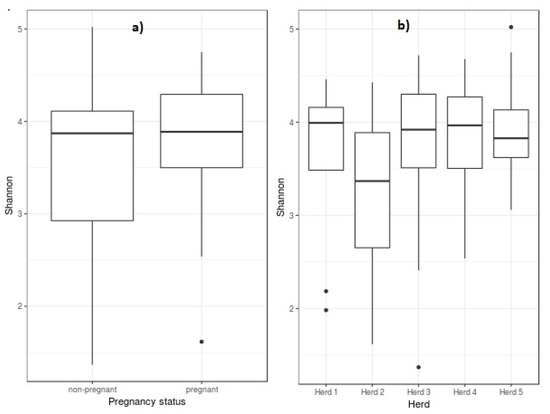