Durability of Composite Materials under Severe Temperature Conditions: Influence of Moisture Content and Prediction of Thermo-Mechanical Properties During a Fire

The present paper discusses the statistical features of static fatigue for E-glass multifilament tows in water. In such an aggressive environment, the glass fibres are sensitive to slow crack propagation from micron-sized flaws. Rupture and interrupted static fatigue tests under constant deformation in water, as well as tensile tests in inert environments on tows after fatigue were carried out on E-glass fibre tows that comprised around 2000 single filaments. The slow crack growth constants and the fast fracture statistical parameters for filaments were extracted from the outcome of experiments on tows, i.e., the load relaxation curves during fatigue and stress-strain curves during the tensile tests. These parameters provide a pertinent data base for the prediction of several characteristics in various conditions of fatigue for filaments and tows including statistical distributions of lifetimes and residual strengths, strength degradation during fatigue, size effects on lifetime and tow residual behaviour. Equations for calculation of filament lifetime and residual strength, and tow tensile behaviour were based on the model of slow crack growth and Weibull statistical distribution. Calculations using strength-probability-time relations provided insight into static fatigue behaviour of tows in water. Validity of the approach was assessed by the comparison of experimental and predicted tow residual behaviours. View Full-Text
Keywords: static fatigue; slow crack growth; fracture; fibres; strength; rupture time; fracture statistics static fatigue; slow crack growth; fracture; fibres; strength; rupture time; fracture statistics
►▼ Show Figures 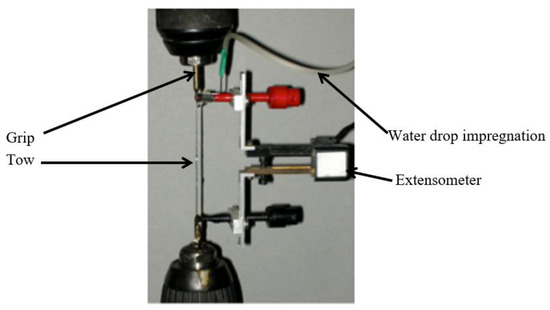