Operational Protocols for the Use of Drones in Marine Animal Research

Many coastal shark species are known to use estuaries of the coastal southeastern United States for essential purposes like foraging, reproducing, and protection from predation. Temperate estuarine landscapes, such as the Rachel Carson Reserve (RCR) in Beaufort, NC, are dynamic habitat mosaics that experience fluctuations in physical and chemical oceanographic properties on various temporal and spatial scales. These patterns in abiotic conditions play an important role in determining species movement. The goal of this study was to understand the impact of environmental conditions around the RCR on shark density within the high-abundance summer season. Unoccupied Aircraft System (UAS) surveys of coastal habitats within the reserve were used to quantify shark density across varying environmental conditions. A combination of correlation analyses and Generalized Linear Modelling (GLM) revealed that density differs substantially across study sites and increases with rising water temperatures, conclusions that are supported by previous work in similar habitats. Additionally, density appears to increase moving towards dawn and dusk, potentially supporting crepuscular activity in coastal estuarine areas. By describing shark density dynamics in the RCR, this study provides new information on this population and presents a novel framework for studying elasmobranchs in temperate estuaries. View Full-Text
Keywords: elasmobranchs; UAS; animal density; wildlife monitoring; technology; shark elasmobranchs; UAS; animal density; wildlife monitoring; technology; shark
►▼ Show Figures 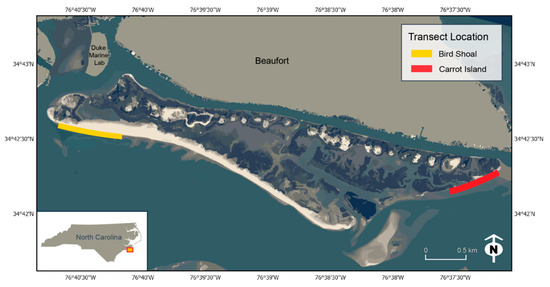