Item-based collaborative filtering is one of the most popular techniques in the recommender system to retrieve useful items for the users by finding the correlation among the items. Traditional item-based collaborative filtering works well when there exists sufficient rating data but cannot calculate similarity for new items, known as a cold-start problem. Usually, for the lack of rating data, the identification of the similarity among the cold-start items is difficult. As a result, existing techniques fail to predict accurate recommendations for cold-start items which also affects the recommender system’s performance. In this paper, two item-based similarity measures have been designed to overcome this problem by incorporating items’ genre data. An item might be uniform to other items as they might belong to more than one common genre. Thus, one of the similarity measures is defined by determining the degree of direct asymmetric correlation between items by considering their association of common genres. However, the similarity is determined between a couple of items where one of the items could be cold-start and another could be any highly rated item. Thus, the proposed similarity measure is accounted for as asymmetric by taking consideration of the item’s rating data. Another similarity measure is defined as the relative interconnection between items based on transitive inference. In addition, an enhanced prediction algorithm has been proposed so that it can calculate a better prediction for the recommendation. The proposed approach has experimented with two popular datasets that is Movielens and MovieTweets. In addition, it is found that the proposed technique performs better in comparison with the traditional techniques in a collaborative filtering recommender system. The proposed approach improved prediction accuracy for Movielens and MovieTweets approximately in terms of 3.42% & 8.58% mean absolute error, 7.25% & 3.29% precision, 7.20% & 7.55% recall, 8.76% & 5.15% f-measure and 49.3% and 16.49% mean reciprocal rank, respectively. View Full-Text
Keywords: item-based collaborative filtering; cold-start problem; genre; asymmetric correlation; transitive inference item-based collaborative filtering; cold-start problem; genre; asymmetric correlation; transitive inference
►▼ Show Figures 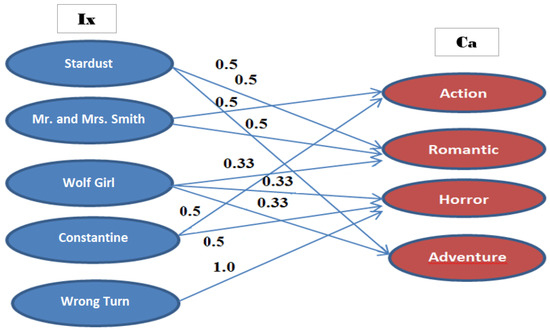