WIPO Re:Search—A Platform for Product-Centered Cross-Sector Partnerships for the Elimination of Schistosomiasis
Previous Article in Journal

Is Australia Neglecting the Local Topography When It Comes to Catastrophic Costs and Ending Tuberculosis?
Previous Article in Special Issue

The transmission of some schistosome parasites is dependent on the planorbid snail hosts. Bulinus truncatus is important in urinary schistosomiasis epidemiology in Africa. Hence, there is a need to define the snails’ phylogeography. This study assessed the population genetic structure of B. truncatus from Giza and Sharkia (Egypt), Barakat (Sudan) and Madziwa, Shamva District (Zimbabwe) using mitochondrial cytochrome oxidase subunit 1 gene (COI) and internal transcribed spacer 1 (ITS 1) markers. COI was sequenced from 94 B. truncatus samples including 38 (Egypt), 36 (Sudan) and 20 (Zimbabwe). However, only 51 ITS 1 sequences were identified from Egypt (28) and Sudan (23) (because of failure in either amplification or sequencing). The unique COI haplotypes of B. truncatus sequences observed were 6, 11, and 6 for Egypt, Sudan, and Zimbabwe, respectively. Also, 3 and 2 unique ITS 1 haplotypes were observed in sequences from Egypt and Sudan respectively. Mitochondrial DNA sequences from Sudan and Zimbabwe indicated high haplotype diversity with 0.768 and 0.784, respectively, while relatively low haplotype diversity was also observed for sequences from Egypt (0.334). The location of populations from Egypt and Sudan on the B. truncatus clade agrees with the location of both countries geographically. The clustering of the Zimbabwe sequences on different locations on the clade can be attributed to individuals with different genotypes within the population. No significant variation was observed within B. truncatus populations from Egypt and Sudan as indicated by the ITS 1 tree. This study investigated the genetic diversity of B. truncatus from Giza and Sharkia (Egypt), Barakat area (Sudan), and Madziwa (Zimbabwe), which is necessary for snail host surveillance in the study areas and also provided genomic data of this important snail species from the sampled countries. View Full-Text
Keywords: phylogeography; Bulinus truncatus; planorbidae; Africa phylogeography; Bulinus truncatus; planorbidae; Africa
►▼ Show Figures 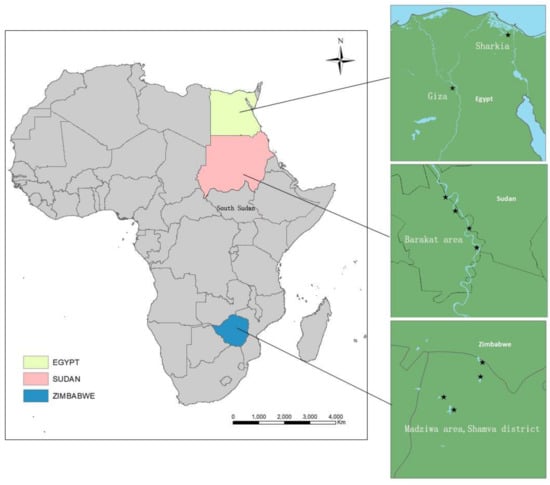