Schistosoma infection in snails can be monitored by microscopy or indirectly by sentinel mice. As both these approaches can miss infections, more sensitive tests are needed, particularly in low-level transmission settings. In this study, loop-mediated isothermal amplification (LAMP) technique, designed to detect a specific 28S ribosomal Schistosoma japonicum (Sj28S) gene with high sensitivity, was compared to microscopy using snail samples from 51 areas endemic for schistosomiasis in five Chinese provinces. In addition, the results were compared with those from polymerase chain reaction (PCR) by adding DNA sequencing as a reference. The testing of pooled snail samples with the LAMP assay showed that a dilution factor of 1/50, i.e., one infected snail plus 49 non-infected ones, would still result in a positive reaction after the recommended number of amplification cycles. Testing a total of 232 pooled samples, emanating from 4006 snail specimens, showed a rate of infection of 6.5%, while traditional microscopy found only 0.4% positive samples in the same materials. Parallel PCR analysis confirmed the diagnostic accuracy of the LAMP assay, with DNA sequencing even giving LAMP a slight lead. Microscopy and the LAMP test were carried out at local schistosomiasis-control stations, demonstrating that the potential of the latter assay to serve as a point-of-care (POC) test with results available within 60–90 min, while the more complicated PCR test had to be carried out at the National Institute of Parasitic Diseases (NIPD) in Shanghai, China. In conclusion, LAMP was found to be clearly superior to microscopy and as good as, or better than, PCR. As it can be used under field conditions and requires less time than other techniques, LAMP testing would improve and accelerate schistosomiasis control. View Full-Text
Keywords: Schistosoma japonicum; Oncomelania hupensis; snail; 28S ribosomal DNA; PCR; loop-mediated isothermal amplification (LAMP); pooled samples; China Schistosoma japonicum; Oncomelania hupensis; snail; 28S ribosomal DNA; PCR; loop-mediated isothermal amplification (LAMP); pooled samples; China
►▼ Show Figures 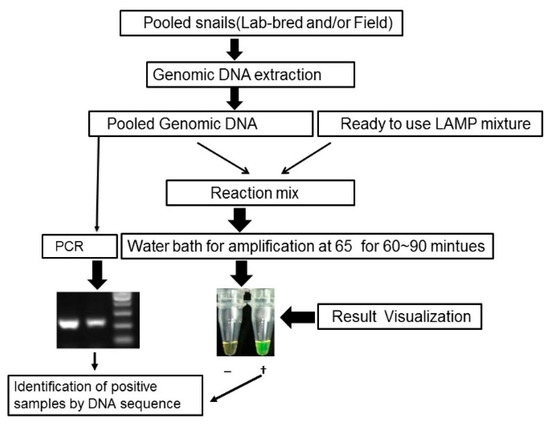