Coverage, Timelines, and Determinants of Incomplete Immunization in Bangladesh

In Australia, amoebiasis is thought to occur in travellers, immigrants from endemic areas, and among men who have sex with men. Prevalence of amoebiasis in communities with immigrants from Entamoeba histolytica-endemic countries is unknown. The present study is a retrospective case series analysis of patients with laboratory-confirmed amoebiasis from Western Sydney Local Health District, Australia, between years 2005 and 2016. Forty-nine patients with amoebiasis were identified, resulting in an estimated annual incidence of up to 1.1 cases per 100,000 adults. Many were born in Australia (15/47) and India (12/47). Three patients (3/37) had no history of overseas travel, two others had not travelled to an endemic country, and an additional two had a very remote history of overseas travel; one died of fulminant amoebic colitis. Three patients (3/16) were employed in the food industry and one had a history of colonic irrigation in an Australian ‘wellness clinic’. Patients had invasive amoebiasis with either liver abscess (41/48) or colitis (7/48), diagnosed most commonly by serology. Invasive procedures were common, including aspiration of liver abscess (28/41), colonoscopy (11/49), and partial hepatectomy (1/49). Although rare, local acquisition of amoebiasis occurs in Western Sydney and contributes to significant morbidity and hospital admissions. View Full-Text
Keywords: amoebiasis; Entamoeba histolytica; endemic; local acquisition; colitis; liver abscess amoebiasis; Entamoeba histolytica; endemic; local acquisition; colitis; liver abscess
►▼ Show Figures 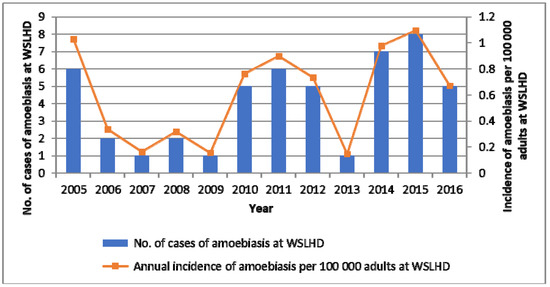