Modelling Adaptation through Social Allostasis: Modulating the Effects of Social Touch with Oxytocin in Embodied Agents
Previous Article in Journal

This research investigates the effect of different user characteristics on the perception and evaluation of an agent’s appearance variables. Therefore, two different experiments have been conducted. In a 3 × 3 × 5 within-subjects design (Study 1; N = 59), three different target groups (students, elderly, and cognitively impaired people) evaluated 30 different agent appearances that varied in species (human, animal, and robot) and realism (high detail, low detail, stylized shades, stylized proportion, and stylized shade with stylized proportion). Study 2 (N = 792) focused on the effect of moderating variables regarding the same appearance variables and aims to supplement findings of Study 1 based on a 3 × 5 between-subjects design. Results showed effects of species and realism on person perception, users’ liking, and using intention. In a direct comparison, a higher degree of realism was perceived as more positive, while those effects were not replicated in Study 2. Further on, a majority evaluated nonhumanoid agents more positively. Since no interaction effects of species and realism have been found, the effects of stylization seem to equally influence the perception for all kind of species. Moreover, the importance of the target group’s preference was demonstrated, since differences with regard to the appearance evaluation were found. View Full-Text
Keywords: human–agent interaction; visual appearance; age differences; user characteristics; realism; species human–agent interaction; visual appearance; age differences; user characteristics; realism; species
►▼ Show Figures 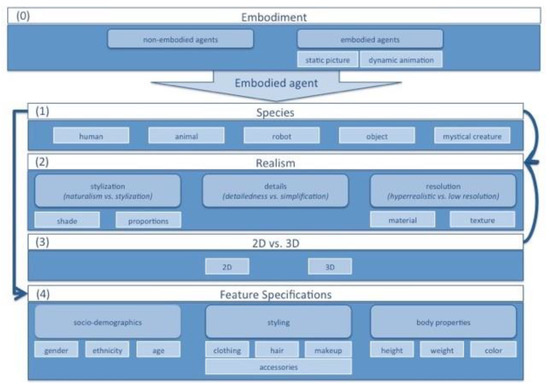 
Straßmann C, Krämer NC. A Two-Study Approach to Explore the Effect of User Characteristics on Users’ Perception and Evaluation of a Virtual Assistant’s Appearance. Multimodal Technologies and Interaction. 2018; 2(4):66. https://doi.org/10.3390/mti2040066


Straßmann, Carolin, and Nicole C. Krämer. 2018. "A Two-Study Approach to Explore the Effect of User Characteristics on Users’ Perception and Evaluation of a Virtual Assistant’s Appearance" Multimodal Technologies and Interaction 2, no. 4: 66. https://doi.org/10.3390/mti2040066