Design for an Art Therapy Robot: An Explorative Review of the Theoretical Foundations for Engaging in Emotional and Creative Painting with a Robot

Social robots are being designed to help support people’s well-being in domestic and public environments. To address increasing incidences of psychological and emotional difficulties such as loneliness, and a shortage of human healthcare workers, we believe that robots will also play a useful role in engaging with people in therapy, on an emotional and creative level, e.g., in music, drama, playing, and art therapy. Here, we focus on the latter case, on an autonomous robot capable of painting with a person. A challenge is that the theoretical foundations are highly complex; we are only just beginning ourselves to understand emotions and creativity in human science, which have been described as highly important challenges in artificial intelligence. To gain insight, we review some of the literature on robots used for therapy and art, potential strategies for interacting, and mechanisms for expressing emotions and creativity. In doing so, we also suggest the usefulness of the responsive art approach as a starting point for art therapy robots, describe a perceived gap between our understanding of emotions in human science and what is currently typically being addressed in engineering studies, and identify some potential ethical pitfalls and solutions for avoiding them. Based on our arguments, we propose a design for an art therapy robot, also discussing a simplified prototype implementation, toward informing future work in the area. View Full-Text
Keywords: social robots; art therapy; emotions; creativity; art robots; therapy robots social robots; art therapy; emotions; creativity; art robots; therapy robots
►▼ Show Figures 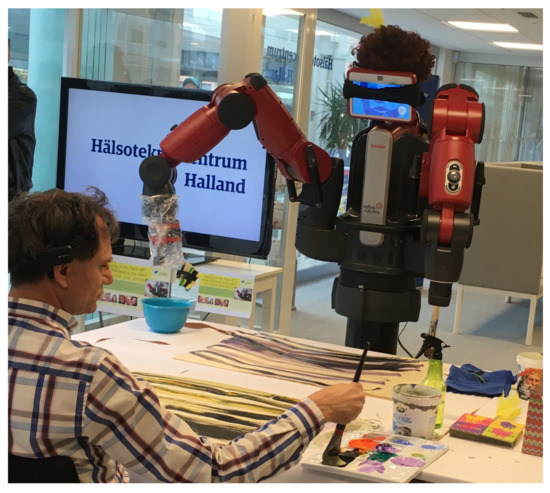 Cooney, M.D.; Menezes, M.L.R. Design for an Art Therapy Robot: An Explorative Review of the Theoretical Foundations for Engaging in Emotional and Creative Painting with a Robot. Multimodal Technol. Interact. 2018, 2, 52. https://doi.org/10.3390/mti2030052


Cooney MD, Menezes MLR. Design for an Art Therapy Robot: An Explorative Review of the Theoretical Foundations for Engaging in Emotional and Creative Painting with a Robot. Multimodal Technologies and Interaction. 2018; 2(3):52. https://doi.org/10.3390/mti2030052


Cooney, Martin D., and Maria L.R. Menezes 2018. "Design for an Art Therapy Robot: An Explorative Review of the Theoretical Foundations for Engaging in Emotional and Creative Painting with a Robot" Multimodal Technologies and Interaction 2, no. 3: 52. https://doi.org/10.3390/mti2030052