Study on the Evolution of the Source-Flow-Sink Pattern of China’s Chunyun Population Migration Network: Evidence from Tencent Big Data
Previous Article in Journal

In this study, the physiological response of a sensitive lichen species (Evernia prunastri) exposed for three months in a complex urban area (Milan, Italy) was evaluated in order to verify if the air pollution abatement measures adopted over the years resulted in a suitable air quality for the survival of this sensitive species. Parameters investigated rely on the photosynthetic activity of the photobiont (Fv/Fm, PIabs, and OJIP curves), damage to mycobiont (membrane damage and antiradical activity), and the production of secondary metabolites involved in the protective functions of the organisms. Results showed that although air quality in Milan still suffers from heavy pollution from PM and NOx, the overall situation is not as severe as to induce the death of this sensitive biomonitor, at least in the short term. Nevertheless, the vital status of the samples exposed in the study area showed a significant impairment compared to that of samples exposed in a control area, indicating that the current air quality in Milan still prevents the optimal survival of E. prunastri. View Full-Text
Keywords: lichens; secondary metabolites; ecophysiological parameters; air quality lichens; secondary metabolites; ecophysiological parameters; air quality
►▼ Show Figures 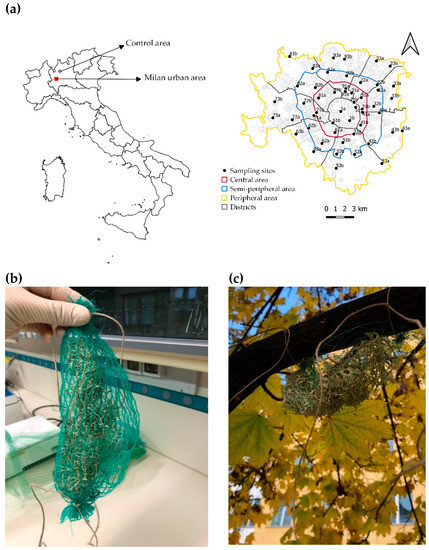