Aiding Users in Green IS Adoption with Persuasive Systems Design

Message Sent, Now What? A Critical Analysis of the Heat Action Plan in Ahmedabad, India

To protect public health, heat-related policies are increasingly being adopted by city authorities to address the unequal impact of heatwaves. Ahmedabad’s Heat Action Plan (HAP) is an acclaimed and successful policy response in India and beyond. While the pilot evaluation of the initiative suggests that almost a thousand deaths were avoided annually after its implementation, it is not yet clear whose lives were saved, and to what extent this statistic was due to the HAP, rather than other factors. By reviewing the published and grey literature centering on the HAP target groups, outreach strategies, and impacts on urban services, this paper points out major knowledge gaps concerning the potentials and impacts of the HAP, which may lead to the systematical exclusion of vulnerable and disadvantaged groups from the intended benefits. In this paper, it is argued that the effectiveness and inclusiveness of the HAP predominantly depend on its integration into urban development projects, which is a challenging task given the existing horizontal and vertical fragmentation in the planning of city projects. Moreover, urban plans and policies, including the HAP, are shown to be overly focused on technology, and as a consequence, they do not realize their limited scope in addressing the associated issues, which are fundamentally social, deep, and structural, such as spatial inequality in Indian cities. View Full-Text
Keywords: heatwaves; inequality; urban heat vulnerability; Heat Action Plan; urban policy; India heatwaves; inequality; urban heat vulnerability; Heat Action Plan; urban policy; India
►▼ Show Figures 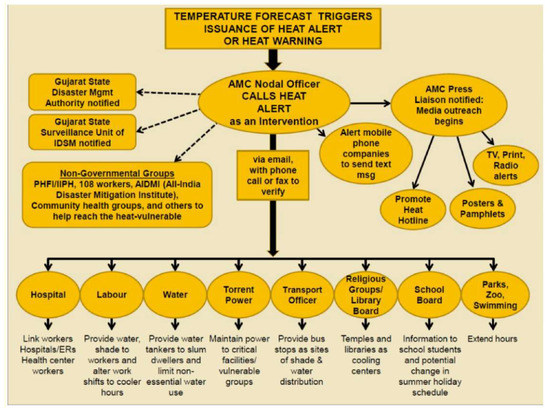