Anatomy of an Informal Transit City: Mobility Analysis of the Metropolitan Area of Lima
Previous Article in Journal

Homeless Interactions with the Built Environment: A Spatial Pattern Language of Abandoned Housing

Structure of Plot Systems and Economic Activity in Cities: Linking Plot Types to Retail and Food Services in London, Amsterdam and Stockholm

Plot systems (also referred to as “property”, “parcel”, or “lot”) are generally recognised as the organisational framework of urban form that contributes to the economic performance of cities. However, studies that link the spatial form of plots to economic data are limited. The paper builds on the theory of Webster and Lai, which argues that the process of urbanisation is aligned with increased subdivision of property rights (increased division of land into plots, for example) due to the process of economic specialisation that is typical of cities. The aim of the paper is to test this theory by analysing whether there is a correlation between: (a) the shape and structure of plot systems, which are classified as types based on three plot metrics (size, compactness, and frontage index) and b) economic activity, measured as the concentration of retail and food activities per plot. The paper will use statistical analysis to relate plot types to economic activity in three European cities (London, Amsterdam, and Stockholm). The results provide empirical support for our initial hypothesis and Webster and Lai’s theory, which states that plots of smaller size, more regular shape, and smaller frontage generally correspond to a higher concentration of economic activity in cities. View Full-Text
Keywords: plot systems; plot types; spatial morphology; property rights; economic activity; economic specialisation plot systems; plot types; spatial morphology; property rights; economic activity; economic specialisation
►▼ Show Figures 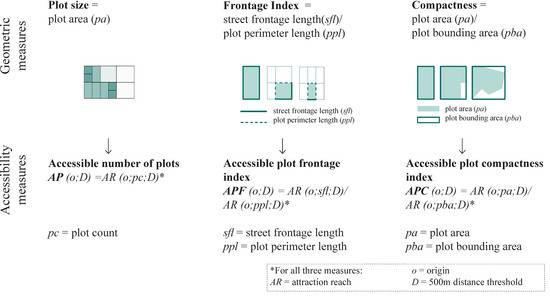