Is the Location of Warehouses Changing in the Belo Horizonte Metropolitan Area (Brazil)? A Logistics Sprawl Analysis in a Latin American Context

Many municipalities in the US are deploying urban planning approaches to resolve problems caused by urban sprawl, particularly the lack of support for physical activity. Although a variety of perspectives on the relationship between physical activity and built environment exist, many studies have suggested objective and reliable measures of urban form that encourage more opportunities for physical activity. Thus, based on the research context, this study builds a Geographic Information System (GIS) model using geospatial dimensions, yields a visualized map ranked by composite scores, and reveals the spatial distribution of quantified cells. Through the Jacksonville case study, it is shown that the GIS-based visualization method provides an expanded set of tools that can help urban planners and public health professionals understand the relationships between urban form and potential for active living. Consequently, these map-based visualized results provide valuable information to health and public policy professionals to coordinate and resolve mutual challenges.
Keywords: active built environment; GIS; geospatial dimension; physical activity; urban form active built environment; GIS; geospatial dimension; physical activity; urban form

Figure 2 presents the GIS modeling results. The map shows the scored cells, which are mainly between 3 and 6, as well as their spatial distributions. In descriptive statistics, this case ranges from 0.06 to 8.94 (M = 2.86, SD = 1.84). The distributions of active built environment index are skewed to the right since the mean is greater than the median (2.54). To distinguish the pattern, cells above upper quartile value, which is 4.06, are split. As shown in Figure 3, higher-scored cells—cell value above 4.06—are concentrated inside I-295 and partially stretch out along 103rd Street, Normandy Boulevard, West Beaver Street, North Main Street, Mt Pleasant Road, Atlantic Boulevard, Beach Boulevard, and San Hose Boulevard. The GIS modeling results reveal that the area inside I-295 contains more active built environment features than other areas.

3.2. Applicaton of the GIS Modeling Results

The GIS modeling result demonstrates the indexed spatial pattern of active living potential by relevant geospatial dimensions. Using the zonal statistic function, the average value of the scored cells that belong to the parcel are computed. Figure 4 shows the average value of the cells for each parcel and their spatial patterns. In descriptive statistics, this case ranges from 0.28 to 8.85 (M = 4.53, SD = 1.54). Though the mean (4.53) and the median (4.50) are very close, the distributions of residential parcels’ scores are slightly skewed to the right since the mean is greater than the median.

3.2.1. Which Residential Types Have Higher (or Lower) Chances of Involving Physical Activity?

3.2.2. Which Residential Types Are Highly Clustered with Higher Opportunities for Active Living?

As shown in Figure 2 and Figure 3, areas inside I-295 and along major roads have more potential for active living. While Figure 4 shows a broad spatial pattern of parcels, another analysis is helpful in identifying statistically significant hot spots, cold spots, and spatial outliers. Using Anselin Local Moran’s I statistic of spatial association, the results distinguish between statistically significant clusters of high values (HH), clusters of low values (LL), outliers in which high values are surrounded primarily by low values (HL), and outliers in which low values are surrounded primarily by high values (LH) at the 95% confidence level [54]. Figure 5 illustrates the cluster and outlier results. Although parts of major roads are identified as areas with higher value at Figure 3 (except Mt Pleasant Road and Beach Boulevard), higher-scored areas (i.e., 103rd Street, Normandy Boulevard, West Beaver Street, North Main Street, Atlantic Boulevard, and San Hose Boulevard) are recognized as spatial outliers in which a high value is surrounded primarily by low values.
Table 2 shows cluster and outlier analysis by type of residential parcel. Excluding outliers and statistically insignificant results, 41% of single-family parcels are assessed as clustered lower value while about 38% of the parcels are assessed as clustered higher value. The vacant residential parcels indicate results similar to those shown by single-family parcels (about 37% of clustered higher value and 48% of clustered lower value). However, the multifamily parcels include about 81% of clustered higher value compared to only 10% clustered lower value. Using these results, policymakers and urban planners will be able to prioritize areas clustered with lower values to improve the active living potential of current and future residents.

My a priori assumption is that higher active built environment index would be mostly in the central area of the city due to available destinations and street network. As expected, areas having more active living potential are found inside I-295. However, other higher index regions are also located along several streets not in the central areas since these streets are close to identified destinations (e.g., grocery stores, schools and recreational space) and active transportation modes (e.g., bus routes and sidewalk). Although these extended areas along the streets turn out mostly spatial outliers (see Figure 5), this could also imply that urban planning intervention, such as adding new parks, might aid residents to live in active built environments.
To objectively measure the ways in which built environment affects physical activity, this paper describes the development of a comprehensive active built environment index to include relevant GIS variables, which represent geospatial dimensions of active living potential. The cell-based results of suitability modeling could not only identify areas in which residents will most likely become involved in physical activity, but also pinpoint other areas to urban planners or public health professionals that need to be developed to increase a region’s conduciveness to physical activity. The Jacksonville case study demonstrates both GIS-based visualization results and a potential toolset that can be used by policymakers, urban planners, and public health professionals to support the physical activity of residents. That is, urban planners or public health professionals could use the visualized results from this study as a broad resource to enhance physical activity opportunities of the study area. In addition to visualizing the existing conditions, if the planning or design intervention happens, this model could simulate the visualized effect of new intervention. Also, although this study employed a static model—having only ten variables weighted the same—increasing the GIS capacity could support a more dynamic model that would be more responsive to variable or weight changes over time.
This study employs parcel-level data to determine the variables of active built environment from a considerable amount of related studies. However, with the modeling process, the destinations from parcel data are not perfectly matched with existing literature. For example, to identify grocery stores, parcels including supermarkets and neighborhood or community shopping centers are used. However, it is possible that small retail shops might serve as a neighborhood grocery store for a certain area. Although FDOR data show a certain level of details, since the data might not have actual functions of the parcel, it is possible that this standardized FDOR database misses some information.
Regarding the entropy index, though the entropy calculation is generally an acceptable method to calculate land use diversity, the arguments about the entropy method should be noted. First, it has been shown that associations between walking and land use mix depend on which land uses are included in the calculation of entropy scores [55]. Second, land use mix might not be a strong predictor of walking. A review study has shown that 2 out of 4 studies on land use mix (entropy) and walking for transport found non-significant associations between them [56]. Third, entropy scores may not be correctly calculated in terms of the denominator, which is count of land uses [57]. Although there are the arguments of calculating the land use diversity, a considerable study concluded that land use diversity has a positive association with physical activity [4,13,14,15,16,17].
Another measurement used in the GIS model is a proximity measure using raster surfaces. This measurement is close to accessibility measurement which typically computes an ease of access to available destinations using distances between origins and destinations as a core frame [58,59,60]. This approach is convenient and valuable since it can be easily associated with zone-based datasets such as census boundary or transportation analysis zone. However, it has been recognized that zone-based analysis has a modifiable areal unit problem (MAUP), which indicates that the specific boundaries such as census block, census block group, or zip code make an impact on the accessibility results [58,61]. In other words, even at the same parcel or census block, the accessibility might not be identical. Since aforementioned methodologies used zone-based analysis, they might have MAUP [41,42,43,44,45]. However, the cell-based method utilized in this study compensates for MAUP by use of controllable cell size. Since a 5-m cell was used as the unit of analysis, each cell value could apply to any level of geographic unit even at the parcel level. In the results section, it is demonstrated how the raster layer is applicable to other geographic units by using the average scores of parcels instead of using a single value by parcel.
However, there are several limitations to this study. First, this study uses only quantified data. Researchers have argued that qualitative variables such as safety, comfort (which could include speed of traffic or speed limits) and pleasurability might make an impact on walkability [62]. However, to apply these qualitative variables, it is necessary to examine a local context of the study areas since the significance of those qualitative variables might be different by the context. In future research, after thorough studies regarding the local conditions, these qualitative variables could be considered in the modeling process. Second, this study uses the same weights for the combined layers since this study focuses more on the development of the GIS tool to evaluate active built environment. However, typical suitability modeling uses weighted layers to allow each variable to affect the model differently. Thus, future research may consider establishing an appropriate weight for each variable. Finally, this study assesses built environment regarding physical activity potential. However, recent developments in smartphone and smartwatch technology are enabling researchers to analyze the actual movements of people [63,64]. Therefore, in future research, tracking the movement patterns of residents via wearable smart devices would enable the examination of the relationships between actual physical activities and active living potential measures developed in this study. Such data would tremendously enhance the methodology adopted in this study. 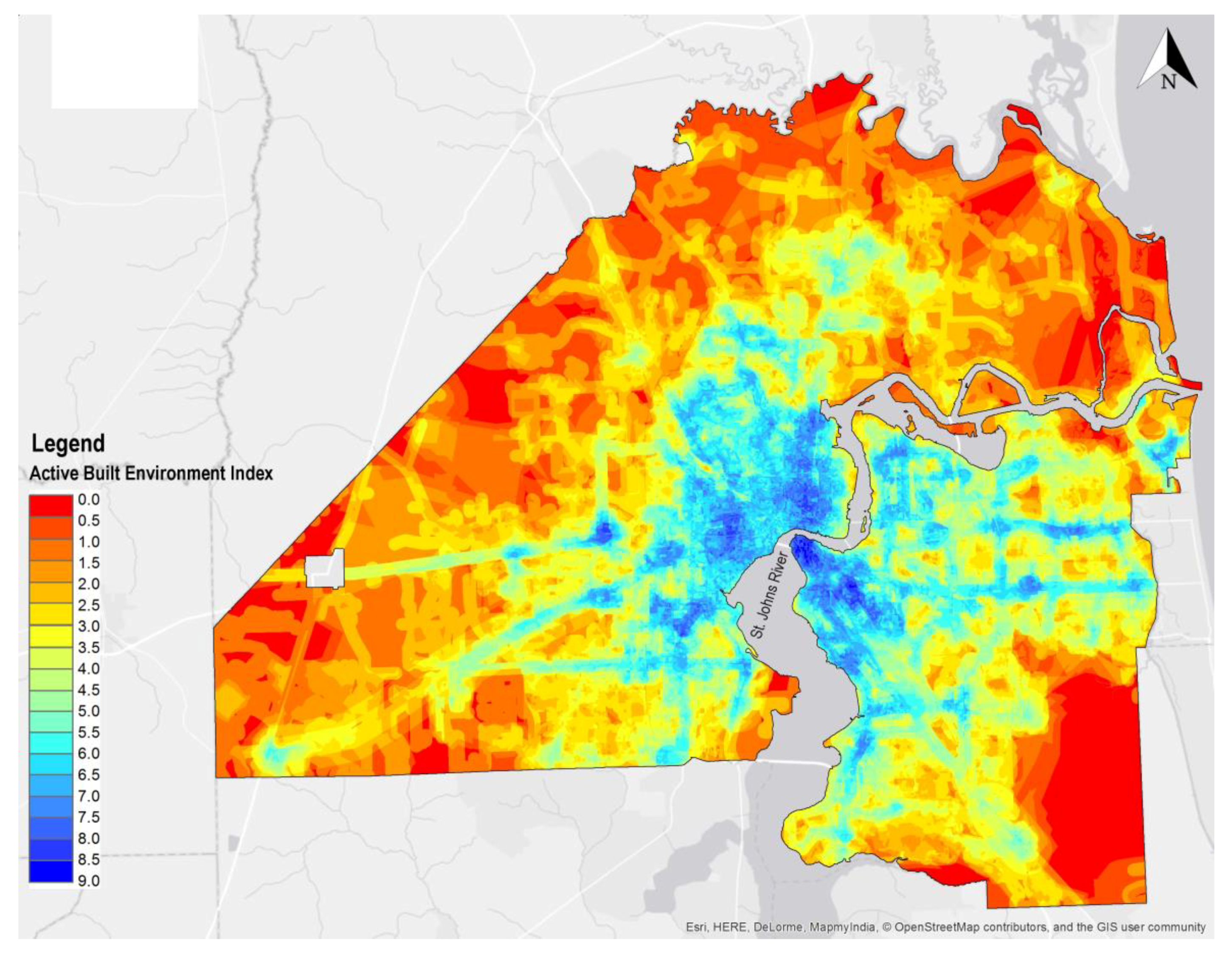 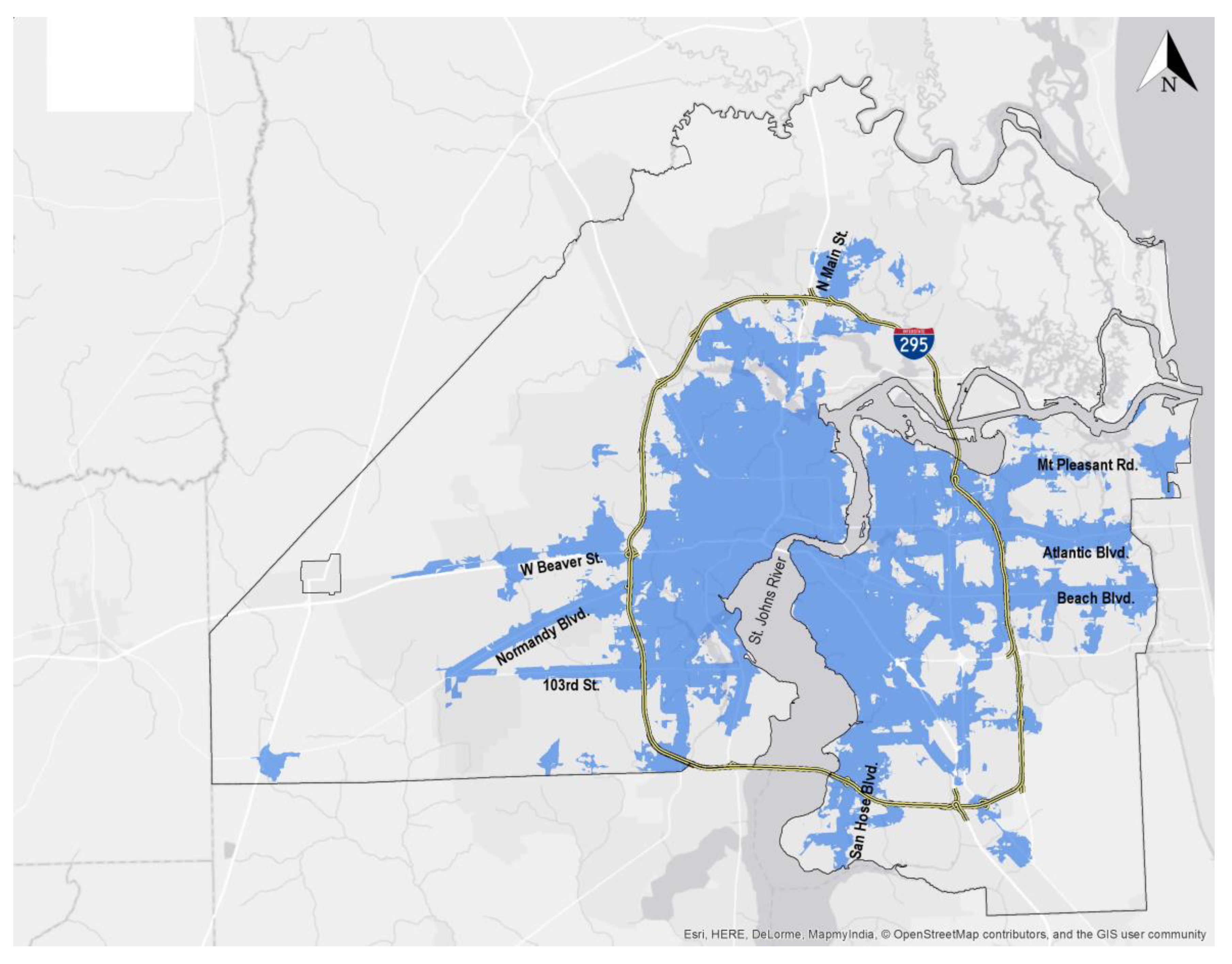 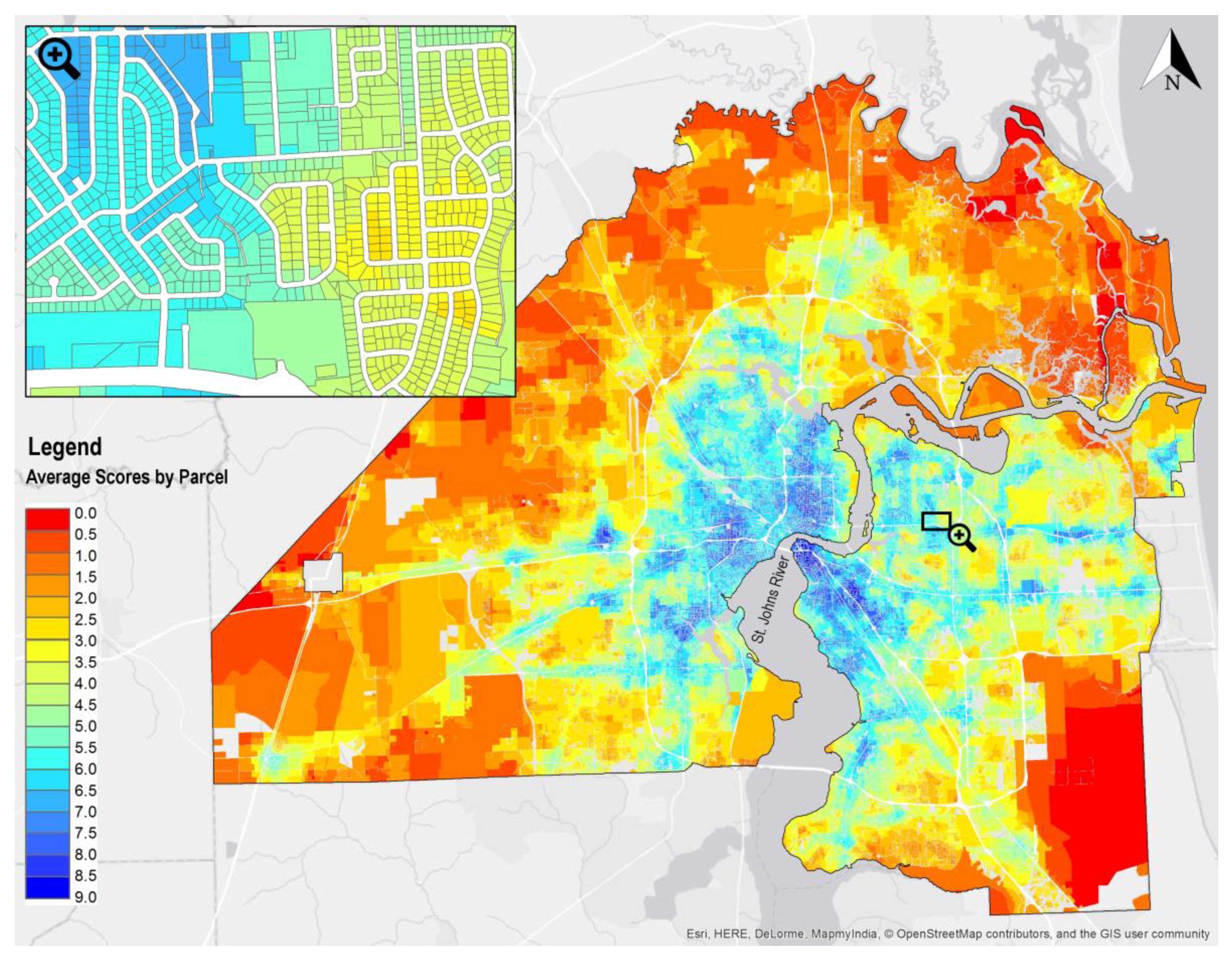 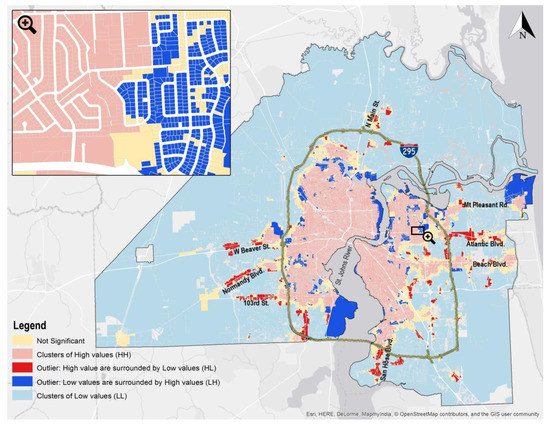 Table 2. Cluster and outlier analysis by residential parcel type.
Table 2. Cluster and outlier analysis by residential parcel type.
* HH: Cluster of High values; HL: High value surrounded by Low value (Outlier); LH: Low value surrounded by High value (Outlier); LL: Cluster of Low values; NS: Not Significant.
© 2018 by the author. Licensee MDPI, Basel, Switzerland. This article is an open access article distributed under the terms and conditions of the Creative Commons Attribution (CC BY) license (http://creativecommons.org/licenses/by/4.0/).
We use cookies on our website to ensure you get the best experience. Read more about our cookies here.
Accept
We have just recently launched a new version of our website. Help us to further improve by taking part in this short 5 minute survey here. here.
Never show this again