Estimation of Particulate Matter Impact on Human Health within the Urban Environment of Athens City, Greece
Previous Article in Journal

Barcelona’s New Chinatown: Chinese Strategies in the Housing Market in Barcelona and Globalization

Globalization of the urban real estate market, which was originally local, has generated new capital flows worldwide that have reinforced the secondary circuit. Barcelona has not been immune to this process, at least since Spain’s integration into the European Union in 1986. Many legal changes in foreign investment regulations have been introduced in Spain, especially in the housing market. The latest major investments in real estate have been made by former socialist countries, notably the People’s Republic of China and Russia, which both belong to the BRICS group. Chinese localization strategies have been more concentrated. With this theoretical background, the aim of the paper is to analyze the strategies of these recent appropriations of Barcelona’s residential space, in the framework of other economic Chinese investments and in competition with other Mediterranean ports. The main conclusion of this study is related to the definition of arcelona’s Chinatown, its changing location, and processes of social differentiation. View Full-Text
Keywords: housing market; real estate; foreign investment; globalization; Chinatown; Barcelona housing market; real estate; foreign investment; globalization; Chinatown; Barcelona
►▼ Show Figures 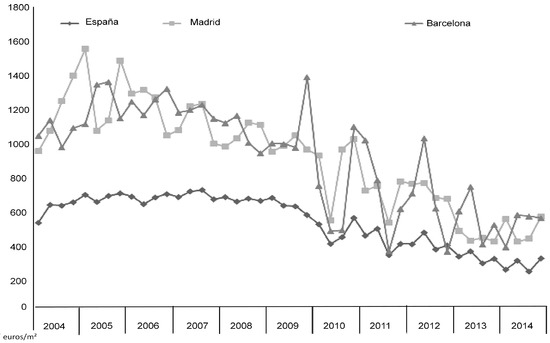